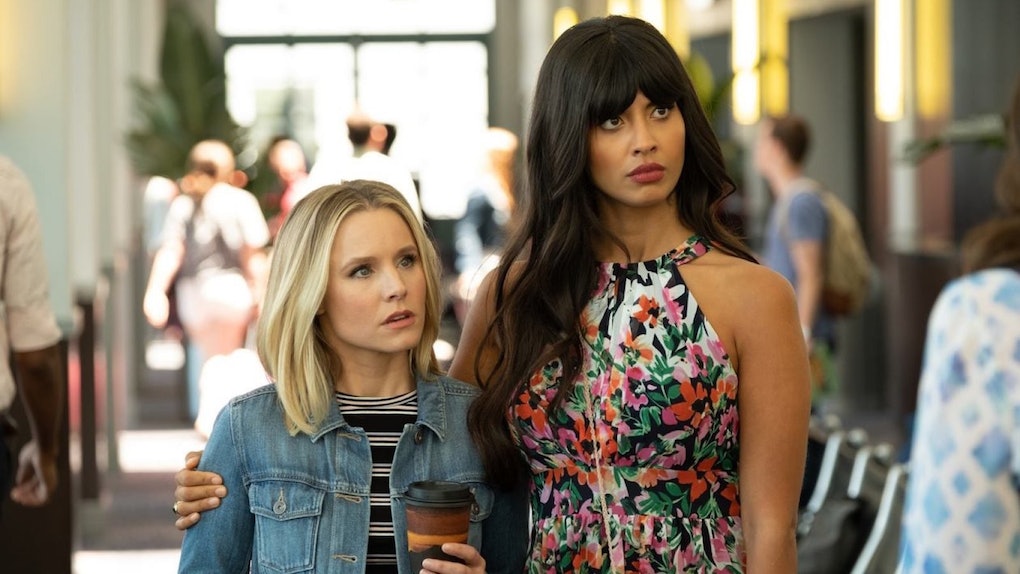 When Does 'The Good Place' Season 4 Premiere? This September Just Got A Whole Lot Better

They have been to the Bad Place, the Medium Place, the Good Place (kind of), and a lot of Places in between, so every The Good Place fan is eagerly waiting to see where the final season of the show takes Eleanor, Chidi, Tahani, Jason, Michael, and Janet. Sadly, showrunner Mike Schur recently announced that the upcoming fourth season of his afterlife comedy will be its final one, and now NBC has revealed when those final episodes will begin airing. So, when does The Good Place Season 4 premiere? Fans finally have an official premiere date that they can put on their calendars.

As with its three previous seasons, the fourth season of The Good Place will premiere towards the end of September this year. So get ready for the end of the afterlife journey, because the final season will premiere on Thursday, Sept. 26, NBC just revealed. Yep — that is only three months away, so start rewatching the first three seasons of The Good Place now so you will be ready for what is sure to be a completely unexpected finale this fall.

The Good Place's fourth season will air in the middle of NBC's new Thursday night line-up, famously a two-hour block of beloved comedy shows. The fifth season of Superstore will premiere on Sept. 26 at 8 p.m. ET, followed by the series premiere of the Bradley Whitford-led choir comedy Perfect Harmony, then The Good Place final season premiere, and closed off by the series premiere of Kal Penn's immigration comedy Sunnyside.

Mike Schur announced that this upcoming season would be The Good Place's final run in a message on Twitter at the start of June. The note clarified that ending the show with Season 4 is a creative decision rather than a network cancellation, so fans can rest assured that they will get the ending that the series has been intending all along.

The final season of The Good Place will pick up where Season 3 left off, and Mike Schur even dropped a few hints about what fans can expect from the farewell season. Spoiler alert: Don't read on if you have not finished The Good Place Season 3. In the finale of this past season, Eleanor, Chidi, Tahani, Jason, and Michael managed to broker a deal with the Judge and Shawn that if they could show replicate Michael's fake-Good Place experiment with four new humans and prove that they can become better people in the afterlife, then their souls would be spared from the Bad Place. However, Michael has a panic attack when the new residents begin to arrive so Eleanor has to pretend to be the neighborhood's architect. And in a heartbreaking twist, Chidi is forced to have his memory wiped when his Simone is revealed to be one of the new residents, leaving him with no memory of his relationship with Eleanor.

The first half of the new season will center on Eleanor, Tahani, Jason, Michael, and Janet attempting to succeed in this new experiment while keeping up the rouse of Eleanor being an architect and dealing with the now memory-wiped Chidi.

More like this
'Sex And The City' Reboot: Cast, Premiere Date, Trailer, & More News
By Dylan Kickham
These Fake 'Riverdale' Brand Names Are Even Better Than The Real Thing
By Rachel Varina
'The Witcher' Season 2: Release Date, Cast, Trailer, & More Info
By Ani Bundel
Stay up to date