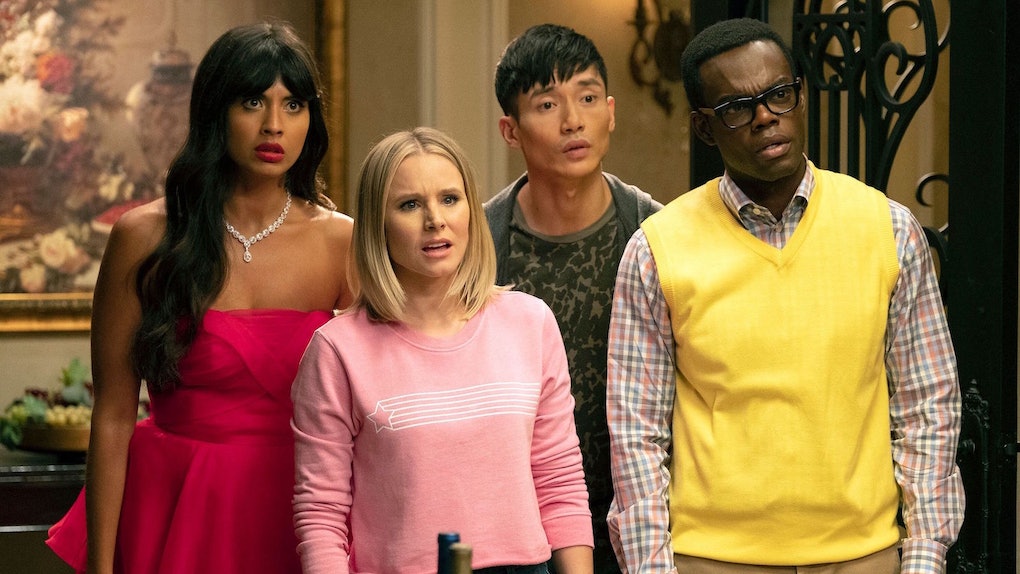 'The Good Place' Is Ending With Season 4, So Start Savoring Every Episode

Eleanor, Chidi, Jason, and Tahani's wild ride through the afterlife is sadly about to come to an end. After three seasons of completely unexpected twists and turns, NBC's supernatural comedy series The Good Place will officially take its final bow at the end of its upcoming fourth season. Yep — The Good Place is ending with Season 4, so get ready for this upcoming finale season to be a major one.

On Friday night, The Good Place showrunner Mike Schur surprised fans by announcing that the show's upcoming Season 4 would serve as its final season. The announcement was made in a note to fans posted by The Good Place's official Twitter account, in which Schur clarified that the show was ending by the decision of himself and the writing staff rather than being canceled by NBC. In the note, Schur shared that he and his fellow writers had been planning to end the show after four seasons ever since the Season 1 finale, given that the unique premise for the series cannot be stretched out for too long in their opinions. Schur concluded the announcement by promising a great final season that will premiere this coming fall. Read the whole note for yourself below:

The fourth season will pick up with the cliffhanger ending of Season 3, which saw Chidi volunteering to erase his memories in order to aid the group's new experiment: repeating Michael's fake Good Place neighborhood to see if they can reform four new humans who were bound for the Bad Place. Mike Schur teased the direction that the show's final season will take in an interview with The Hollywood Reporter, stating that the role reversal of Eleanor, Jason, and Tahani now being in charge of the neighborhood will be a primary focus.

That's the first chunk of episodes: repeating this experiment with these new people and having our crew now shift from students to teachers a bit. That's the plot experiment that's happening. The aftermath is the aftermath, and I won't get into that too much. The themes are the same and the way the stories unfold is a bit different. Instead of our group being the guinea pigs, they're now the scientists.

Mike Schur also revealed that The Good Place Season 4 has a little extra in store for its fans. Scur confirmed that the final season will consist of 14 episodes rather than the 13 that every past season has been made up of, and he also revealed that the series finale will be an hourlong episode rather than the usual half-hour. So even though this is goodbye, at least fans of The Good Place will get some extra time with the show in its finale season.

NBC has not yet announced an official premiere date for The Good Place's fourth and final season, but considering the show's regular airing schedule, it is safe to assume that it will premiere in late September and that the hourlong series finale will probably hit the air in late January or early February of 2020.