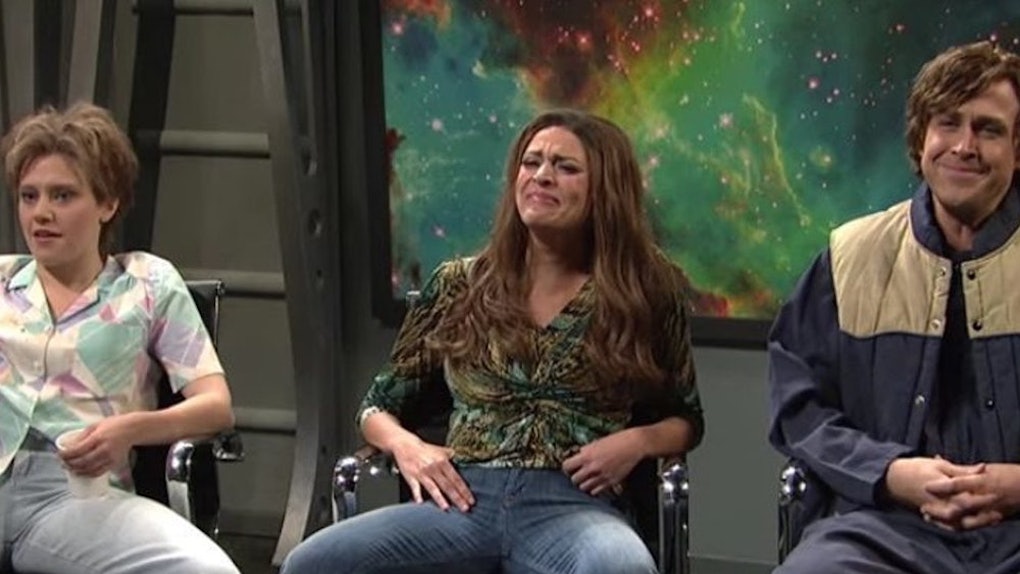 When Does 'Saturday Night Live' Season 44 Premiere? It's Coming So Soon

Saturday has been missing one of its long-running staples over the past few months, but that's about to change. If you've been itching for Kate McKinnon's Mrs. Rafferty or Kenan Thompson's Steve Harvey impression, you don't have to wait too long for a reunion — SNL just announced when it will make its triumphant TV return. When does Saturday Night Live Season 44 premiere? Mark your calendars for Sept. 29. (That's a Saturday, in case that somehow isn't clear.)

Celebrated Saturday Night Live featured players like Aidy Bryant, Beck Bennett, and Leslie Jones are all expected to come back for Season 44. No casting shake-ups have been confirmed as of yet leading up to the season, aside from the news that Luke Null will be exiting the show after one year. New cast members have also not revealed — in addition to Null, last year saw the introduction of Heidi Gardener and Chris Redd, who stepped in following Vanessa Bayer, Bobby Moynihan, and Sasheer Zamata's depatures. If you have not watched Gardner's "Every Boxer's Girlfriend From Every Movie About Boxing Ever" character in action, I suggest you check that out immediately.

Now, I know the real question is: Who are the upcoming hosts and musical guests? Unfortunately, no announcements have been made on that front, but I think fans have a few ideas in mind of who they hope to see.

Saturday Night Live took to its Instagram this week to solicit followers on their dream hosts and performers. Responses ranged from obvious choices like Lady Gaga to fan-fave TV actors like David Harbour (Hopper from Stranger Things), American Horror Story's Evan Peters, and Broad City's Ilana Glazer and Abbi Jacobson. Perhaps the show will actually take these suggestions to heart? Constance Wu or Awkwafina would also be fabulous headliners, especially on the heels of Crazy Rich Asians' success. Tessa Thompson, Amy Adams, Cardi B, and Drake all had big summers, so I wouldn't be surprised to see them at Studio 8H come fall.

Of course, Ariana Grande — who killed it pulling double-duty as both host and musician in 2016 — has her multi-talented hat (or, let's say bunny ears) thrown in the ring. The superstar just released her album Sweetener, so the promotion timing is right. Hmm, why else would people want to see her return to the SNL stage? Oh, right. Her fiancé, Pete Davidson, just happens to be a cast member.

Saturday Night Live is among the nomination leaders at the 2018 Emmys, which are airing Monday, Sept. 17, on NBC. Donald Glover, Alec Baldwin, Tina Fey, and Tiffany Haddish are up for awards for their guest spot performances, and cast members Kenan Thompson, Leslie Jones, Aidy Bryant, and Kate McKinnon all have a chance at going home with acting gold. McKinnon picked up the statue for Best Supporting Actress in both 2016 and 2017, beating out heavy hitters like Judith Light and Alison Janney. Will the woman behind the best Justin Bieber ever pull a three-peat? The odds are SNL will have a lot to celebrate. Weekend Update co-anchors Michael Che and Colin Jost will be on hand for hosting duties, so the Emmys will really be a cast family reunion of sorts before the show gets back to work following the hiatus.

More like this
In 'Riverdale' Season 5, Toni Topaz Is The Black Superwoman Without A Cape
By Erika Hardison
Who Did Emily Poison? 'The Handmaid's Tale' Season 2 Is Off To An Intense Start
By Ani Bundel
Katie Thurston's 'Bachelorette' Season 17: Cast, Premiere Date, & More Info
By Abby Monteil
Stay up to date