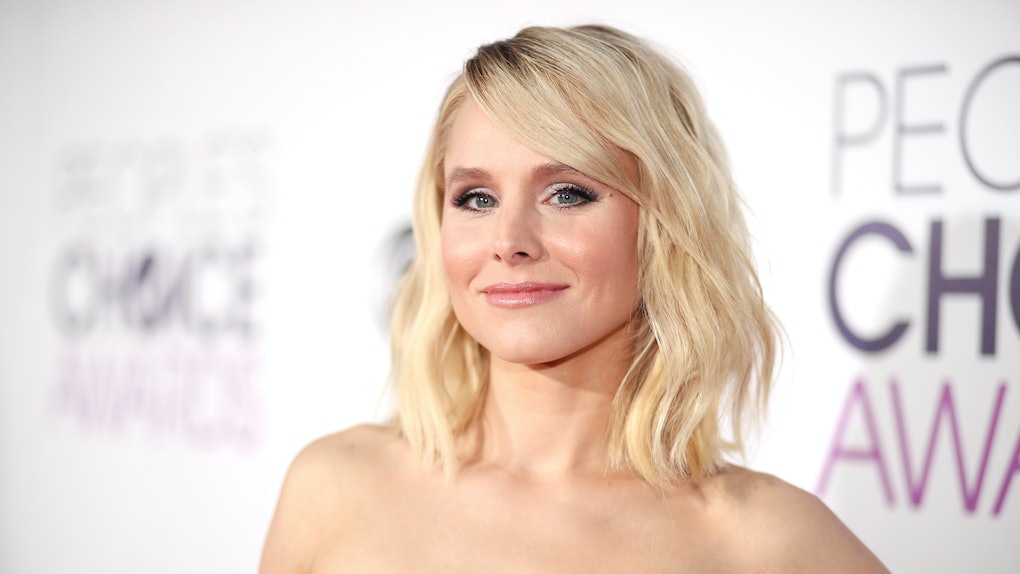 When Does 'Frozen 2' Premiere? Kristen Bell Just Updated Fans On The Sequel

Frozen has just debuted its musical version on Broadway, but for the original movie cast, their focus has been on an entirely new storyline. Voice actors Kristen Bell, Idina Menzel, and more have been working on the sequel to the hit 2013 Disney film, and Princess Anna herself has spilled some new details about the upcoming Frozen 2. Bell slyly answered a few of our major questions about the sequel, making me focus on the biggest one yet: When does Frozen 2 premiere?

Appearing on The Ellen DeGeneres Show. Bell shared all that she could on the in-the-works Frozen 2, which will hit theaters on Nov. 27, 2019. On the talk show, Bell revealed to the audience:

You know I can't say a lot because Disney has people everywhere, but I have recorded the movie. There will be edits before it’s finished but I know the songs, I know the story, it’s very good — I can’t say much more than that or I’ll get in trouble!

No matter what may be in store for the characters in the sequel, the recipe for success that the first film managed to develop is still intact. Original cast members Bell, Menzel, Jonathan Groff, and Josh Gad are all slated to return, while Frozen directors Jennifer Lee and Chris Buck will helm the sequel. Songwriting couple Kristen Anderson-Lopez and Robert Lopez, who became the first double EGOT winner this past awards season, may also have another "Let It Go"-esque hit in store as they compose the new music for the sequel.

PEOPLE reports that after Disney officially confirmed the sequel in 2015, voice recordings for the project began in September 2017. Gad, voicing the energetic and lovable snowman Olaf, even shared a photo of himself in the recording booth alongside members of the film's creative team.

...The amazing people at [Disney] have created a story that carries on the incredible legacy of the original Frozen and continues to build and expand on the characters and themes in new and exciting ways. Unfortunately, that’s all I can tell you right now. But, rest assured Frozen 2 is on the way and damn is it going to be special.

Back in the Disney heyday of the '90s, sequels to the studio's major animated hits were often direct-to-video releases with quite off-putting storylines (I still find Pocahontas 2 heart-wrenching). Although Pixar films have had much better luck with sequels reaching movie theaters, it's a pretty big deal that Frozen 2 will receive a cinematic release. All of its hype also seems totally valid. In a summer 2017 interview with Entertainment Weekly, producer Peter Del Vecho spoke about the process of creating the sequel:

We’re working hard on it. We’re in the development writing process and are very excited by it. Like all movies, it will evolve. Now that we’ve been involved in it for awhile, what’s exciting is it feels like it builds on the first movie. You understand things better in the first movie after you’ve seen the sequel.

For Disney fans anxiously awaiting the sequel, they can always snag a ticket to the new Broadway musical Frozen. While the core elements of the movie are present in the stage version, director Michael Grandage promised to Playbill that the musical will have some uniquely different features:

With this piece of theatre, we can add songs and scenes and take these two huge strands to a much greater place. You can create tension for an audience that knows the story of the film, where you help them believe that we in the theatre may provide a different outcome.

The option to delve back into the original story of Frozen is always there, but I know I definitely can't wait for the new Frozen 2. Here's hoping that Bell and other cast members can reveal more story details soon.

More like this
Emma Stone's 'Cruella': Premiere Date, Trailer, Cast, Plot, & More
By Abby Monteil and Dylan Kickham
This Video Of Disneyland's Marvel's Avengers Campus Is Super
By Cianna Garrison
8 Disney-Themed Charcuterie Board Ideas To Add Some Pixie Dust To Your Movie Night
By Rachel Chapman
Stay up to date