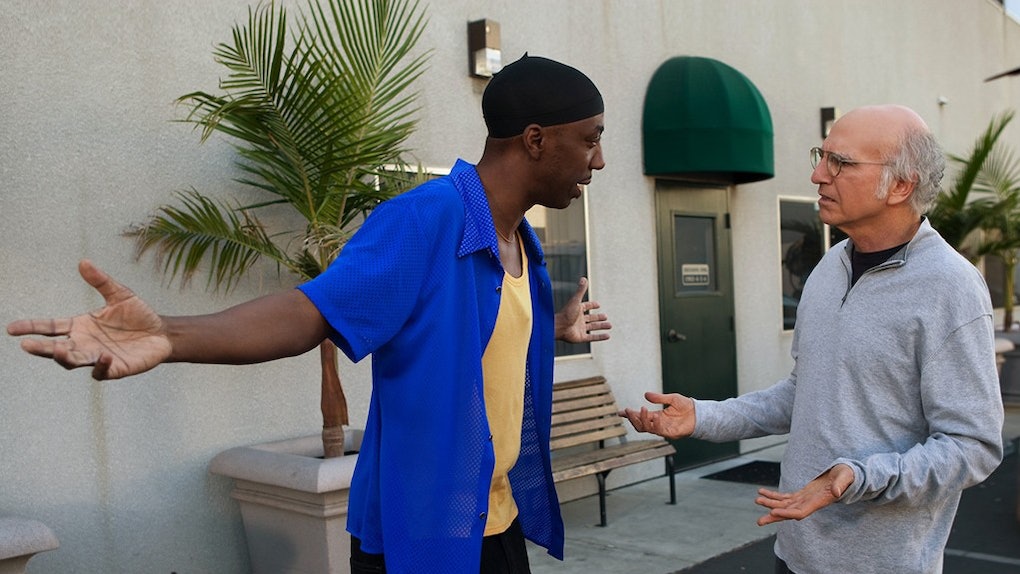 When Does 'Curb Your Enthusiasm' Season 10 Air? J.B. Smoove Spills Some Deets – EXCLUSIVE

J.B. Smoove's Leon Black is ready to bring the ruckus to Curb Your Enthusiasm Season 10. Although he only joined Larry David's HBO sitcom in Season 6, Leon's colorful anecdotes and words of wisdom have become as vital to the show as Larry's own curmudgeon way of life. Curb recently came off a near six-year hiatus with the return of Season 9 in 2017, and longtime fans are already chomping at the bit waiting for Curb Your Enthusiasm Season 10 to return. Elite Daily spoke with J.B. Smoove. Get yours now to talk about the all of the pretty, pretty, pretty, good things fans have to look forward to.

To start off, Smoove tells Elite Daily what is was like getting the Curb gang back together:

Oh, it was great getting back... It felt like we never left because our characters became so popular and so groundbreaking... We picked up right where we left off, and that’s cool because the first day on the set it felt as though we hadn’t missed a beat. And after the first scene we were like, 'Ah, that felt good!'

Curb Your Enthusiasm cemented its groundbreaking status in 2000. The improvised series was unlike anything else and had a way of blurring the lines between character and actor. This quality of the show, combined with the natural-feeling, ever-flowing dialogue, is a huge reason the characters so legendary. Larry David, along with actors like Julia Louis-Dreyfus and Richard Lewis, play exaggerated versions of themselves, while characters like Leon Black are purely fictional.

However, J.B Smoove set out on a mission to bring Leon off the screen and further into reality. Smoove published The Book Of Leon: Philosophy Of A Fool in October of 2017 and successfully transported every possible Leon-ism onto the written page. Although, Smoove warned: "Don’t get caught up in what Leon says, because Leon will ruin your life."

At first I was going to write a J.B. Smoove book, and I got into it and I was like, 'Wow I wish I could write a Leon book, but I don’t own the character…' And then I was doing a scene with Larry, we were just sitting there… and I said 'You know I’m writing a book, right?' And he said 'Wow that’s awesome,' and he said, 'You know what? You should do a Leon book,’ And I said, ‘I didn’t think I could do that because I don’t own the character’ and he said ‘No, no, you should do it, people would love that.'*

And so I went back and just started working on this silly book called The Book of Leon, Philosophy of a Fool and I wanted to write the book in Leon’s true voice… When you read the book I want it to feel like you are Larry… The book is so funny, it’s a good bad advice book and it captures the silliness of the type of dialogue that Leon and Larry have all the time, where Leon over-explains something when he feels like Larry doesn’t get what he’s saying, he goes overboard and over explains with weird parallels.

*It's important to note that Smoove's Larry David impression is spot on.

While the book has fed and and satisfied hungry Curb fans for the better part of the past year, audiences are still desperate for any new information on Season 10.

Smoove, who is the self-proclaimed "spoiler" of the series, reveals some details about the upcoming season:

I don’t have any idea what he’s planning for Season 10, but 10 is a big milestone. I will say this, when I first met Larry in Season 6, and we were talking off camera, and talking about the seasons and how long he was gonna go, and I said look, 'I don't know how long you’re planning on doing this show, but you should do a nice number.' And he said, 'Yeah, I don't know how long we’re gonna go." And I said, 'You know just pick a number, your favorite number, or pick a number where the box set looks good… you can’t pick a weird number.' So I told him to make sure the box set looks balanced and sexy. So, I guess we’ll see what Season 10 is going to be, but I’m looking forward to it… I’m also looking forward to see how long this is going to go.

But don't worry, while waiting for Season 10 to arrive, fans have the unwavering wit and wisdom of Leon Black at their disposal with the Curb Your Enthusiasm: The Complete Ninth Season, which is now available on DVD.