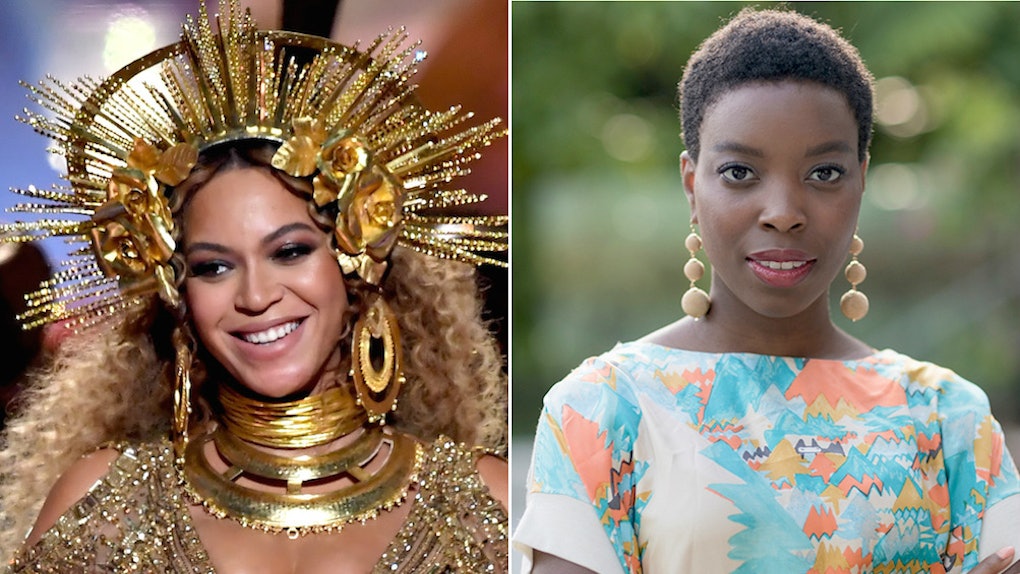 What's It Like Being Beyonce's Underwear Designer? Ade Hassan Reveals All – EXCLUSIVE

Being an entrepreneur is all about finding a hole in a market and filling that need. Live alone and have an itch on your back you can't reach? Hello, back scratcher. Singer needs to be able to record music anywhere, anytime? Hello, high-quality microphones that record directly onto your laptop via USB. Nubian Skin creator Ade Hassan found a hole in the lingerie market, and has filled that need with a line of products Beyoncé herself swears by. So, what's it like being Beyoncé's underwear designer? According to Hassan, whose Nubian Skin bras and briefs "protected the modesty" of Beyoncé and her dancers throughout the Formation World Tour, it's pretty seamless. (Clothing pun not intended.)

She’s Beyoncé. Quite frankly, if she wanted to have everything custom made by whatever massive lingerie brand, she could probably snap her fingers and have that done, but she didn’t.

Nubian Skin quickly became a groundbreaking brand when it debuted in 2014 by providing nude bras, underwear, tights — the works for women of color. It seems absurd, but up until Nubian Skin, it was unnecessarily difficult for women of color to find nude bras that weren't beige — the color that largely only matches the skin tone of white demographics. This shouldn't be necessary to point out to clothing brands, but it's not just white women looking to buy nude underwear. *facepalm*

That's the hole Ade Hassan had the spark of creation to fill. She tells Elite Daily that the idea for the Nubian Skin line came from her own frustrated search for a product that just didn't exist.

Always having dreamt of being an entrepreneur but being stuck in a consulting job she hated, Hassan tells me that the second the idea for Nubian Skin came to mind, she texted a friend saying, "I figured out what I want to do when I grow up."

"After years, and years, and years of never being able to find a nude bra, or going into a shop and asking for skin-tint and you’re basically given a beige bra," she says, "it’s sort of like a lightbulb went off."

She continues, "I went, ‘Oh, my goodness. You know what? That’s what I should do. I can’t find it anywhere, no one else seems to be doing this, and I know that there’s countless other women like me who have the same problem.’"

She was right. Hassan arranged her first Nubian Skin product photo shoot in 2014 and posted a photo from the shoot to Instagram that same week. That weekend, she went on vacation, and her phone blew up with follower notifications. What she didn't know then was she was in the beginning stages of going viral — a concept that, in 2014, was still pretty obscure. But as the follower count kept growing and growing, Hassan realized her good idea might have been more than just a good idea.

"I kept thinking, ‘Woah, 100 people care,’" she says, "Then at the end of that week, we were at 1,000. And at the end of four weeks, we were at 20,000." This was all before NubianSkin.com was even live. So the idea that Hassan had come up with while just searching for the perfect nude bra for herself ended up going viral, with news outlets wanting to interview her about the brand that didn't even have a live website yet.

"That was when I was like, ‘OK, you know what? This has taken on a life of its own, and there’s definitely something here,'" she says.

Outside her dream of being an entrepreneur, Hassan wanted to make women of color feel seen and validated through her products. She wanted to make their lives easier. Having her line worn by Beyoncé on the Formation World Tour was just an added bonus.

That's a pretty small ask, don't you think? But this has been a serious issue for women for color for a long time. That's why, for Hassan, it meant so much that Beyoncé elevated her work.

A lot of the looks on Beyoncé's Formation World Tour, as well as her and JAY-Z's On The Run II Tour, were see-through. So, she wore Nubian Skin products under the costumes.

And the story of how Beyoncé ended up wearing Nubian Skin during her shows is actually pretty funny, given how simplistic the process was. It was such a simple ask, Hassan thought she was being Punk'd.

"I got an email from one of her stylists," she says of her first Bey encounter. "It just came in through the regular info box saying, ‘Hi, I’m Beyoncé’s stylist. We want to work together on the Formation Tour. Would you be interested?’ And I thought it was a scam. I was literally like, whatever."

I mean, it's fair to think that Beyoncé's stylist wouldn't shoot an email requesting products to info@nubianskin.com. (I imagine her messages are delivered via secret packages with an NDA you have to sign before opening attached.) But it really was Queen Bey's stylist reaching out.

The process simply just consisted of Beyoncé's stylist putting in an order of bras and briefs for Queen Bey and her dancers in all of their proper sizes and colors, then they filled the order. Signed, sealed, delivered.

"We sent it over, and then images started coming through from the Formation Tour," she tells me. "Obviously, for that tour, they had a lot of lace stuff and see-through stuff. I remember just skimming a photo and I sent them an email saying like, ‘Is this what we think it is?’ And he was like, ‘Yeah, 100%.’ I was like, ‘Oh my god. Beyoncé’s in Nubian Skin.’"

Hassan says the most surprising part about selling underwear to Beyoncé — other than the fact that Beyoncé bought her underwear — was the Queen Bey's commitment to elevating black business owners and artists.

I want them to know that their skin tone is not a hindrance. It’s something to be celebrated, and it’s something that people and brands should be putting effort into.

"I think what surprised me the most — and actually, it’s now no longer surprising — but the fact that she’s a global superstar, right? She’s actually one of the most famous people in the world, but she made a point of championing black brands and championing black culture," she says. "I just find that to be incredible. She does it in very subtle ways and she does it in very overt ways, but I just think it’s something that she clearly takes to heart and sort of weaves into everything she does. And I think it’s amazing."

Beyoncé has been doing this for a long time. Throughout her solo tours, she has elevated women by employing an all-female band. For the 2018 Vogue feature she wrote herself, she commissioned photographer Tyler Mitchell to take the photos, making him the first black person to ever shoot a Vogue cover. For Homecoming, the film that was a product of her 2018 Coachella performance, she created an ode to historically black colleges and universities and filmed its production for the world to see.

The elevation of black culture and entrepreneurship is what Hassan admires most about Bey.

"She’s Beyoncé," she says, "Quite frankly, if she wanted to have everything custom made by whatever massive lingerie brand, she could probably snap her fingers and have that done, but she didn’t. And I think that’s just pretty amazing."

Hassan cites several moments throughout Beyoncé's career where she has highlighted black culture, the most recent being her and JAY-Z's shoutout to Meghan Markle during their Brit Awards acceptance speech. Beyoncé also wrote about the Duchess of Sussex on her website during Black History Month this past February.

Hassan said it herself: Beyoncé is famous enough that she could (to quote her own lyrics) "f*ck it up, then leave, come back, f*ck it up and leave again" whenever she wants. She doesn't have to do so much to elevate black culture in order to remain successful, but she does anyway. And for that, Hassan stans.

In the years since Nubian Skin was created, Hassan has had glamorous moments like receiving an MBE from Queen Elizabeth and Prince William at Buckingham Palace for her contributions to fashion. (An MBE is an award that celebrates contributions to the arts and sciences in the UK, as well as charitable work.) The not-so glamorous moments of her job are in the average, day-to-day occurrences like filling invoices and reviewing products with her three-person team and manufacturer.

She one day dreams of Nubian Skin having its own standalone store, as well as the products being available in stores on a global scale.

"I just want women to feel like this is right. Like this is me, this was made for me. Just comfortable in their own skin," she says.

"We get emails from people online, and they’re like, ‘You have no idea how much it means to have something in my skin tone,'" she adds, "and that’s what I want women to feel. I want them to know that their skin tone is not a hindrance. It’s something to be celebrated, and it’s something that people and brands should be putting effort into, because we deserve our nude just as much as everybody else does."

I think it's safe to say Beyoncé agrees.

More like this
Billy Porter Knows He's A Walking Piece Of Art. That's The Point — EXCLUSIVE
By Margaret Blatz
Mark Tuan's Quotes About His Solo Career Tease Endless Potential For The Future – EXCLUSIVE
By Michele Mendez
Millie Bobby Brown's Quotes About Growing Up In The Public Eye Are So Real
By Brandy Robidoux
Stay up to date