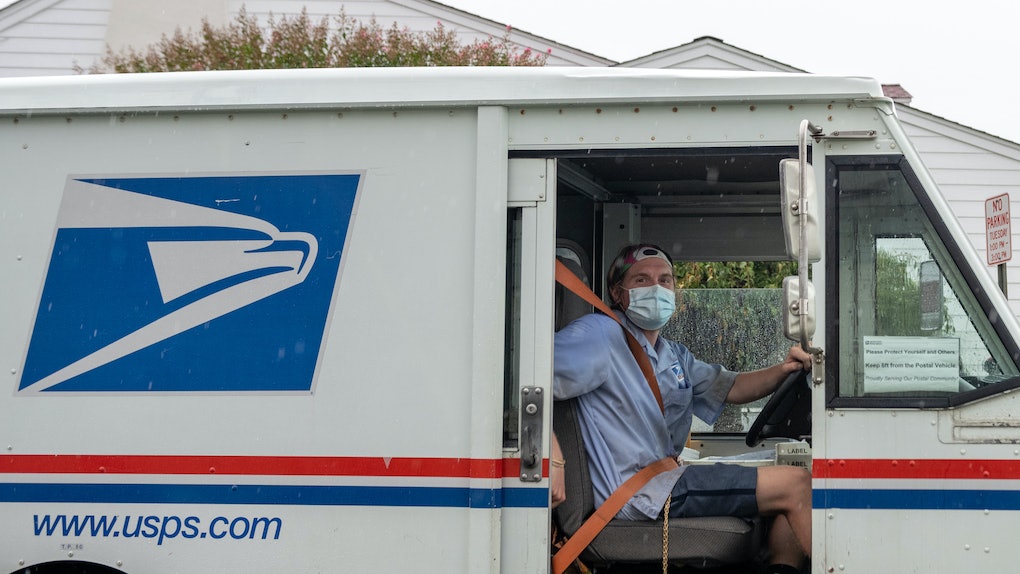 What's Happening With The USPS? Congress Will Vote On These Major Changes

With the 2020 presidential election just months away and a record number of Americans expected to vote by mail due to the ongoing coronavirus pandemic, the U.S. Postal Service is more important than ever. President Donald Trump has made no secret of his disdain for voting by mail, and that, coupled with recent changes to the USPS, have caused concern about whether the postal service will be fully equipped to handle the mail during the election this fall. Here's what you should know if you're wondering what's happening with the USPS, and what Congress is doing to address it.

The USPS had already been under financial strain for years, even before recent changes made to the system by new Postmaster General Louis DeJoy, who was appointed to the position by Trump in May 2020. Since assuming the position on June 15, DeJoy has implemented policies to reduce post office hours, cut overtime pay, and remove a number of letter collection boxes and letter-sorting machines, as well as a policy where mail-in ballots will no longer automatically be treated as priority mail. With growing pressure from lawmakers — and 20 states threatening to sue the federal government for potential mail delays — DeJoy announced on Tuesday, Aug. 18 that he’d be pausing some of his recent operational changes until after the election. House Speaker Nancy Pelosi said in a statement on Wednesday, Aug. 19 that the pause “is not a solution and is misleading.” Pelosi claimed DeJoy wouldn’t replace letter-sorting machines or mailboxes. In response to a request for comment, USPS referred Elite Daily to an Aug. 18 statement from DeJoy, in which he said post office hours wouldn’t change, mail processing facilities wouldn’t close, and “mail processing equipment and blue collection boxes will remain where they are.” DeJoy later said in an Aug. 21 congressional hearing that mail processors already taken offline would not be replaced.

“This pause only halts a limited number of the postmaster's changes, does not reverse damage already done, and alone is not enough to ensure voters will not be disenfranchised by the President this fall," Pelosi said in a tweet on Aug.18. Prior to the reversal, Speaker Pelosi issued a statement on Sunday, Aug. 16, saying these changes to USPS processing capacity could "[jeopardize] the integrity of the election," which is expected to have a higher than usual number of mail-in ballots in 2020, and urged the House of Representatives to come back into session to vote on a bill, The Delivering for America Act, which would prevent the Trump administration and the postmaster general from making changes to USPS' policies current as Jan. 1, 2020, until the COVID-19 pandemic has come to an end.

The Delivering for America Act, which was drafted by Rep. Carolyn Maloney (D-New York), seeks to reverse any changes made to the system, and it is still expected to come up for a vote on Saturday, Aug. 22, according to USA Today. On Friday, Aug. 21, Dejoy testified before the Senate Committee on Homeland Security and Governmental Affairs, and answered questions about the fiscal and operational workings of the USPS during the election and the pandemic, per NPR. He will also testify before the House Oversight Committee on Monday, Aug. 24.

On Monday, Aug. 17, Reps. Hakeem Jeffries (D-New York) and Ted Lieu (D-California) wrote a letter asking the FBI to investigate DeJoy for potential unlawful activity including "[hindering] the passage of mail." DeJoy, who has donated hundreds of thousands of dollars to Trump's campaign and holds almost $75 million in assets of post office competitors, is being accused by Jeffries and Lieu of his actions being "motivated by personal financial reasons." Elite Daily reached out to a representative for DeJoy for comment on the claims, but did not hear back at the time of publication.

Prior to the current issues, USPS cited concerns about potential delays during the presidential election on Aug. 3, telling voters they should request their ballots no later than 15 days before Nov. 3. The service advised requesting them as early as possible and checking your state's individual guidelines for a more accurate timeline.

The 2020 election is predicted to look quite different than years prior due to a greater emphasis on mail-in voting, and House Democrats previously proposed an additional $25 billion in USPS funding in their May coronavirus bill as well as $3.6 billion to fund additional election security. However, as of Thursday, Aug. 20, Congress has yet to come to an agreement on what will be in the second stimulus package.

On Thursday, Aug. 13, Trump sparked controversy when he admitted that while the USPS is not currently prepared to handle an influx of mail-in voting, he was not prepared to agree to giving the system emergency funding, and directly connected his disapproval with the election. "They need that money in order to have the post office work so it can take all of these millions and millions of ballots," Trump said during an interview on Fox Business. "If they don’t get those two items, that means you can’t have universal mail-in voting because they’re not equipped to have it." Critics have accused the president of attempting to undermine the USPS in order to impede access to voting, in the hopes that it will benefit him politically. Elite Daily reached out to the White House for comment on these criticisms, but did not hear back at the time of publication.

Trump appeared to show he was willing to agree to some additional USPS funding after all during a White House briefing on Aug. 13. However, he said he was not willing to reverse DeJoy's new policies, which critics have warned could lead to delays in counting votes. "I want the post office to run properly, which makes sense. They would need a lot more money if they’re going to be taking in tens of millions of ballots that just come out of the sky from nowhere," Trump said at the time.

After the House votes on the Delivering for America Act in the coming days, there should be a clearer picture of what the postal service, and in turn, mail-in voting, will look like ahead of the upcoming election.