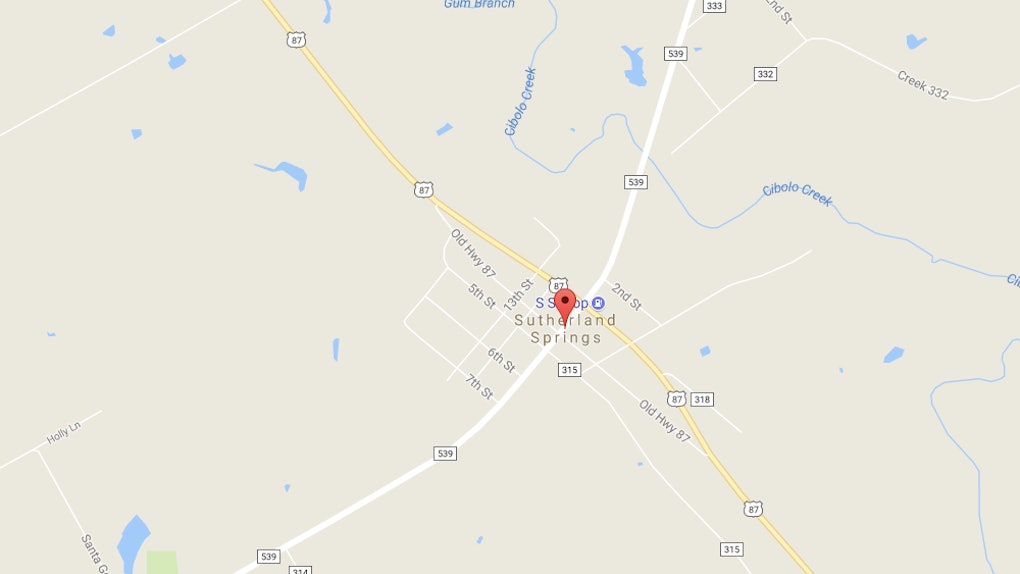 A shooting in South Texas is leaving a town in shock, after a gunman opened fire in a Baptist church on the morning of Sunday, Nov. 5. Multiple people are reported wounded or killed in the shooting in Sutherland Springs, Texas, according to NBC News. The news source reports that the situation is no longer active.

According to reports, a single shooter walked into the First Baptist Church in Sutherland Springs, a small town southeast of San Antonio, and opened fire around 11:30 a.m. local time. The shooter, who reportedly fled the scene and was pursued by deputies, is now reported to be deceased, though it's not clear whether the shooter died of a self-inflicted wound or was shot by authorities.

UPDATE: Authorities said that 26 people were killed in Sunday morning’s attack, and about 20 more were wounded, according to the Associated Press. Regional director of the Texas Department of Public Safety Freeman Martin said at a press conference that those killed ranged from 5 to 72 years old. He added that investigators weren't prepared to discuss possible motives for the shooting.

EARLIER: The number of casualties in the incident was not immediately clear. Wilson County Commissioner Albert Gamez Jr. told NBC News that up to 24 people may have died, though that number was not immediately confirmed. Wilson County Sheriff Joe Tackett later told the news outlet that "approximately 25 people" including the shooter, were dead after the incident. At least ten were injured. Several of the wounded are children, witnesses told CNN.

Among those killed was the 14-year-old daughter of the church's pastor, according to the Associated Press. The girl's mother told the AP via text message that she and her husband were out of town the day of the shooting and were trying to get back to Sutherland Springs.

A spokesperson for Connally Memorial Medical Center in Floresville, Texas, told the AP that "multiple" people with gunshot wounds were being treated at the hospital. Though the spokesperson declined to give a specific count, she said that the number of patients was less than one dozen.

The federal Bureau of Alcohol, Tobacco, Firearms (ATF) also told the news agency via a spokesperson that the ATF was sending special agents to the site of the shooting.

Sheriff Tackett told NBC News that there was no information regarding a possible motive into the shooting. Texas Rep. Vicente Gonzalez also told MSNBC that the shooter was apparently "not from the area," and that the incident apparently had to do with the church and the local community. He said that from what he understood, he did not believe the incident to be an act of terrorism.

On social media, leaders and politicians expressed their shock and dismay at the incident.

Texas Gov. Greg Abbott thanked law enforcement and called the shooting an "evil act" in a tweet. "Our prayers are with all who were harmed by this evil act," he wrote. Texas Sen. Ted Cruz shared his prayers as well.

President Donald Trump, who is currently in Japan as the first stage of his 12-day trip to Asia, also tweeted out his condolences. "May God be w/ the people of Sutherland Springs, Texas," he wrote. "The FBI & law enforcement are on the scene." He added that he was monitoring the situation from Japan.

Sunderland Springs is an unincorporated community of only a few hundred people about 30 miles outside San Antonio, according to The New York Times. The 2000 census listed the town's population at only 362, making the initial death toll about 7 percent of the total population.

Gamez, speaking to CNN, described the town as a close-knit community. "My heart is broken," he said. "We never think where it can happen, and it does happen. It doesn't matter where you're at. In a small community, real quiet and everything, and look at this, what can happen."

At around 25, the preliminary death toll in Sutherland Springs would likely put the incident among the deadliest mass shootings in U.S. history, one of which happened barely a month previously. The Sutherland Springs incident comes on the heels of the deadliest mass shooting in modern U.S. history, when a gunman killed 58 people at a country music concert in Las Vegas, Nevada on Oct. 1. The incident also comes only six weeks after another mass shooting at a church, when a gunman in Tennessee killed one person and injured eight others on Sept. 24.