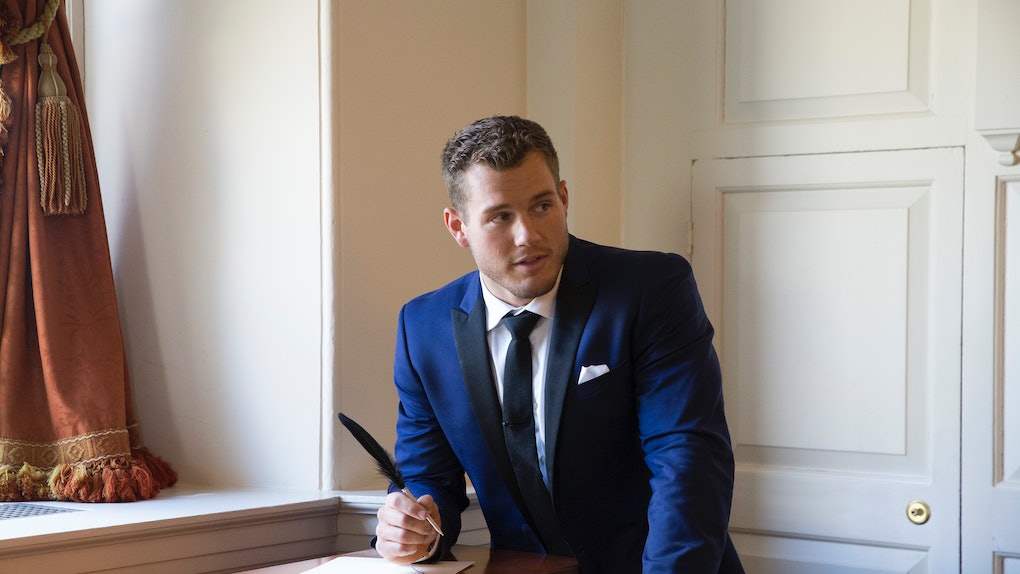 Regardless of what you think about Colton Underwood's pre-Bachelorette dalliance with Bachelor contestant Tia Booth, the 26-year-old's heartwarming hometown visit on The Bachelorette proved that he is a well-meaning man behind his obvious preference for brunettes in the spotlight. Colton won fans' affection even more when he took Becca Kufrin to a local children's hospital on his hometown date, but the visit actually had to do with his job. There's plenty that Bachelor Nation still wants to know about this former NFL player, including the big question his hometown date left us with: What's Colton Underwood's job?

Given that so much of his storyline was dominated by his short-lived relationship / weekend / whatever with Tia, Colton's impressive intro package at the start of the season that touched upon the non-profit organization he started to support people living with cystic fibrosis fell into the background. A quick Google search assures that the non-profit is still alive and thriving, but we'll talk more about that soon. Before he hits the beach on Bachelor in Paradise later this summer, Colton will definitely be the subject of many more online searches, so consider this your rundown of important facts to know about Colton before he pops up on our TVs again.

1. His Non-Profit Is Actually Very Successful

As he discussed in his Bachelorette intro package, injuries brought an end to Colton's NFL career, inspiring the start of his non-profit. The Colton Underwood Legacy Foundation also began because of Colton's younger cousin Harper has cystic fibrosis, and since it launched three years ago, the organization has given nearly "$100,000 in cash and equipment donations" to CF patients. The group also partnered with International Biophysics to provide patients with AffloVests, which helps clears airwaves and mobilizes secretions for those with respiratory diseases.

On Aug. 12, in Dayton, Ohio, the organization is also hosting a Legacy Bicycle and Bootcamp event, which — surprise! — will also feature a bootcamp led by fitness trainer and Bachelorette Season 14 alum Connor. I guess you know your foundation is legitimate when not one, but two Bachelorette contestants make their mark on it.

2. He Was Named After The Indianapolis Colts

I know, I know, the majority of Bachelor Nation probably clicked away from the Bachelorette cast bios when they realized that the traditional so-bad-they're-good surveys had been tossed. But if you check out Colton's bio, you'll have read that his unique name came from the Colts football team. He was even born on Super Bowl Sunday in 1992 (and the Colts weren't playing, BTW). The football coincidences at birth seemed to peg his life's outcome from the start.

Although his hometown date on the show was in Colorado, Colton was born in Indiana and went to high school in Illinois, which are the prime locations for true Colts fans. Colton grew up to play four years of college football at Illinois State and was later signed as a free agent for the San Diego Chargers. Without ever playing an official game in the NFL, Colton was a tight end for the Oakland Raiders when he launched his foundation and ultimately left his football career.

3. That Relationship He Referred To On 'The Bachelorette' Was Probably With Aly Raisman

He hasn't confirmed that the one serious prior relationship he discussed with Becca was with the former Olympic gymnast, but the details Colton spilled on the show align with his public relationship with Aly. He first made headlines in August 2016 when he asked out Aly, fresh from a victorious stint at the Rio Olympics, via a video message. The couple reportedly dated until June 2017, when Colton announced to the Peoria Journal Star that they were "taking a break right now."

The split seemed to be amicable, but following Colton's hometown date, the relationship was brought up again when Twitter fans tracked down photos of Aly with Colton's family from when they dated. So much for his claim that he never took a girl home "in a formal setting" before Becca.

4. He Once Owned A Sports Bar In His Illinois Hometown

In 2016, Colton opened 4th & Goal Grill in Washington, Illinois. According to the Peoria Journal Star, Colton remodeled the bar's interior alongside his dad Scott and wanted to work in the restaurant industry because of its similarities to sports in that both worlds are a "fast-paced environment." If you skim through the 4th Goal & Grill geotag on Instagram, there are plenty of photos of customers with Colton, then just famous for his NFL involvement, and one user even snagged a photo of themselves with Colton and Raisman.

However, Colton apparently came home from filming The Bachelorette and celebrated by selling the sports bar in April 2018. What with Colton's commitments to his non-profit foundation, he reportedly found himself unable to return to Illinois enough to run the restaurant, so his aunt and uncle now own the place, which goes by Brickhouse BBQ.

We caught a glimpse of Colton's dog in his intro package at the start of the season, but because everyone loves dog pics, treat yourself to this slideshow of photos of Colton and Sniper. Are we sure that Colton can't smuggle Snipper into his suitcase for his stint on Paradise?

His romance with Tia may bring us even more drama later this summer on Bachelor in Paradise, but after reminding myself that Colton is a good guy, I don't mind the thought seeing more of him soon. The Bachelorette returns on Monday, July 23, at 8 p.m. ET on ABC. Bachelor of Paradise premieres on Tuesday, Aug. 7, at 9 p.m. ET.