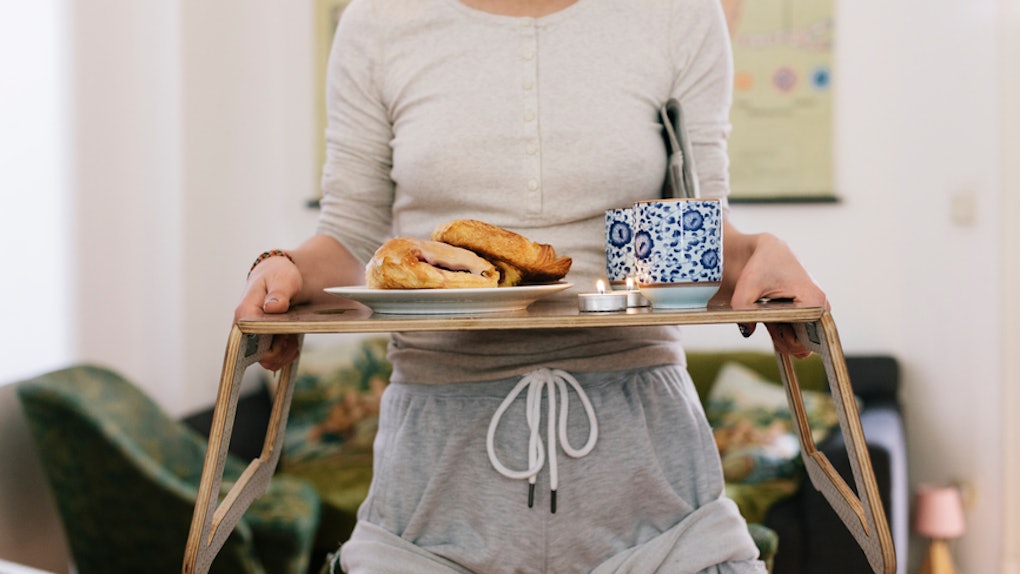 What Your Morning Routine Reveals About Your Personality & Your Little Quirks

Everyone has their own special morning routine. It might involve pressing snooze 10 times so that your routine turns into a mad dash against the clock, or it might mean making extra time to sip a cup of coffee and get yourself ready for the day. Either way, as creatures of habit, people tend to settle into their ways pretty quickly once they find what they like. You might not know what your morning routine reveals about your personality, but you can probably list the five or 10 things you do every single morning, without fail — and you may not have even realized until literally right now that you do these exact same things, at more or less the exact same time, day in and day out.

Of course, there are some things you do in a typical morning routine that are just plain basic hygiene. Other morning habits, though, might function more as a way to move you toward the next part of your day, while others may honestly serve no useful purpose at all, besides existing as a comforting habit.

If you have a Type A personality, then it's likely that a lot of your habits are based off of functionality and efficiency. And if you're Type B, then you might lean toward a more relaxed style of getting ready for your day. But the more attention you give to why you're doing the things you're doing, the more you'll be able to cut the habits that aren't helping you out, and focus on creating new habits that help you become the best possible version of yourself.

Here are eight ways your morning routine might reflect your personality.

If You Press Snooze

If you press snooze most mornings when your alarm goes off, then you're probably not a big believer in the whole "early bird gets the worm" theory. You like to be warm and snuggly, and you might think it's worth it to spend a few (aka 40) minutes in bed gearing up for your day. You're the type of person who likes to enjoy the little things in life — except, this probably isn't going to help you do that.

According to AmeriSleep, pressing snooze might just make you feel more groggy and less rested than if you'd just gotten up at the sound of the initial alarm. Quit the snoozing, and you'll see how much easier it is to embrace the little things in life along the way.

If You Wake Up Before Your Alarm

If you wake up before your alarm goes off every day, then I'm willing to bet you're a really productive person when it comes to getting things done. Waking up 10 minutes before your alarm every day probably has something to do with the great sleep you're getting, and the proper timing of your REM cycle, so keep going to sleep at the time you do, girl.

Waking up before your alarm is the definition of an early bird grabbing some kind of worm. You might even be the type of person who doesn't even need coffee to get your morning started, in which case, please teach me your ways.

If You Don't Have An Alarm At All

If you don't have an alarm at all, then you're not a person at all; you're a damn superhero. Having such a finely tuned circadian rhythm that you can go to sleep peacefully, knowing you'll always wake up at the right moment, is just not something that mere mortals can pull off.

If You Plan Your Outfits Ahead Of Time

Do you always plan ahead on what you're going to wear the next day? If you always have an outfit waiting for you in the morning, then you're the type of person with long-term vision. You think not just in terms of the present, but also for the future, which is definitely a good omen for your professional life.

Being a planner and staying organized is an amazing quality, but don't be afraid to let loose sometimes, too. Throw an outfit on every once in a while that you wouldn't normally wear — as long as it's appropriate for work, of course.

Throwing an outfit together at the last minute each morning isn't just causing you unnecessary amounts of stress; it also might mean you tend to be a bit short-sighted when it comes to planning. Mind you, that's not necessarily a bad thing. You're spontaneous, and you don't sweat the little things in life.

With that said, it might give you more time in the mornings to have an idea of what you're going to wear before you go to bed. At the very least, you should check the weather, so that you're not wearing sandals on the first snowy day of the year.

If You Fit A Workout In

There are two kinds of people in this world: those who workout at the crack of dawn (before they've even had their coffee), and the rest of us.

If you fit a whole workout routine in before you go to work or school every day, then you are the type of person I aspire to be. You're focused and goal-driven, and you're probably a pretty happy human, since you're starting off the day with a big boost of endorphins. Rock on with your morning workouts, girl.

If You Forget To Eat Breakfast

If you forget to eat breakfast pretty much every single day, then you're probably someone who's overwhelmed AF most of the time. You consider multitasking to be a serious skill worthy of being listed on your LinkedIn. You're proud of your ability to manage so much on such a tight schedule, but TBH, you need some breakfast, my friend.

Look, it's not the end of the world to skip breakfast sometimes, but even just a quick banana or cup of yogurt you can take on the go is better than nothing at all. And no, it won't mean that you're no longer the multitasking queen.

If You're Always Late For Work

If you're constantly late for work, no matter how much you try to rearrange your schedule, then you're probably the slightly frazzled type, and maybe just a touch artistic. I personally always get offended when people group the artists with the perpetually stressed or non-punctual humans, but honestly, it's true, and I'm done lying about it.

If you've tried everything to be more punctual, and nothing seems to work, try working backward: Go to sleep earlier, so that you can wake up at an earlier time feel more well-rested, and have more time to get your life together before you hop out the door. It's worth a try, and your boss will likely thank you for it.