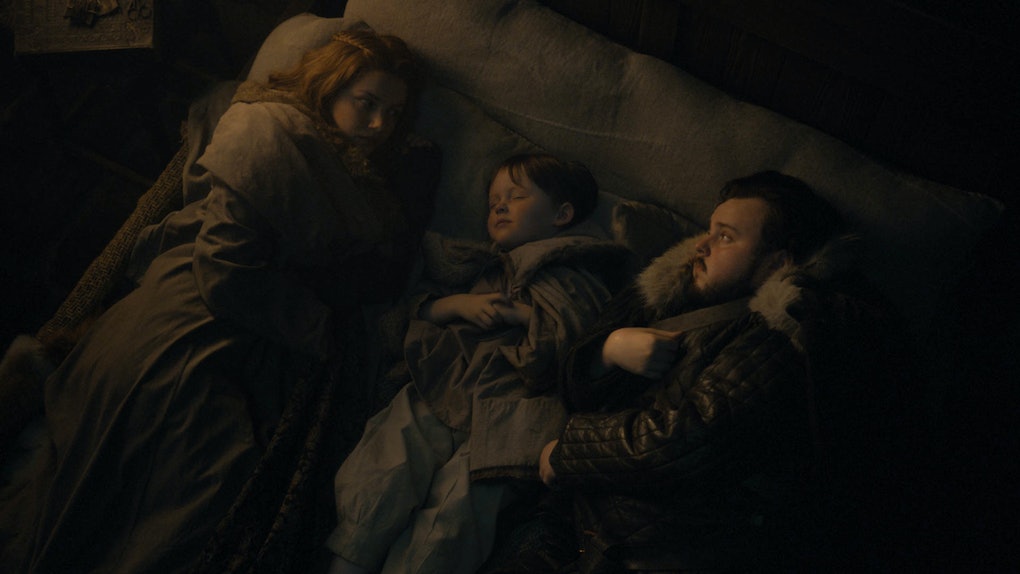 Game of Thrones used to spend much of the episodes referencing the A Song of Ice & Fire books, but over the seasons, that's changed. Where Season 1 was almost freakishly faithful to the source material, Season 7, well, couldn't be because there are no books to be loyal to. And yet, in small places, the show still manages to pull some of the stuff from the original novels into the show, including the songs. What song does Pod sing on Game of Thrones in the build up toward the battle with the White Walkers? It's called "Jenny's Song." Warning: Spoilers for Game of Thrones Season 8, Episode 2 follow.

This is the second song in two seasons the show has pulled out from pieces of the novel the show left behind. Last season, Ed Sheeran's cameo featured a song from Book 3, A Storm of Swords, which was sung by Symon Silver Tongue about Tyrion and Shae's secret relationship. The show initially cut both the Silver Tongue character and the song, but Season 7 found a way to work the song back into the series.

This season, instead of bringing in a rockstar, the show gave the song to Pod, of all people. However, it turns out actor Daniel Portman is actually an excellent singer, and his rendition of "Jenny's Song" was a heartrending moment as those around Winterfell get ready for the coming battle.

The song is also pulled from the A Storm of Swords book, but not from King's Landing. Instead, it's a song Arya hears while traveling with the Brotherhood Without Banners. Sung by Tom of Sevenstreams, another character cut from the show, it's a song Arya feels like she might have heard before, and one Sansa would almost certainly know.

At one point, the lyrics go:

High in the halls of the kings who are gone, Jenny would dance with her ghosts...

For non-book readers, Jenny of Oldstones, who the song is about, is an important historical character. She was the woods witch who married Duncan Targaryen, older brother to the Mad King, who gave up his place in line to marry her. She claimed to be a direct descendant of the First Men, and it was she who first spoke the prophecy of "The Prince That Was Promised," who would be born of the line of Prince Aerys and his sister Rhaella, told to their father, Jaehaerys II Targaryen.

Without her prophecy, Aerys, who later became Aerys II Targaryen, the Mad King, would not have married Rhaella, and neither Rhaegar nor Daenerys Targaryen would have been born.

Resurrecting this song at this moment is not an accident of timing, nor is it a coincidence that Pod's voice fades away as Daenerys descends into the crypts to find Jon, who has spent the entire episode avoiding her. Viewers now have two options of who might be this "Prince That Was Promised" as spoken by Jenny of Oldstones: either Daenerys, the direct descendant of Aerys and Rhaella's marriage, or Aegon Targaryen, the son of Rhaegar.

So, which one is it? Or, perhaps it's better to ask: Could it be both? Too bad Jenny of Oldstones isn't here to answer that question. Maybe the answer is, whoever survives the Night King's attack.

More like this
This 2021 'Game Of Thrones' Season 8 Trailer Is So Confusing... & So Good
By Ani Bundel
The 'Glee' Cast's Tribute To Naya Rivera At The 2021 GLAAD Media Awards Was So Moving
By Abby Monteil
Who Is Daniel Tiger On 'This Is Us'? Randall's Visit To 'Mister Rogers' Was A Big Deal
By Ani Bundel
Stay up to date