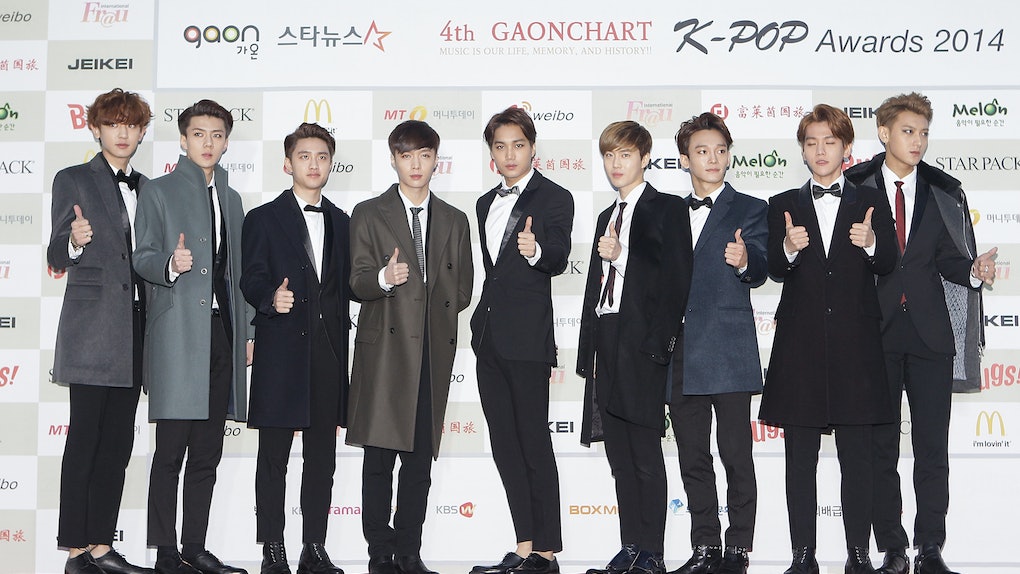 What Song Did EXO Perform At The 2018 Olympics Closing Ceremony? It's All About "Power"

The closing ceremony at the 2018 PyeongChang Olympics has done a lot of things: honored great athletes, brought countries together, and put on an overall incredible display of lights and graphics. However, it also brought a few amazing bops into the lives of viewers. Tons of great artists took the stage, including K-pop sensation EXO, who performed a song that's still stuck in my head. What song did EXO perform at the Olympics closing ceremony? The band was all about the "power."

EXO was already a much-anticipated performance for the closing ceremony. Being one of the biggest boy bands in all of Asia and having five studio albums released which sold millions around the world, it's safe to say the group has an unbelievable fan base. The nine-member boy band sings and dances to mostly R&B and electronic dance pop tunes, but have been known to change it up with other genres, such as Reggae.

They stuck to their roots with the performance of their hit track "Power." The song off their album, The Power Of Music, is an EDM jam that you'll want to add to your Spotify playlist ASAP. It's a real bop.

The lyrics to "Power" translated to English by Genius Lyrics are all about taking action for the future and using your own (you guessed it) power. The beginning of the song reads,

Don’t hesitate, move on/There’s no time/Your future depends on your imagination/Throw away your fear, we can do it, it’s okay/All the keys are in your possession

The chorus continues with the catchiest lyrics of all time.

Power power/Turn the music up now

The last two verses keep up the same energy as the beginning.

Don’t worry anymore, stop/Time is ticking, even now, tik tok/We take a shot/Let’s go, we got bang bang pow wow/With the melody that comes out of your earphones/Shut out all the noise and turn the volume up high/We got that power every time

The bridge at the end of the song is the final reminder that all our "power" comes from within, and it's inspiring AF.

When tiring days come, remember babe/The beautiful us/The power to get up again/It’s in you/We got that

Their performance at the closing ceremony was incredible. The band danced in white suits on a raised stage in the middle of the arena surrounded by back-up dancers dressed in chic black suits.

As it turns out, EXO loves the Olympics as much as the Olympics loves EXO. Before their performance, member of the group Suho gushed to NBC about what an honor it is to perform at the closing ceremony. He said in an interview before the show,

It is quite overwhelming and unbelievable. We have seen other countries holding closing and opening ceremonies for the Olympic games before, so the fact that we are performing at the closing ceremony itself is very honorable and it is really great. I'm feeling a variety of emotions and I might even cry after the show. It is an honor for the entire family and the entire group.

Their performance was unforgettable, but EXO is just getting started. I have a feeling 2018 will bring even more success for the boy band.

More like this
These Singers Were Accused Of Copying Other Artists In Their Music Videos
By Brandy Robidoux
Britney Spears Fans' Tweets Reclaiming Justin Timberlake's May Meme Offer Alternatives
By Cianna Garrison
Is Olivia Rodrigo's "Good 4 U" About Joshua Bassett? Fans Are Convinced
By Michele Mendez
Stay up to date