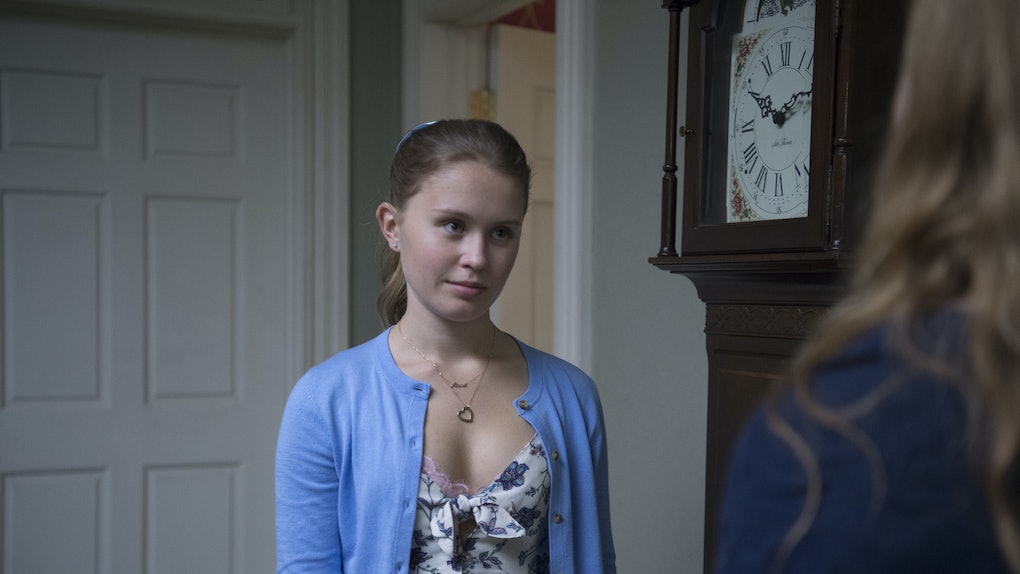 What Pill Did Amma Take On 'Sharp Objects'? Episode 5 Shows Her Wild Side

Since Camille arrived home to Wind Gap in Sharp Objects, she's been kept on her toes by her new half-sister. Amma is Camille's second half-sister, the first, Marian, passed away when they were teens. She was born when Camille was nearly out of high school. Now she's 13 and the biggest handful this side of the Mississippi River. It seems like every time Camille turns around Amma's done something else rebellious, like running away or drugs. In Episode 5, Amma pops a drug during Calhoun day, but what pill did Amma take on Sharp Objects? Warning: Spoilers For Sharp Objects follow. This post only discusses the happenings in the TV series so far.

Listen, that wasn't a pill, it's pretty clear that Amma takes a tab of acid. Perhaps the show means it to be MDMA or some sort of other newfangled things the kids take these days. But to my eyes, that looked like LSD the girl dropped on her tongue.

The time gap between popping the tab and the effects kicking in also suggests Amma took Lysergic acid diethylamide. And of course, like all bad trips, it kicked in during the worst possible moment, when she was up on stage in the middle of performing her role as Millie Calhoun, tied to a tree, being faux gang-raped and burned alive by guys her own age playing Unionists.

But the trip seemed only to strengthen her resolve to play the character to the hilt. One might even argue Amma's somewhat wooden performance suddenly took on a marked improvement. But it didn't last, because the fight that had been brewing all day in the background broke out in the back of the audience.

Bob Nash, who felt persecuted and put upon after Camille's story broke, attacked John Keene, the teenager he genuinely believes killed his daughter. The sudden spate of violence seemed to trigger something in Amma's memory, and the trip amplified it to the point of panic. She raced from the stage and disappeared.

Amma's runaway act in broad daylight triggered Adora into a complete bout of hysterics. Exactly what she's worried about isn't clear. If Keene or Nash were the killers, Amma is safe, as both of them are currently in jail.

Adora's over-the-top response drove the men still in attendance to head out in a search party. Camille goes with them, her intuition telling her something about her sister isn't right. Maybe she's run off to the shed where she, Natalie, and Ann used to play.

Camille rewarded with finding her sister, scratched, torn, bloodied, and in a terrible state. But the girl is safe, at least physically. As to what set her off, Adora's not asking, and Camille will have to wait until her sister wakes up to find out.

More like this
This 'The Handmaid’s Tale' Season 4, Episode 5 Promo Shows June In Chicago
By Ani Bundel
TikTok's #NotTheMainCharacter Trend Shows The Supporting Role You Connect With Most
By Marisa Casciano
11 Moments From 'Ramy's Ramadan Episode That Are Way Too Relatable
By Umber Bhatti
Stay up to date