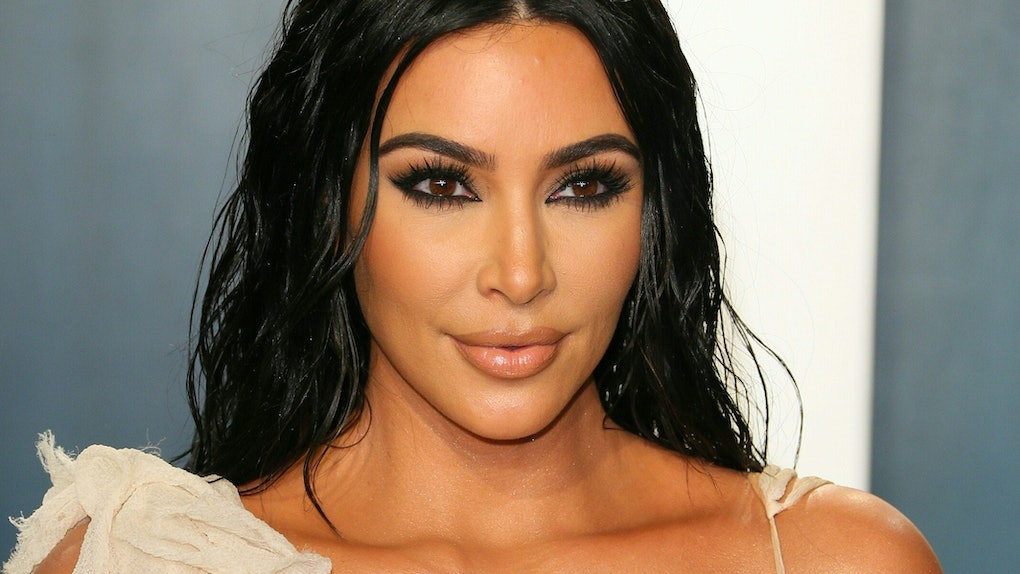 What Kim Kardashian Looked Like At The Beginning Of 'KUWTK' Vs. Now Is So Different

Few style evolutions have been as transformative as Kim Kardashian's. Since appearing on the very first episode of Keeping Up With The Kardashians in 2007, the reality star has progressed from having a closet full of bodycon dresses (#relatable) to becoming a bonafide style icon. When it comes to notable accomplishments in the fashion world, Kardashian has ticked nearly every box. She's now a regular at the Met Gala, fashion's biggest event of the year, and has graced the cover of Vogue numerous times. Not to mention she's developed and launched collaborations with fashion's most respected designers. If you're a day-one fan of her show, you know what Kim Kardashian looked like at the beginning of KUWTK vs. now is drastically different.

Whether she's enjoying a casual night out or hitting a red carpet, it's not unusual to see Kardashian dressed in the latest haute couture look, sometimes before it even hits the runway. The start of her style overhaul can be traced back to when she linked up with Kanye West. In the earliest episodes of Keeping Up With The Kardashians, West was seen overhauling the contents of her closet. For Kardashian, the wardrobe edit wound up being pretty emotional.

"When we first started dating, he went through my closet and he had a stylist come in and they put everything he thought wasn't cool enough in a pile," she recalled on Live! With Kelly and Michael in October 2015. "I walked in and it was like a pile to the ceiling of shoes, all my amazing shoes that I loved. I started crying." In time, Kardashian embraced her major style upgrade. "I hadn't even heard of some of these designers before, and it really helped me fall in love with fashion," she admitted.

But it's always fun to take a walk down memory lane, right? Here's what Kim K looked like at the beginning of KUWTK versus now when it comes to style, beauty, and her overall transformation.

Here Kardashian is arriving to the Rock & Republic Spring Collection Party in October 2006 in Hollywood. The snapshot was taken just one year before KUWTK premiered in October 2007, and was indicative of her style at the time. Kardashian was known for her oversized, statement pieces (which sometimes erred on the side of gaudy).

2007 Kardashian's style is a far cry from the clean, minimalist style fans have come to expect from her now in 2020. Kardashian's life is a parade of ultra-chic outfits. Here she is rocking a latex bodysuit as she attends Kanye West’s church service during Paris Fashion Week in March.

As you can see, it's been quite the journey.

In addition to making changes to her fashion, Kardashian also switched up her makeup over time. During her earliest days in the spotlight, Kardashian wore much bolder makeup, often incorporating colored eyeshadows.

Today, it's a different story. Kimmie is known for her minimalist nude lip and neutral smokey eye. Overall, she keeps things pretty minimal.

Here she is in 2007 rocking lavender eyeshadow and shiny lip gloss:

Here she is at the 2020 Oscars. While her makeup is arguably heavier, it's all semi-matte or matte in neutral tones.

Even on her show, Kardashian looks unbelievably different from 2007 to present day.

Although some fans swear she's had cosmetic surgery, Kardashian has denied the rumors and insists her face is au naturale aside from a few Botox fillers. Most of Kardashian's perceived bone structure changes can probably be chocked up to her aging naturally. Plus, she's a contour queen. It's amazing what a little highlighting and contouring can do, so Kardashian's sculpted cheekbones can probably be attributed to her glam squad.

If Kardashian's transformation though the years comes as a surprise to fans, they're not alone. Even she has cracked jokes about her unlikely rise to fashion icon status. “I’m shocked that I’m winning a fashion award when I’m naked most of the time,” she told the crowd at the June 2018 Council of Fashion Designers of America Awards.

More like this
Where Is The 2021 Oscars Ceremony Being Filmed? The Location Is So Different
By Umber Bhatti
Kanye West's New Netflix Docuseries Sounds Epic, But Will It Feature Kim Kardashian?
By Brandy Robidoux
Queen Elizabeth's 95th Birthday Plans Will Be Different Following Prince Philip's Death
By Sydney N. Sweeney
Stay up to date