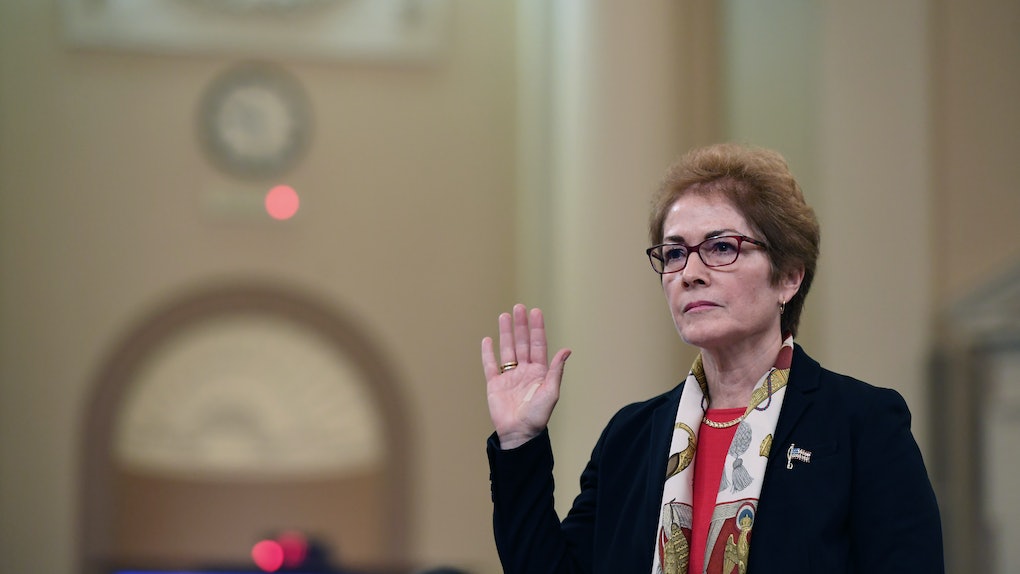 What Is Witness Tampering? It's A Serious Crime

The public impeachment hearings on Nov. 13 and Nov. 15 had some blockbuster moments, as public servants testified about President Donald Trump's involvement with Ukraine and domestic politics. Perhaps the biggest moment of all was when Trump's own real-time tweet about Ambassador Marie Yovanovitch was read in the hearing room. It had many people asking: what is witness tampering? It can have serious repercussions.

On Friday, Nov. 15, Yovanovitch, the former ambassador to Ukraine, testified publicly to the House Intelligence Committee as a part of the impeachment inquiry against President Donald Trump. Not long into the testimony, Trump took to Twitter and proceeded to attack Yovanovitch and her career. Trump wrote,

Everywhere Marie Yovanovitch went turned bad. She started off in Somalia, how did that go? Then fast forward to Ukraine, where the new Ukrainian President spoke unfavorably about her in my second phone call with him. it is a U.S. President’s absolute right to appoint ambassadors.

The Intelligence Committee Chairman Rep. Adam Schiff of California asked Yovanovitch if she'd like to respond to Trump's tweet about her, which she did. "I don't think I have such powers," Yovanovitch said, adding that in her opinion she and her colleagues had "demonstrably made things better" in their foreign posts.

Schiff also asked Yovanovitch whether she believed the president's words about her might impact other witnesses from coming forward to testify. She responded that although she was unaware of the president's motives, it was an "intimidating" situation to be faced with.

Following Yovanovitch's testimony, some people questioned whether Trump's Twitter tirade against the former ambassador qualified as witness tampering. Witness tampering is defined by the Department of Justice (DOJ) as "conduct intended to illegitimately affect the presentation of evidence in Federal proceedings or the communication of information to Federal law enforcement officers." It also applies to "proceedings before Congress, executive departments, and administrative agencies, and to civil and criminal judicial proceedings, including grand jury proceedings," per the DOJ website. So basically, if an individual is testifying under oath, but their testimony has been influenced by another individual, or an individual is attempting to influence a person's testimony, that might be perceived as witness tampering.

NBC News reported on Nov. 16 that Trump's tweets could be prosecuted as witness tampering, but they could also be defended as freedom of speech. Trump addressed the tweets himself on Nov. 15 by telling reporters that he was just offering his opinion on the matter and has the right to freedom of speech "just as other people do."

Witness tampering comes with its own set of repercussions. According to Legal Information Institute, a non-profit legal service of Cornell Law School, individuals who are found guilty of intimidating, threatening, harming, or attempting to influence a witness' testimony can face up to 30 years in prison. However, federal charges depend on the level of intimidation used against the witness. In cases of harassment which would delay an individual's testimony, the typical punishment is up to three years in prison. However, if a person physically harms or attempts to harm a witness, the punishment can be up to 30 years in prison. As of Nov. 18, Trump has not been formally accused of witness tampering.