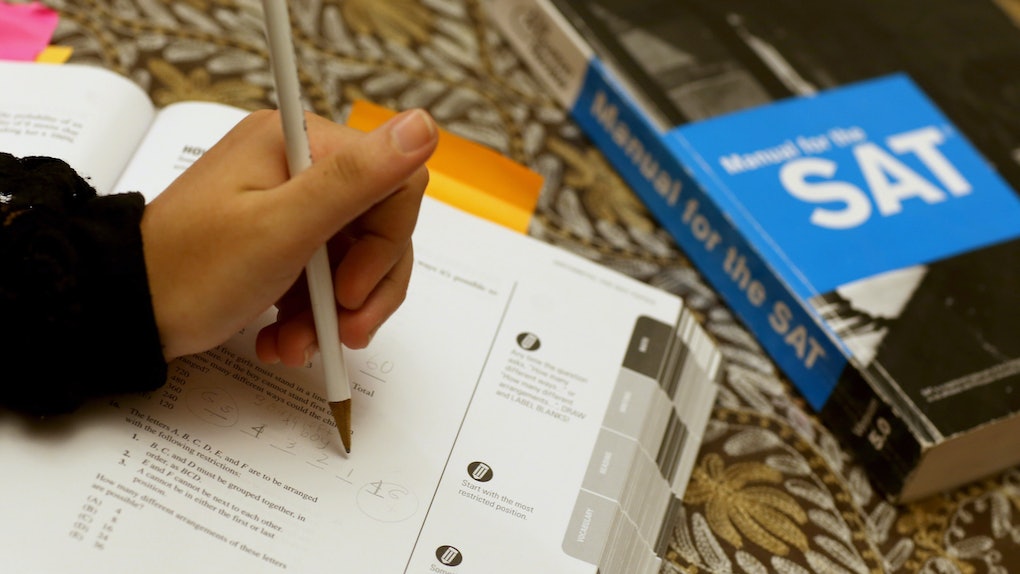 What Is The SAT's Adversity Score? It Tracks Students' Social & Economic Background

For many high school students, standardized tests can make or break college acceptances. However, one standardized test is introducing a new way to track students' applications. So, what is the SAT's adversity score? Here's what to know.

According to The Wall Street Journal, the College Board will begin using new SAT adversity scores to track applicants' social and economic background. The score will be calculated using 15 factors, including neighborhood environment, family environment, and high school environment. Neighborhood environments will be divided into sub categories tracking crime rate, poverty rate, housing values, and vacancy rate. Family environment will calculate the median income of the student's household, taking into account whether it's a single-family household, the level of the parents' education, and whether English is a second language. High school environment will take note of how difficult the school's curriculum is, their free-lunch rate, and the number of AP classes offered. Once those factors are calculated, the students will be ranked, with 50 being the "average," anything above 50 being "hardship," and anything below 50 being "privileged." These scores will appear alongside students' SAT results and will be available for colleges to see but not students.

According to the WSJ, the scores are expanding starting this fall, after 50 colleges and universities used the adversity score in a beta test in 2018. The test was such a success that 150 institutions will reportedly use it come this fall.

The SAT's adversity score follows wide-ranging criticism about the college admissions process, including suggestions that standardized test such as the SAT are biased in favor of affluent white students. According to CNN, the College Board has expressed concern about income inequality influencing students' SAT results, with white students scoring higher on standardized tests compared to African-American and Hispanic students in 2018. The change also follows the recent college admissions scandal, where a number of upper-class families allegedly cheated to help get children admitted to elite colleges and universities. Some of the 50-odd people allegedly involved in the scandal have since pleaded guilty, while others have maintained their innocence.

In a statement to the WSJ, David Coleman, chief executive of the College Board, acknowledged the criticisms around bias and emphasized that the change is meant to give students equal opportunities regardless of wealth. "There are number of amazing students who may have scored less (on the SAT) but have accomplished more," Coleman said. "We can't sit on our hands and ignore the disparities of wealth reflected in the SAT."

Wealth inequality has been a problem plaguing higher institutions for decades, but now, the issue is being brought into the spotlight. In January, The New York Times reported that 38 colleges in the United States, including five Ivy League institutions, enrolled more students from a top 1% income scale than the entire bottom 60%.

While the SAT's adversity score won't help with financial aid for college students, it could make a huge impact on getting students one step closer to those institution doors. College applications can be a stressful and strenuous process, but every student deserves an equal shot. Good luck on those tests, kids!

More like this
Here's How To Enter Hotels.com's Tax Write-Off Vacation Giveaway For A Chance At $2,700
By Lara Walsh
The 6 Best Organizer Wallets
By Scarlett James
These Unique Gifts For Moms Are A Change Of Pace From A Bouquet Of Flowers
By Cianna Garrison
Stay up to date