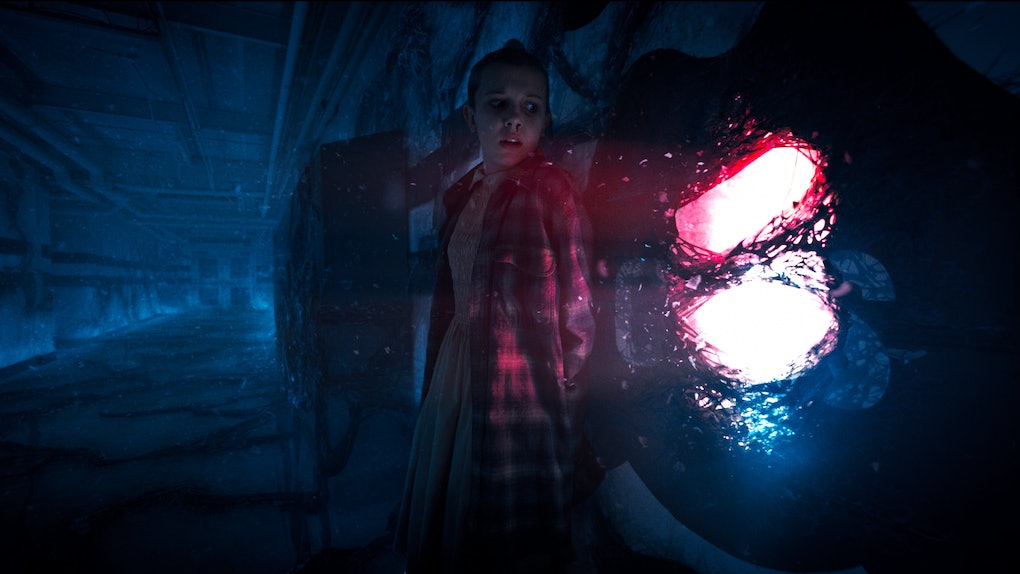 What Is Eleven's "Wound" On 'Stranger Things'? Here's Everything We Know About Her Darkest Problem

We've always known that Eleven was a damaged young person when she arrived in Hawkins, barely able to speak, completely ignorant about the world, and semi-feral. But it wasn't until She left Hawkins for Chicago, and met another of her sisters, Kali, that the language of what had been done to her began to enter her vocabulary. Kali spoke of a wound that the abduction by Hawkins Lab had torn inside them both, that they had to find their place in the world, before they can heal. But what is Eleven's "wound" on Stranger Things? Because while Kali is talking about an emotional wound, her sister Jane has a much larger, physical one she also has to deal with: the gateway she opened to the Upside Down. Please be advised: This post contains spoilers for Stranger Things Season 2.

We can see the disconnect between what Kali thinks Jane's problem is and the reality in that final scene in Episode 7, when the ghost of Dr. Brenner enters the room. To Kali, he's the real evil they have to confront – the one who they have to kill. Their vigilante justice is leading up to taking him out.

But Jane's just like, "what even?" because she (perhaps without consciously recognizing it at the time) has seen the truth about Brenner, and it's not that he is the face of evil. It's that he is a callous man, an insanely curious but ultimately ambitious man, and one who is, in the end, a fool for not recognizing what he should and should not mess with.

And he's also already dead. She didn't kill him. Kali won't get to kill him. He's dead from his own bad life choices.

But while Brenner may have made some bad life choices, that means that Jane, when she was Eleven, did too. She followed "Papa's" orders, even when every fiber in her being said to do so was a bad idea. She went back into that tank. She walked back up to that evil, monstrous creature that was so terrifying, so filled with evil and hate, and she tried to connect with it. In doing so, she broke open the rift between their two worlds and allowing the Upside Down in.

Kali wants Jane to heal the wounds that come from the sins committed against her. But those wounds are healing, on their own, and without any sort of need for vigilante justice.

Perhaps that's because Eleven was taken as a baby, and not as a primary school child? Perhaps that's because she escaped earlier, and did quite a bit of her own murdering of those who still worked in the lab today, instead of those who are retired and forgotten. But either way, her experiences with Mike and her friends in Season 1 began that process already. Her time with Hopper "the policeman" has also slowly shown her what family can be. And her meeting with Terry, her vision of being taken as a baby, and now her lessons with Kali have all done that work.

Eleven doesn't need to go on a killing spree with other freaks to sooth her troubled soul. It's already soothing... except for one thing: that opening to the Upside Down.

For Eleven, that's the last part of her time in the lab that she has to confront. It's what's festering in side her, and inside Hawkins, and no one she loves will ever be safe until she's atoned for opening it. She needs to heal that wound above all others, so that she can move on from that period of her life completely. She can then become Jane Hopper, and learn to live (some variation of) a normal life as she grows up.