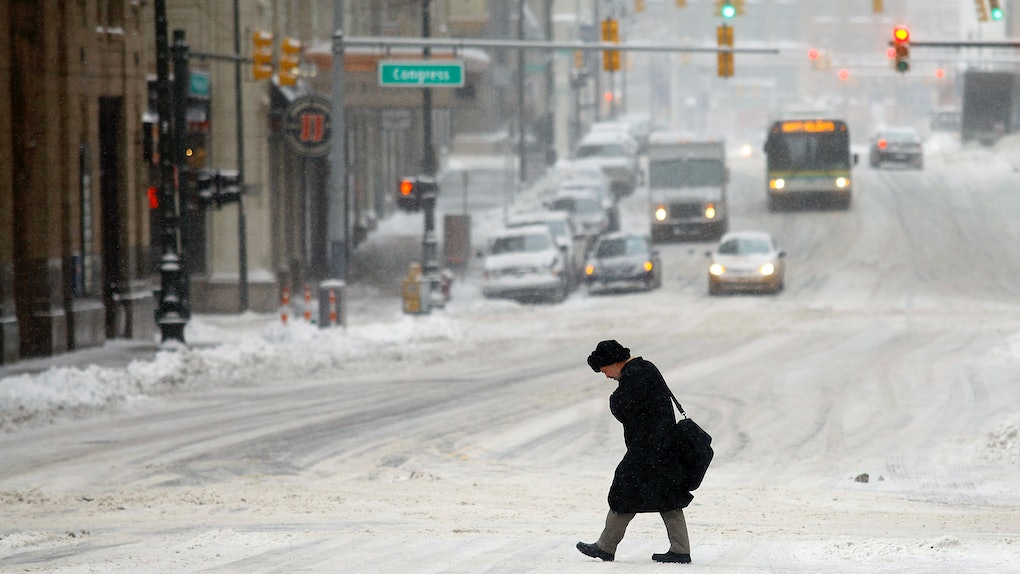 What Is A Polar Vortex? Bundle Up, Everyone

All the fun parts of winter are officially over, and the cruel bitter reality of that January chill is knocking on your door, and it's about to get worse. If you walked outside recently and thought "nope," you're not alone. There's a polar vortex sweeping across the U.S. and it's not pretty. I know you might be thinking, cool, but what is a polar vortex? Well, bundle up, because it's some seriously chilly business.

As of Wednesday, Jan. 30, the United States is being hit by some record-setting cold weather, with parts of the Midwest seeing some of the coldest temperatures they've faced in over two decades, according to the Weather Channel. As of the morning of Jan. 30, Chicago was already colder than Antartica, with temperatures at the city's O'Hare Airport at 23 degrees Fahrenheit below zero — the coldest it's been in 34 years, per the Weather Channel. Parts of the Great Lakes and Northern Planes could even hit temperatures of around 40 degrees below zero.

The nasty weather is the result of a polar vortex, which is a basically a burst of really, really cold air that usually stays trapped around the North Pole and Arctic regions. However, according to NASA, changes in the jet stream and bursts of warmer air aimed northward can disrupt the circular winds which usually keep the cold temperatures around the pole, allowing the vortex to slip and dip south, hitting regions with extreme winds and bitter cold.

And yes, it could be connected to climate change (possibly). The Guardian points out that there's evidence that the jet stream which interacts with that polar vortex and allows the cold to slip south may be getting slower or wavier thanks to climate change — which may make polar vortexes more common. Brr.

While the Midwest is currently feeling the brunt of cold weather as a result of the polar vortex, the Northeast will also start to see some colder-than-normal temperatures later in the week. So hunker down, everyone.

The Weather Channel warns that these winds can get so cold that they could cause frostbite as soon as coming in contact with exposed skin. CNN meteorologists Brandon Miller and Judson Jones advise people to stay indoors as much as they can, if you need to go out then make sure to break those layers out.

For some people staying indoors isn't much better or isn't even an option. For people in regions affected by the polar vortex who are in need of shelter, some cities have created warming centers. Lyft is even offering free rides for people to warming centers in Chicago. Of course homeless people in need of shelter probably don't have phones, but per the Chicago Tribune, app users can call a free ride for someone else. So if you see someone in need, you can help them out with free transport to some warmth.

In the wake of all the extreme chills spreading through the country, some people are hitting Twitter to share the extent of the cold weather and how they are trying to pass the time and stay warm.

But first, to get an understanding of just how cold it really is. Look at this person in Chicago who threw what appears to be water from his balcony into the cold air. It turned to ice immediately.

But that Twitter user isn't the only one feeling the cold. Twitter user Claire Scatter shared pictures of the inside of her windows. They're covered in ice. Again, the inside.

With temperatures outside being unbearable and people locked indoors, there are bound to be some memes.

It's no fun out there right now and dangerously cold, so if you have the option just stay inside and tweet. Anything's better than going outside, really.