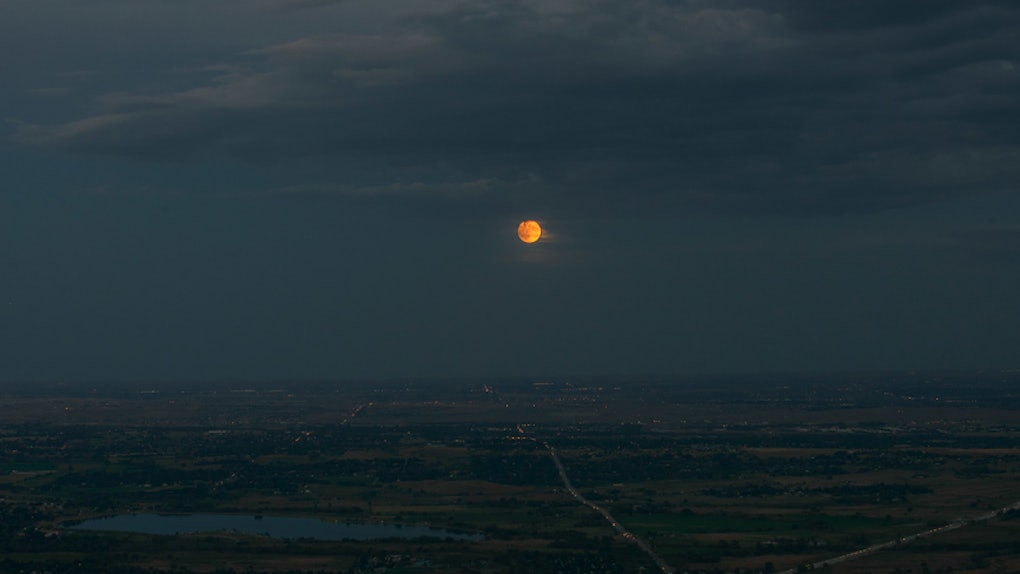 What Is A Blood Moon? 5 Things To Know About This Creepy, Crimson Lunar Event

A blood moon sounds so dangerous and mysterious, doesn't it? Well, we've got one coming to a sky near you (or, you know, the sky that we all see, I guess) on Jan. 31, so you might want to get ready for it and all it might entail. But what is a blood moon, you may ask? And what exactly makes it so crimson and bloody looking? Don't worry, I assure you it's not quite as apocalyptic as it sounds.

Basically, a blood moon is another way to refer to a total lunar eclipse. It isn't a scientific term, it's more just what we earthlings call it because of the reddish hue it often takes on. During a total lunar eclipse, the moon moves entirely behind the shadow of the Earth.

But there does happen to be something particularly special about the upcoming blood moon at the end of January. Not only will it be the second full moon within the month (an event called a blue moon), it'll also be a supermoon (which is when the moon is bigger and fuller because of its proximity to Earth) and a total lunar eclipse, all at the same time. The last time all three of these things happened at once was on March 31, 1866. So, yeah, it's been a while.

In order to gain a little more insight into this very rare and very cool lunar event, I consulted a lovely book about the moon I own by intuitive and author Diane Ahlquist called Moon Magic. So, without further ado, here's what you need to know about blood moons to prepare for the epic evening on Jan. 31.

1. The Moon Appears Blood Red Because Of Dust

Yes, according to Ahlquist's book Moon Magic, because of the way the Earth's atmosphere scatters light through dust particles, a total eclipse of the moon can often appear coppery or crimson-colored. When there are more dust particles in the atmosphere, the moon appears to take on a darker red hue.

According to the folks at NASA, during a total lunar eclipse, white sunlight that hits the atmosphere on the sides of the Earth is absorbed and then scattered. The atmosphere filters out most of the blue-colored light, and what's left is the orangey, red, brown-colored light. The light that comes through Earth's atmosphere then falls onto the moon.

Essentially, the light of the moon is seen through, or refracted through, the Earth's dirty, dusty shadow.

2. There Are A Ton Of Myths Out There About Blood Moons

Alqhuist cites a variety of ancient stories in her book that came about as a result of this most unusual lunar event. Apparently, ancient Mesopotamians thought that the moon was being attacked, and that their king was being attacked, too. So, they put in place a fake king while the blood moon was happening to trick whatever was attacking the moon, because that makes sense, right?

And as for the Incas? The South American civilization thought a jaguar was attacking the moon. And in Korea, they believed it was gigantic hounds. In Africa, they were sure it was a fight between the moon and the sun.

So, my friend, what do you think the blood moon really is?

3. It Represents A Great Time To Quit Your Bad Habits

Ahlquist and modern witches cite the blood moon, or any lunar eclipse, as a particularly potent time to quit a destructive habit you may have, or even addictions you're struggling with. So whether you're a smoker, or you've been considering taking a break from booze for a while, they say that the blood moon will give you that extra boost you need to combat your own inner darkness.

So, the moon spends most of its days either above or below the Earth's orbit. About two to four times each year, the moon passes through some portion of the Earth's shadows, and one of three types of eclipses occurs: a penumbral, a partial, or a total eclipse. A total lunar eclipse takes place about 35 percent of the time — and we'll see one on Jan. 31 — and there are about two lunar eclipses a year on average.

5. A Blood Moon Represents A Time Of Opportunity

Yes, not only is it a time to quit some of the bad stuff in your life, the blood moon can also present a great opportunity, energetically speaking, to rid yourself of whatever doesn't serve you.

Think of eclipses as a time of change and opportunity to eliminate chaos from your life.

She adds, though, that you shouldn't just procrastinate change and wait for an eclipse to come around. But if change has been on your mind recently, and you've been hesitant to take the first step for whatever reason, consider the blood moon on Jan. 31 to be your prime opportunity to make that sh*t happen.