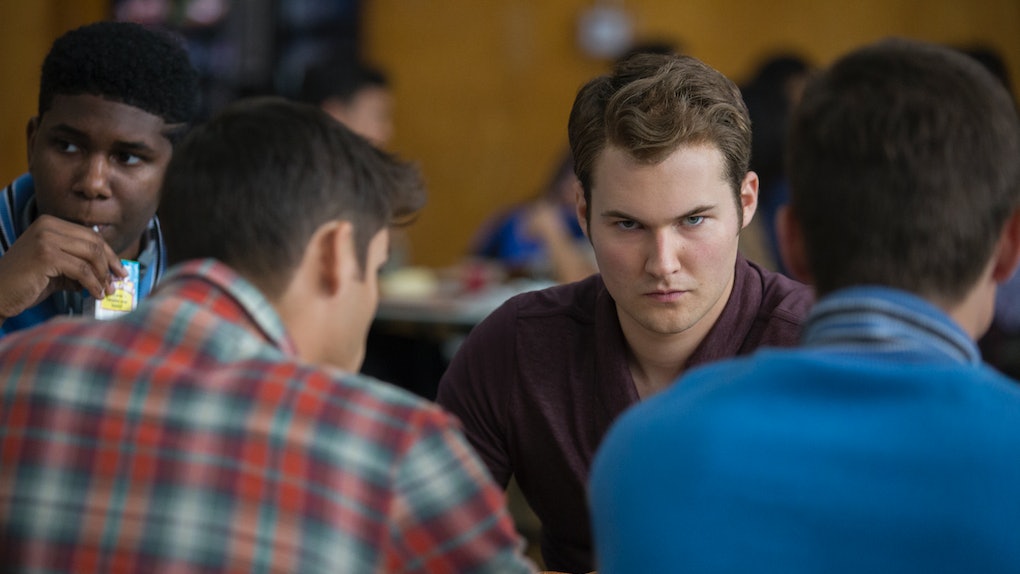 What Happened With Bryce In '13 Reasons Why' Season 2? Refresh Your Memory ASAP

Jocks are typically the invincible foes in high school dramas, but as the Season 3 trailer of 13 Reasons Why confirms, antagonist Bryce Walker does not get the last laugh. When new episodes pick up several months after Season 2's conclusion, Bryce's murder will be the central mystery, and accusations about who killed him will fly left and right. But before that whirlwind of new information begins, refresh your memory on what happened with Bryce in 13 Reasons Why Season 2, because there's a lot of ground to cover.

Following Hannah Baker's (Katherine Langford) death in Season 1, her friend Clay Jensen (Dylan Minnette) eventually managed to record Bryce (Justin Prentice) admitting he raped Hannah the night of his party. As depositions covering Hannah's death began, Clay handed in his new tape as well as Hannah's audio cassettes explaining how other people influenced her decision to kill herself. Unfortunately, Season 2 quickly established that nothing would become of the tapes, as they were considered conjecture and hearsay.

However, Bryce was still called to the stand in the Bakers' case against the school district, but he was confident the result would be in his favor. During the trial, Bryce claimed he and Hannah had been in an "on-and-off-again thing" and that he was ashamed of the nature of their relationship. Because he avoided the question of whether Hannah granted him sexual consent on the night of the rape, the jury initially believed he was innocent. However, after the school district was found innocent in Hannah's death, Bryce was arrested on the charge of sexual assault felony, leading to his own trial with Jessica (Alisha Boe), as Justin (Brandon Flynn) had testified about Bryce raping her.

At the end of this trial, Bryce was sentenced to only three months of probation, and despite protests from Clay's litigator mother (Amy Hargreaves), these terms stuck. Season 3 is slated to begin eight months after Season 2's ending, so if viewers do see him before his death, Bryce will have served his full probation. Has he changed his ways since then? Does he still show no remorse? Something about his behavior must spark someone to attack him, since the 13 Reasons Why Twitter account has already confirmed Bryce's death "was indeed a homicide."

The show's social media accounts have also hinted at other characters' potential reasoning for killing the football star. Jessica could have committed the crime for revenge, while Bryce's girlfriend Chloe (Anne Winters) and close friend Zach (Ross Butler) growing closer may contribute to them killing to hide a secret. As evident in Season 3's full trailer, some suspect Tyler (Devin Druid) because of his gun ownership, while other clues begin to point toward Clay as the murderer.

Another detail to consider before Season 3 launches is the absence of Bryce's father (Jake Weber) in the trailer. In Season 2, they were seen having a close relationship, but the Season 3 promo focuses on Bryce's mother (Brenda Strong) desperately trying to determine who killed him. Seeing as his dad had his back during his trials, do the circumstances of Bryce's death cause Mr. Walker to turn against his wife? In addition to explaining what happened to Bryce between seasons, fans could also expect a deeper dive into his family dynamics and how they changed over the course of his probation.

For now, it's safe to say viewers are just as intrigued as Mrs. Walker is about what happens to Bryce. Season 3 of 13 Reasons Why premieres on Friday, Aug. 23, on Netflix.