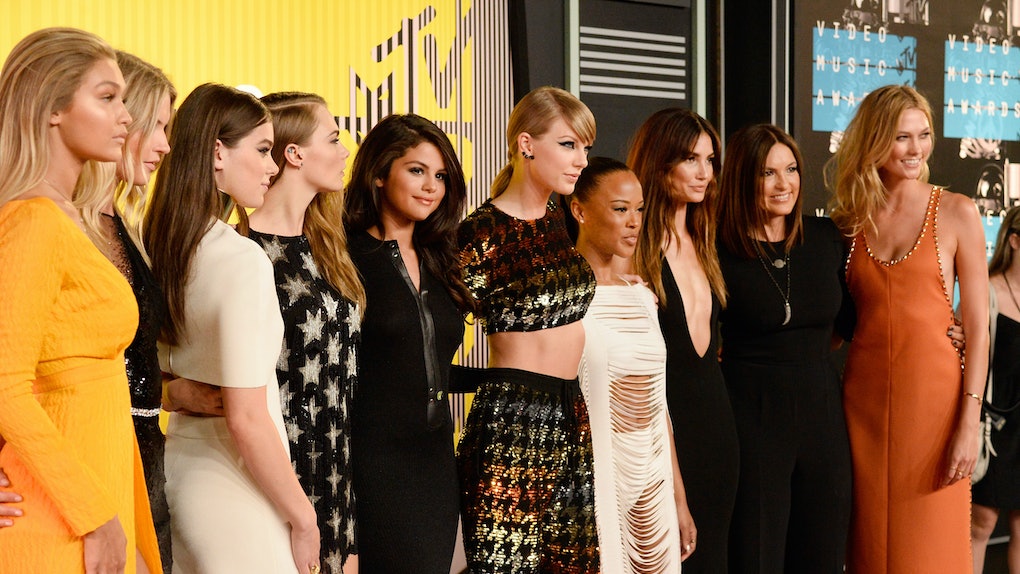 What Happened To Taylor Swift's Girl Squad? She Hinted That Her Insecurities Fueled The Fad

Taylor Swift has been a little too quiet for my liking since the beginning of 2019. Sure, she's uploaded the occasional Instagram post, but I feel like I could have a little more T-Swift in my life. And I guess the singer heard my thoughts, because she penned something pretty special for Elle magazine. In honor of turning 30 this year, she wrote about what she's learned in life so far. She addresses a lot of interesting topics, but there's one little tidbit that talks about how, sometimes, the issues you've faced throughout childhood can come back in a different form as you get older, particularly with your friendships. If that alone makes you wonder, "What happened to Taylor Swift's girl squad?" don't worry. They're still around, but Swift gives her fans the reason why you don't see her posting about them 24/7.

On March 5, Swift took to Instagram to post a gorgeous photo of herself that appears in her self-analyzed Elle magazine interview, which was set to come out the next day. "According to my birth certificate, I turn 30 this year," Swift began. "It’s weird because part of me still feels 18 and part of me feels 283, but the actual, factual age I currently am is 29."

She continued, writing, "I’ve heard people say that your 30’s are ‘the most fun!’ so I’ll definitely keep you posted on my findings on that when I know. But until then, I thought I’d share some lessons I’ve learned before reaching 30 with @elleusa, because it’s 2019 and sharing is caring."

Sharing is caring, so a big thanks to T-Swift for doing us all a solid and imparting all of her ~knowledge~ to us.

When it comes to her #GirlSquad (looking at you, Selena Gomez), Swift recognizes that, while she has a group of friends who she loves deeply, that wasn't always the case. Number 18 (entitled "Realizing childhood scars and working on rectifying them") on her list of 30 things she's learned reveals that, while she wanted to shout about her friendships "from the rooftops," she couldn't ignore the fact that there was a possibility that her posts made some people feel the way she used to feel when she was a child — alone.

"For example, never being popular as a kid was always an insecurity for me," Swift wrote. "Even as an adult, I still have recurring flashbacks of sitting at lunch tables alone or hiding in a bathroom stall, or trying to make a new friend and being laughed at."

Who dared to laugh at a young Taylor Swift? REVEAL YOURSELF TO ME!

Sorry, I just can't wrap my head around that, but I digress.

In my twenties I found myself surrounded by girls who wanted to be my friend. So I shouted it from the rooftops, posted pictures, and celebrated my newfound acceptance into a sisterhood, without realizing that other people might still feel the way I did when I felt so alone. It’s important to address our long-standing issues before we turn into the living embodiment of them.

It seems like Swift may be hinting that her insecurities about her past may have, in some way, fueled her "girl squad" social media era. Perhaps her coming to terms with that reality may be the reason why her girl squad has become less prominent on her feed despite her continued friendships with many of the folks who were regular faces in her squad like Selena Gomez and Karlie Kloss.

In all honesty, the fact that Swift took the time to reflect on the way she was celebrating her friendships, and how that may have unintentionally made some fans feel lonely, is incredibly big of her. And besides, when you have close friendships, it doesn't matter how much (or how little) you post about each other online. True friendship has nothin' to do with that, so kudos to Taylor Swift for learning that life lesson (before turning 30, no less).