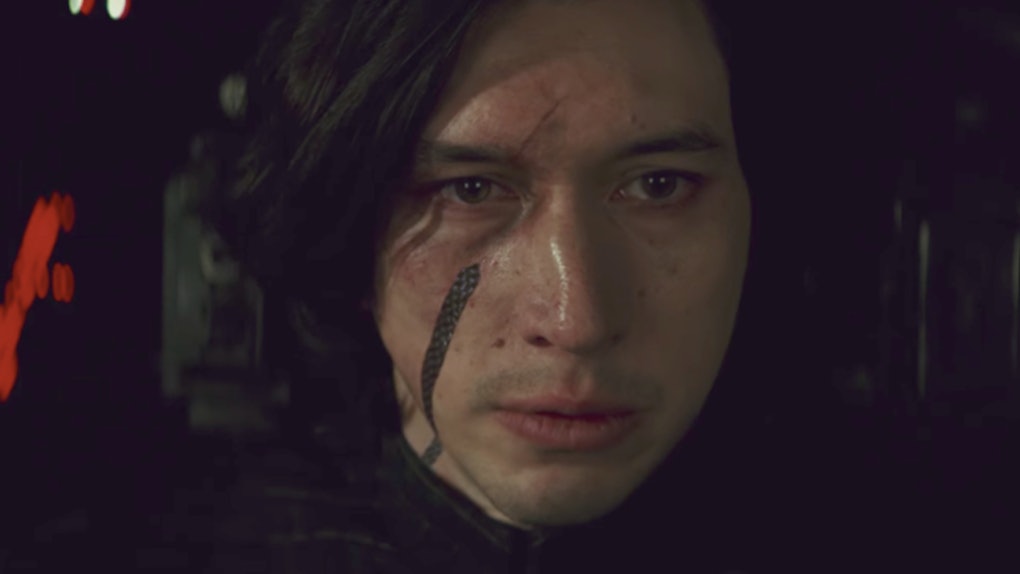 With The Last Jedi coming out in just days, it's time for all of us to reboot our memory when it comes to everything that went down in The Force Awakens. The biggest question The Force Awakens left behind that The Last Jedi is rumored to answer is who are Rey's parents? Some theories say her dad is Luke Skywalker, and others say she's Kylo Ren's sister, making Leia Organa and Han Solo her parents. But outside of Rey's parentage theories, what happened to Kylo Ren's face? The Force Awakens' villain ended the movie in an intense lightsaber battle with Rey that left his face severely injured. The end of the movie left Kylo Ren's fate ambiguous, as we never actually saw him saved before the ice planet the First Order inhabited was destroyed. But in the trailers for The Last Jedi, we see Kylo Ren survived and has been left with a gnarly scar stretching across his entire face.

Basically, what happened was Rey and Kylo Ren began to battle after Finn and Kylo Ren fought, leaving Finn severely injured and passed out in the snow. This battle was building up between Rey and Kylo Ren for the entirety of the movie and came after the devastating scene where Rey and Finn watched helplessly as Kylo Ren murdered Han Solo, his father. At one point in their battle, as the ice planet is literally imploding and Rey is standing at the edge of that implosion, Kylo Ren says, "You need a teacher. I can show you the ways of the force." Rey then uses the force to win the fight against Ren, and that's where she struck that blow that left him with the scar on his face. Don't forget that she used Luke Skywalker's lightsaber to do it!

Diehard Star Wars fans noticed that Ren's scar is placed slightly differently on his face in The Last Jedi, and being the diehard fans they are, they weren't pleased to see the film's director, Rian Johnson, had made that slight adjustment to the scar. In The Force Awakens, Ren's scar stretches diagonally across his right cheek and up the center of his forehead, right above his nose. In The Last Jedi trailers, the scar above his nose has been slightly adjusted to above his right eyebrow, so it doesn't go straight up his forehead/the bridge of his nose. We also see there's some kind of black bandage (?) covering the scar across his cheek in The Last Jedi trailers.

Star Wars fans called Johnson out for making the change. Johnson originally denied the scar was moved, but then he backtracked.

So it was moved! The truth is all the fans wanted, Johnson! Anyway, if there's one person who definitely isn't excited to watch The Last Jedi, it's... Kylo Ren himself. Yup, Adam Driver doesn't want to watch The Last Jedi. And his reasoning makes a little sense, but even after you hear it, you'll still find yourself saying, "But dude, come on... It's Star Wars..." In an interview with Esquire, Driver revealed he has a tough time watching his own movies because he's his own biggest critic. He told the outlet,

I can’t just watch it objectively. I always hate it and then come back to, like, ‘Okay, that’s fine, it’s not about me. It’s the story.’ I can’t watch it once. I have to watch it five times, you know? The movie is over. It’s on film, so it’s permanent. But if I think about it more, it’s just an obsessive loop I keep playing in my mind that I can’t get caught up in because it’s totally self-destructive and not helpful moving forward.

He did watch The Force Awakens, however. He told Esquire that his wife, Joanne, hadn't seen The Force Awakens and didn't know any details about it, so he watched it with her. But he didn't have a good time. He said,

The Force Awakens is the only movie I’ve sat with an audience and watched. Joanne hadn’t seen it. I didn’t tell her anything about it. I didn’t tell her I kill Han Solo. Credits started, the whole scroll at the beginning, and they start screaming, ‘Oh my God! It’s happening,' And I flash-forward to where I killed Han, and I got really sick, and went really cold, waiting for when it was over.

More like this
The 'Space Jam: A New Legacy' Trailer Will Bring Back All Your Childhood Memories
By Cianna Garrison
The 'Zola' Movie Trailer Will Have You Reliving The Iconic Twitter Story
By Dylan Kickham
Here's How To Watch 'Promising Young Woman' For Free If You're A College Student
By Ani Bundel
Stay up to date