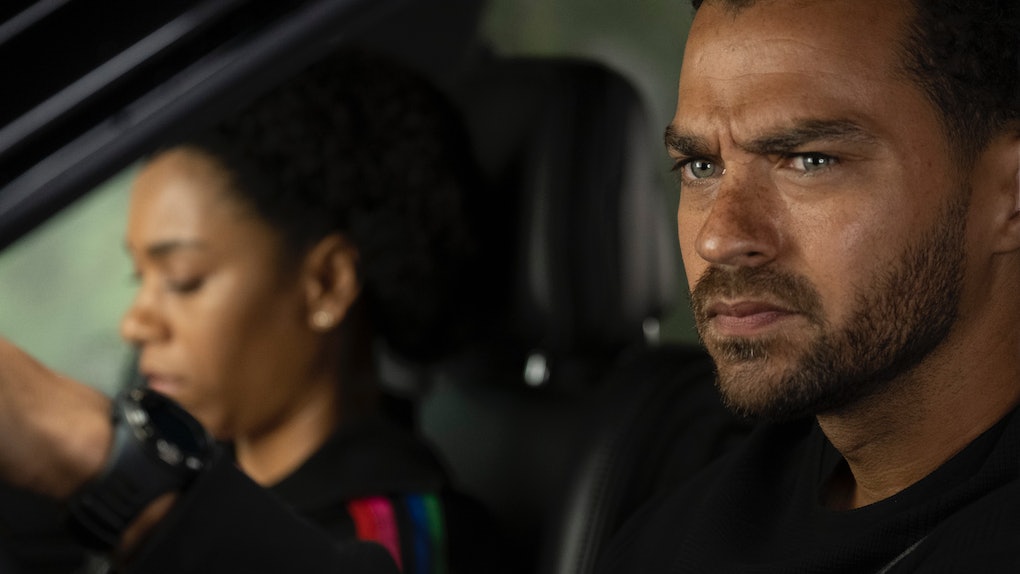 What Happened To Jackson In The 'Grey's Anatomy' Season 15 Finale? Here's What We Know

Jackson and Maggie's relationship navigated rocky waters on this season of Grey's Anatomy, and the Season 15 finale hinted that an even bigger obstacle is heading their way. On the way home from their disastrous camping trip, the couple were sidelined by the Seattle fog, meaning that the tension between them began to boil. Jackson left the car to check out the fog, but when Maggie went after him, he was nowhere to be found. What happened to Jackson in the Grey's Anatomy Season 15 finale? It's safe to say he probably isn't just walking casually along the road.

ICYMI, Maggie (Kelly McCreary) accepted Jackson's (Jesse Williams) proposal to move in together a few weeks back, but his idea to retreat into the woods and have a romantic camping trip didn't go over as smoothly. Maggie couldn't adjust to the great outdoors, and Jackson didn't like that she wasn't even trying to appreciate one of his interests. Their disagreements lingered in the air on their trip home, but the couple's spat took a serious turn when Jackson left the parked car to walk off into the fog.

After seemingly waiting for a while, Maggie stepped outside, calling his name and getting no response. Wandering around in foggy darkness definitely doesn't bode well for Jackson, and the episode ending on this ominous note has spiked fans' concerns for him. Has he gotten into an accident? Has he walked to the point of getting lost? In addition to wondering where he went, viewers are also hoping this is a sign that Jackson and Maggie's relationship doesn't last. They know a happily ever after when they see one, and this pair hasn't exactly stirred up those feels.

For now, Jackson doesn't appear to be facing death, as Williams is set to return as a series regular next season. However, Grey's Anatomy showrunner Krista Vernoff did admit that Jackson's fate is unknown, telling The Hollywood Reporter:

It was a creative decision. It was a cliffhanger. I want people to come back [in the fall] and talk all summer and wonder what happens to him. We have not mapped it out ... What I love about act six of our finale is we gave ourselves so much to play with for next season on all the storylines.

Jackson's whereabouts are definitely a big question, and Vernoff told TVLine that his disappearance is "worrisome." But the season finale also established several other storylines that need answers in Season 16. Meredith (Ellen Pompeo) came clean about her insurance fraud, and Webber (James Pickens Jr.) and Karev (Justin Chambers) fessed up to their involvement, resulting in Bailey (Chandra Wilson) firing all of them. Meredith then reciprocated DeLuca's (Giacomo Gianniotti) "I love you," but she now faces jail time. She also told Karev about the reason behind Jo's (Camilla Luddington) depression, and Jo agreed to spend time in the hospital's psychiatric ward.

On a brighter note, Teddy (Kim Raver) and Owen (Kevin McKidd) confessed their love for each other just as their daughter arrived, and Nico (Alex Landi) and Schmitt (Jake Borelli) are also staying together. Meanwhile, Amelia (Caterina Scorsone) recognized that she needed time with herself before jumping into a relationship with Link (Chris Carmack). It's a melting pot of highs and lows at Grey Sloan right now, so fans will have to wait and see what kind of stories Season 16 tackles first.

Season 16 of Grey's Anatomy premieres this fall on ABC.