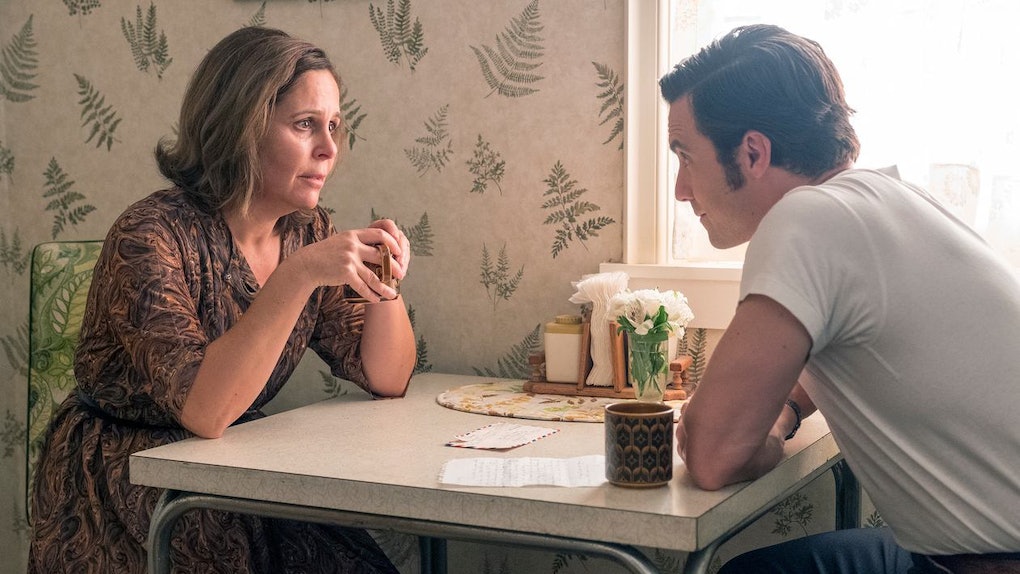 What Happened To Jack's Mom? A 'This Is Us' Theory Could Give Fans More Pearson Insight

This Is Us loves a weepy father-son moment. Whether you tear up over Randall comforting a dying William or Jack telling his teenage sons they'll only have each other someday, the Pearson men's affection for each other pales in comparison to Jack's relationship with his father. We know Jack essentially cut off ties with his dad after meeting Rebecca, but what role did his mother play during Jack's married life? The show has alluded to Marilyn Pearson not being around post-1970s, but some viewers have pointed toward clues crafting a believable theory about what actually happened to Jack's mom.

When we last saw Marilyn (Laura Niemi), war vet Jack (Milo Ventimiglia) was helping her leave behind her abusive husband Stanley (Peter Onorati). The timing of her moving in with a friend coincided with Jack and Rebecca's reconciliation after the latter broke things off with her first love. As the pair washed dishes in Marilyn's friend's kitchen, viewers assumed that Rebecca met Jack's mother later that night.

On the other hand, Jack's dad didn't know that he married Rebecca until Jack asked him for money to buy the couple's dream house. Rebecca also didn't meet Stanley until the late '80s, when the elder Pearson was dying and she and Kate visited him in the hospital. Marilyn's later life is a mystery, but based on these details, it looks like her separation from Stanley stuck. So, were the Big Three ever able to call someone other than Rebecca's awful mother "Grandma"?

Jack mentioned in one of the early episodes that his mom had knitted the “big three” onesies for the triplets, so I assume they had some sort of relationship. I can’t remember if she’s been mentioned since then though!

In the pilot, Jack uttered this line soon before Rebecca went into distress during childbirth and he was pushed out of the room. It's safe to say that you can write off anything from that early in a show's run as susceptible to future change. But remembering this particular detail potentially fills in gaps in the Pearsons' timeline that we may see onscreen soon. Based on Jack's line, it looks like Marilyn was definitely around while he and Rebecca were adjusting to parenthood. Given that the youngest Big Three actors are currently in the throes of puberty and turning into their own versions of the teenage Pearsons, maybe Season 4 of This Is Us will focus on how Marilyn helped the couple handle their babies.

However, as celebrating holidays with her wasn't an option by the time the kids were in elementary school, did Marilyn die when they were still fairly young? It seems likely, and after receiving telling episodes about where Jack's dad and brother ended up, fans are naturally curious about what happened to his mother. Did she have the same heart condition as Jack and die unexpectedly? Plus, presuming she knew Nicky went off the grid after Vietnam, did Marilyn ever reach out to her younger son? Most importantly, how did Jack react when his mom died?

These writers definitely have a lot to explain when it comes to the first Mrs. Pearson, but thanks to that pilot hint, maybe we can expect answers coming up soon. Season 3 of This Is Us continues on Tuesday, Feb. 19, at 9 p.m. ET on NBC.