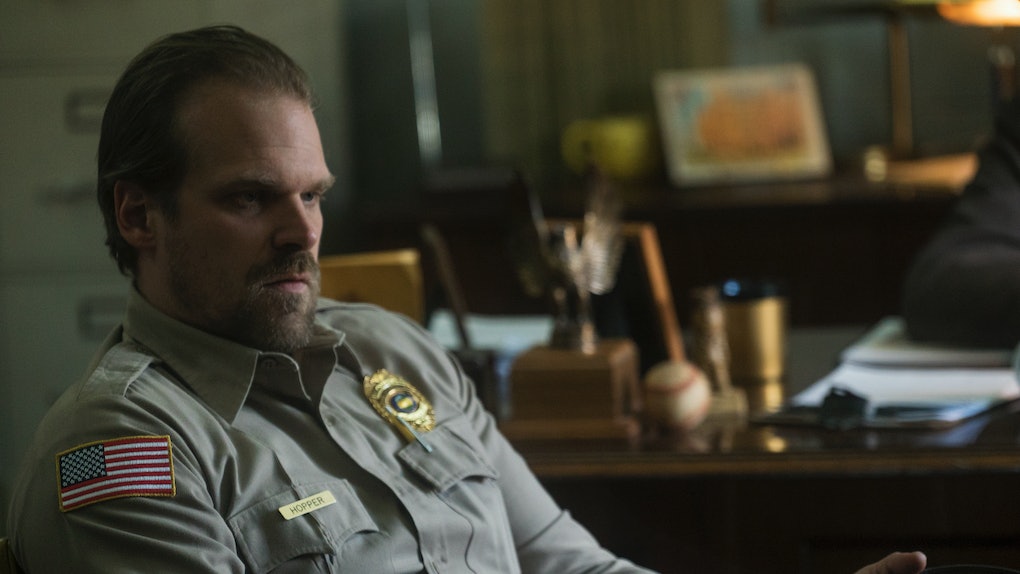 What Happened To Hopper's Daughter On 'Stranger Things'? Sara's Story Is So Sad

Everyone on Stranger Things appears to have a layered and complicated past, and Police Chief Jim Hopper is no exception. There's more to his narrative than just hard drinking, policing, and helping rescue kids from alternate universes. You may or may not recall that once upon a time he had a child, who sadly passed away before the series takes place. What happened to Hopper's daughter on Stranger Things? In Season 1, the audience caught glimpses of the tragedy as it unfolded via flashbacks, and Season 2 will apparently delve deeper into the story.

Right now, we only have a few pieces of the puzzle that is Hopper's backstory. His daughter was named Sara and she had cancer, but despite undergoing chemotherapy, she eventually passed away. Hopper had once been married to a woman named Diane, Sara's mother, but they divorced and Diane went on to remarry. Despite Hopper's silence, lack of emotion, and passionless attitude, the previous episodes of the series revealed that his daughter's death had a profound effect on him. The flashes of him with his child showed a softer, vulnerable, and heavy side of him, and it's made clear that he would do anything to have just one more moment with his little girl.

According to the actor behind Hopper, David Harbour, the next chapters of Stranger Things will expand on Sara's story and the impact she's made. Although, don't expect a "literal" explanation. This is Stranger Things, after all. He told TV Guide,

Hopper's daughter will be the primary focus of Season 2, but not in the way that you think it will be. Hopper's understanding of that relationship and Hopper's understanding of being a father and of being a man grows deeper and deeper in Season 2, and we get a lot of time to explore what that is, but it won't be in the literal way that you think it is.

So, will we see Sara in another series of flashbacks? Harbour's hints make it sound like the character's presence will be represented in another way, or perhaps through another person altogether. Some observant fans have speculated that there is a possibility that Sara is still alive in some form and that Eleven is the one embodying her. Or maybe Sara didn't die and was another victim of Hawkins Lab, considering their shady history — we know by now that Eleven probably wasn't the only test subject out there since her name indicates there are other numbers that came before her, and potentially after. Another question: Is Sara is in the Upside-Down now?

Even if the theories don't exactly pan out, there's evidence that Hopper and Eleven have a special connection that will develop further in Season 2. Could he be adopting her or will the relationship be further complicated? David Harbour spoke to the possibilities at New York Comic-Con last year, saying,

We end season one with Hopper sort of selling Eleven out. He doesn't know that she's capable of destroying groups of people, but he does kind of give her up to go into the upside-down to save Will. [...] I think it's a very complex relationship. So should Eleven reemerge, and Hopper knows something about that with those Eggo waffles... there's a lot of territory there.

Well, Eleven is definitely reemerging in a major way, if the latest trailer has anything to say about it. Time will tell if she's integral to Sara's supposed, figurative resurfacing. Hopper definitely has a ways to go in the feelings department and a lot of healing to do. Hopefully further exploration of his relationship with his daughter, in one way or another, will give him some more peace.