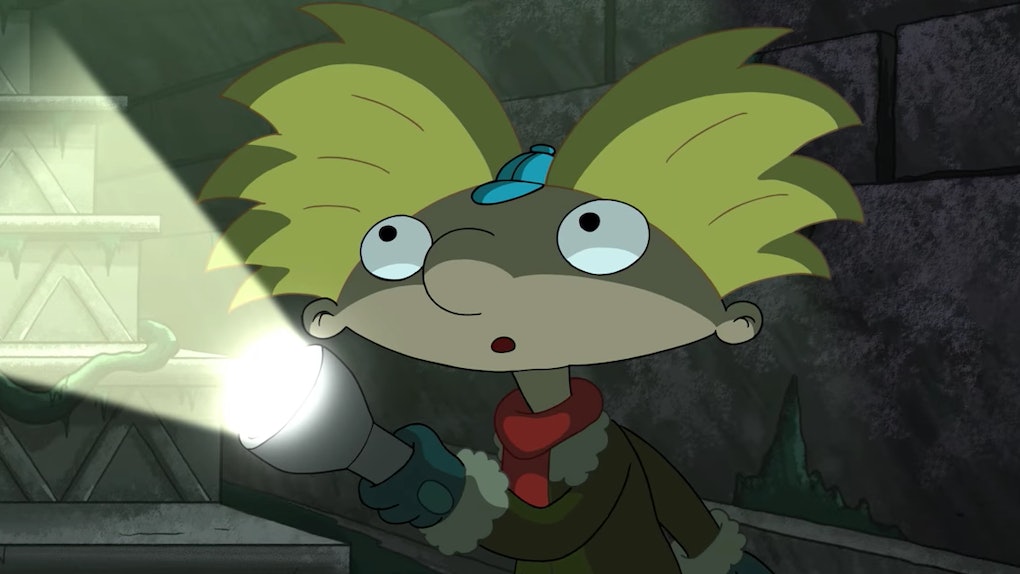 What Happened To 'Hey Arnold's' Parents? 'The Jungle Movie' Finally Tells Us

Nickelodeon has gifted '90s babies with the question they've been pondering for years: "What happened to Hey Arnold's parents?" Forget the turkey dinner, the network kicked off the holiday season with a special present for all those who needed closure. If the fate of your beloved football head has kept you up at night, you can now rest easy thanks to Hey Arnold: The Jungle Movie.

For those who don't want spoilers: Turn back now.

The Jungle Movie — which aired on Nickelodeon this Thanksgiving weekend and will be available online and on demand — decided to tackle this burning question. We last saw Arnold in 2004, so it was more than time for a comeback, and one that uncovered his roots was obviously in order. Arnold and the P.S. 118 gang decided to head to the fictional town of San Lorenzo to discover his mom and dad's whereabouts, and of course, adventure awaits.

We all loved watching Arnold grow up in a boarding house with his grandparents and a bizarre cast of characters, but there was always something missing. Though his friends at school were certainly entertaining — Helga, the bully who, in reality, is madly in love with Arnold; Eugene, the klutz who tucks his shirt into his underwear; Gerald, Arnold's right-hand man who knows every city urban legend there is — everyone wanted to see the young boy reunite with his mom and dad.

Arnold and the gang found his parents in San Lorenzo, but unfortunately they had suffered from sleeping sickness. I'm not entirely sure what that is, but somehow a group of elementary schoolers were able to help not only Arnold's parents, but the whole town, recover from this disease. Talk about a medical miracle.

Rejoice, you Nick fans! Arnold was able to head back home with his mother and father as a result of their cure. In all honesty, it seems like a pretty good idea to keep this new chapter going, wouldn't you say? The show's creative mastermind, Craig Bartlett, revealed to AV Club that he was not only looking to tell the story behind Arnold's mom and dad, but he's also willing to keep things going now that we've gotten some closure. According to the interview, he said,

I thought the challenge of making a story that both had complete closure and also left the door open for more stuff — well, that’s TV. TV’s like that. There’s always another season, or you hope there’s another season... And also, at the end of the movie, they’re starting sixth grade, so season six is also my hope

I'll be honest with you: I'm 27 and my top Hulu show behind Broad City and The Mindy Project is Hey Arnold, so I am all for continuing the show. I might be an adult, but I have no problem going back in time with the help of the P.S. 118 crew. This show is nostalgia at its finest, folks.

Fans of the show who once watched it at home now got a chance to play a part in the next generation of Arnold's story. Bartlett also told AV Club,

A really cool part of this story is that we were really encouraged by Nickelodeon to mix it up and not only bring back the O.G. Arnold artists and writers from the old days, but bring in the next generation, and I hired artists and writers who loved the show when they were kids. And I think that combination of old-school and new-school really energized the whole project.

If you're just a fan but not an artist, you can channel your love for the quirky gang with Love Tribe's Nickelodeon line at Macy's, which was created by Hybrid Apparel. There are Arnold tees, Rugrats sweatshirts, and plenty of other '90s-inspired looks to add to your closet — which are perfect gifts for the holidays!

"We got the idea that it would be really great to design something that was nostalgic and reminded us of our childhood. The bright colorful palette gives the line a fun, youthful, playful feel," Bonnie Dogan, vice president of sales for specialty retailers at Hybrid Apparel, tells Elite Daily.

What a time to be alive, folks. Oh, Arnold, we love you... but probably not as much as Helga does.