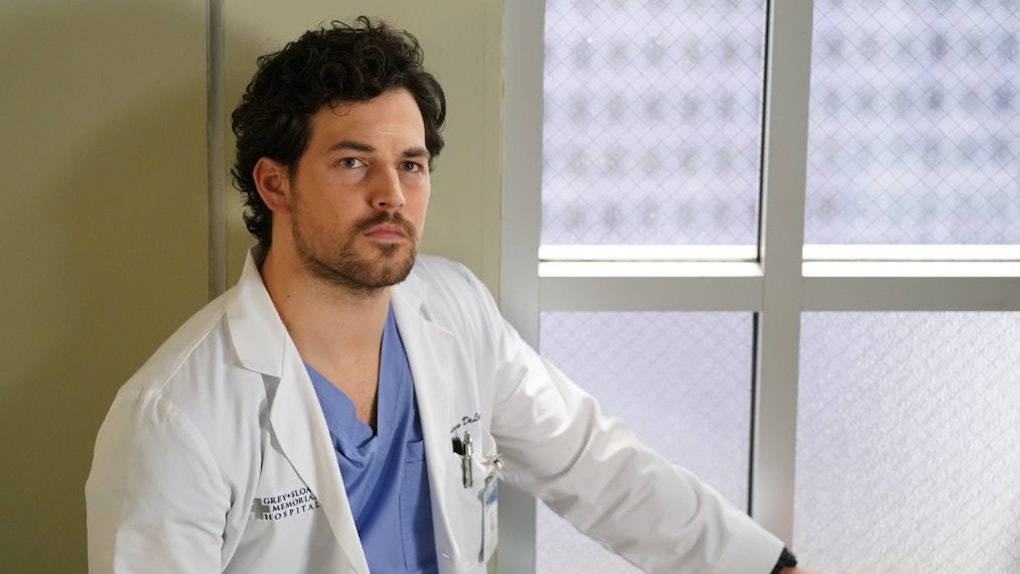 What Happened To DeLuca In 'Grey's Anatomy' Season 16? Here's Your Recap

When Season 16 of Grey's Anatomy ended this past spring, there were quite a few story threads left open. Production on the season was cut short due to the coronavirus pandemic, and so audiences were left hanging when it came to a few big storylines. One of those storylines is Dr. Andrew DeLuca's mental health journey, which took a few big turns last season. Ahead of the Season 17 premiere, here's a recap of what happened to DeLuca in Grey's Anatomy Season 16:

Throughout Season 16, DeLuca's (Giacomo Gianniotti) behavior raised concerns among his friends and family. He began making rash decisions and lashing out at the people around him, like in Season 16, Episode 14, when DeLuca became manic while trying to solve the mystery of patient Suzanne's diagnosis. He wound up going behind Meredith's (Ellen Pompeo) back, and even though he did save Suzanne, Meredith told him that he was acting like his father, who has bipolar disorder. DeLuca didn't appreciate the comparison to his father, and he told Meredith: "I don’t need this. I don’t need you. We’re done."

And with that, MerLuca ended.

After the breakup, DeLuca's behavior became more and more erratic. When a snowstorm hit Seattle and all the roads were closed, DeLuca traversed through the blizzard on foot in order to deliver a patient's organ. Then, when DeLuca suspected a patient's aunt of human trafficking, he made a huge scene in the middle of the hospital. Even though it appeared he was right about his suspicions after all, no one took him seriously because of his outburst and he was escorted out by security.

DeLuca wasn't the only doctor at Grey Sloan Memorial with worrisome behavior last season. Richard Webber (James Pickens Jr.) started becomings disoriented and agitated toward the end of the season, and his diagnosis stumped everyone. DeLuca was the only one who figured out that Richard was suffering from cobalt poisoning from his hip replacement. But solving Richard's case did not make things any better for DeLuca. After Richard's life-saving surgery, Meredith found DeLuca having a breakdown on the floor of the hospital. She took him home to take care of him, and that's where the show left off.

Since then showrunner Krista Vernoff has confirmed to PEOPLE that DeLuca has bipolar disorder. "DeLuca, after finally diagnosing Richard, went from manic to depressed," she said. "That’s what that last scene was, when he’s sitting on the floor, crying in a pit of despair after not seeing anything but high for the last several episodes."

Season 16 ended just as DeLuca was getting the care he needed from Meredith, so hopefully, Season 17 will continue to follow him on that mental health journey.