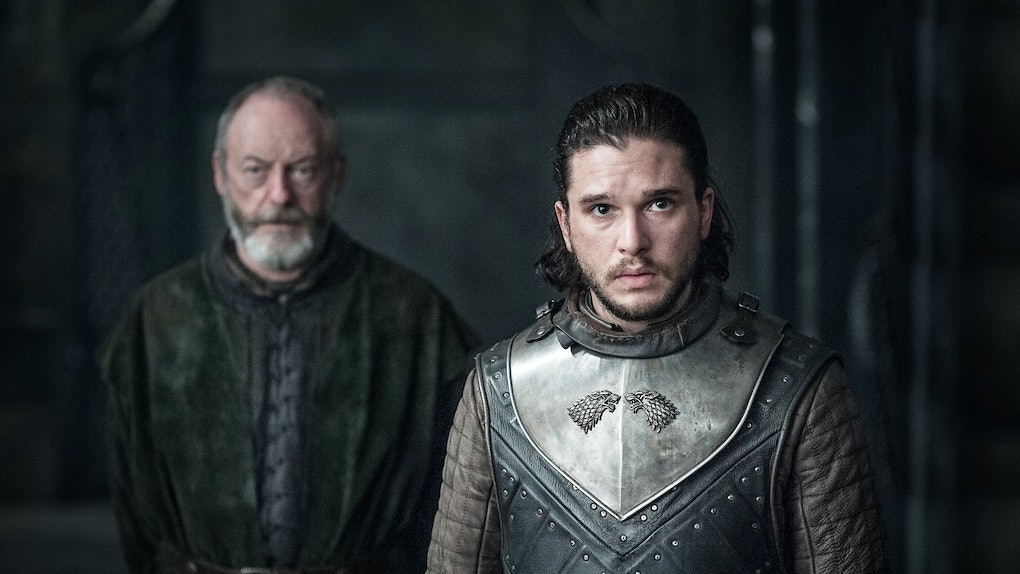 What Happened To Davos In 'Game Of Thrones' Season 7? Jon's Right-Hand Man Is A Key Role

Game of Thrones first arrived in Westeros at Winterfell in Season 1, introducing most of the main characters over the first two episodes. However, Season 2 also brought significant long-term figures aboard, including Margaery Tyrell and Brienne from the Renly Baratheon team, as well as Stannis Baratheon and his followers, including Melisandre and Davos Seaworth. The Baratheons and the Tyrells are all dead, but Brienne, Melisandre, and Davos are still on track to appear in Season 8. What happened to Davos in Game Of Thrones Season 7?

Davos Seaworth started life at the bottom, a smuggler, and thief born in King's Landing Flea Bottom slums. When fans meet him in Season 2, he's been raised up. Caught stealing by Stannis before the show began, he took his lumps, gave up parts of his fingers, and was then hired to be Stannis' straight-shooting advisor. Stannis liked his Anti-Yes Man so much, by the end of the season, Davos was promoted to be his Hand.

Over the next three seasons, Davos remained steadfastly loyal to his King, and Stannis' daughter Shireen, who taught the smuggler to read. (Though he does go against Stannis once, to rescue Gendry from Melisandre's blood magic, and send him home to Flea Bottom.) That ended when Stannis sent Davos to the Wall, to sacrifice Shireen without Davos' knowledge. Stannis wound up slaughtered in the battle that ensued, leaving Davos with no one to follow.

Davos didn't wait long, as the resurrection of Jon Snow by Melisandre gave him a new leader to believe in. When Season 7 rolls around, Jon has taken back Winterfell and dismissed Melisandre at Davos' insistence for the role she played in Shireen's death. Davos is now Jon's defacto Hand of the King, traveling with him down to Dragonstone, the plan is to convince Daenerys to let them mine Dragonglass and maybe join them in fighting the Night King.

Davos is a little out of his element at Dragonstone, but he recognizes in Daenerys' followers the same loyalty he feels for Jon. He also hunts up his old friend Gendry in Flea Bottom, who, as a blacksmith, can forge the dragonglass Jon's people are mining. He even agrees to go with Jon beyond the Wall, to attempt the capture of a wight, to convince others of their quest. He winds up remaining behind at Eastwatch to send for help when needed.

Davos is with Team Jon and Daenerys at the Dragonpit at the end of Season 7, and part of the entourage headed for Winterfell when the season closes. When Season 8 begins, Davos will be part of the arrivals, setting about the task of preparing for the coming war against the Night King.

While the reveal of Jon's parentage will test some, choosing between Daenerys and Jon, or Stark and Targaryen, most assume for Davos, the resurrection will override whatever the King in the North's real name is. Davos' pragmatism is such that he won't care what Jon is called, as long as they're fighting on the same side. Fans will find out when Game of Thrones premieres on April 14.