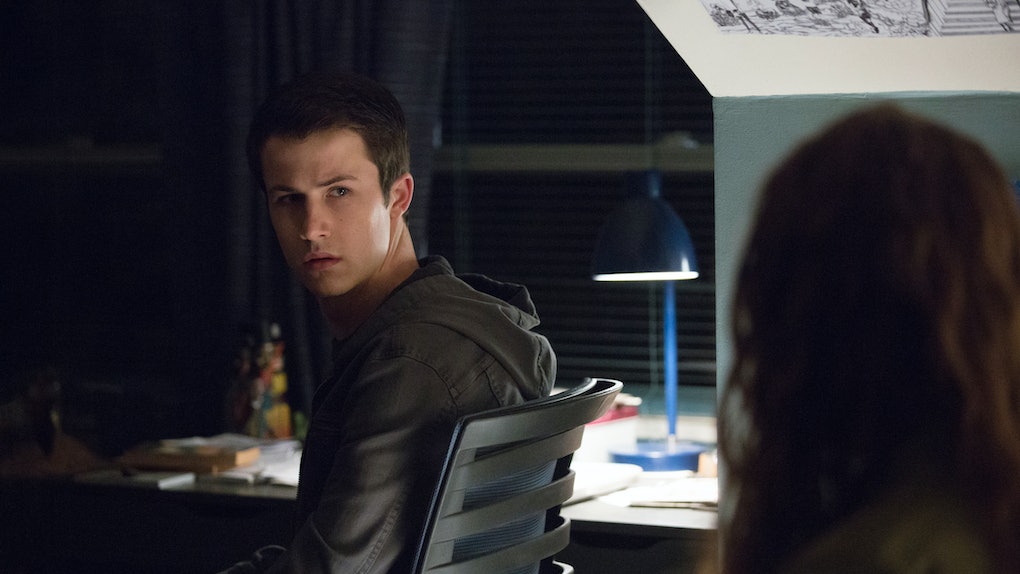 What Happened To Clay In '13 Reasons Why' Season 2? Here's Your Refresher

The trailer for Season 3 of 13 Reasons Why hints that Clay Jensen is in for another stint of deadly drama at Liberty High. While fans have yet to see how his interference in Tyler's school shooting plans fared, Season 3 footage also implies Clay is heavily suspected in the death of bully Bryce Walker. Before theorizing about how he's tied to the homicide, though, let's catch up on what happened to Clay in 13 Reasons Why Season 2.

Clay's (Dylan Minnette) fierce loyalty to Hannah (Katherine Langford) began to affect him negatively in Season 2 of the Netflix drama. The start of the season revealed that his recording of Bryce (Justin Prentice) confessing to raping Hannah was dismissed because it was considered conjecture and hearsay. This may have contributed to Clay's recurring hallucinations of Hannah, which he tried to ignore by attempting to carry on a relationship with Skye (Sosie Bacon). However, Skye sensed Clay was still mourning Hannah, and during her hospitalization after self-harming, she broke up with him.

Back in school, Clay kept receiving Polaroids suggesting Hannah wasn't the only girl Bryce had raped. He also tracked down the missing Justin (Brandon Flynn), who was nursing a heroin addiction while living on the streets. Clay secretly took him in soon before tracing the scene of the Polaroid pictures to the "Clubhouse," a shed on campus where athletes hung out. Wanting to take matters into his own hands, he then uploaded Bryce's confession and Hannah's tapes explaining her suicide to the internet.

Zach (Ross Butler), once Bryce's close friend, then gave Clay a full box of Polaroids from the Clubhouse, revealing himself as the one who sent Clay the first batch of pictures. As the stakes surrounding the Bakers' case against the school district intensified, visions of Hannah began haunting Clay so much, he even considered killing both Bryce and himself. Season 3 might call back to this scene when police investigate the football star's murder, but the truth is, Clay faced even more emotional trauma as Season 2 continued.

Following Bryce's sexual assault trial for raping Jessica (Alisha Boe) and his probation sentence, Clay's family adopted Justin. Any happy bonding moments were sidetracked when Clay learned of Tyler's (Devin Druid) plan to start shooting at a school dance. He was able to talk him down from action, but as Tony (Christian Navarro) drove Tyler away from the scene, Clay was left holding Tyler's gun as police sirens sounded in the distance.

Taking place eight months later, Season 3 seems to suggest that any repercussions Clay faced for this moment are now resolved. But the new season's trailer confirms an even bigger weight is on his shoulders, as evidence potentially points toward him as Bryce's killer. While the 13 Reasons Why Twitter account has broken down possible motives for some of the teen characters, it has yet to single out what Clay's reasoning would be. Such ambiguity may mean viewers should pay extra attention to Clay's behavior when new episodes of 13 Reasons Why launch.