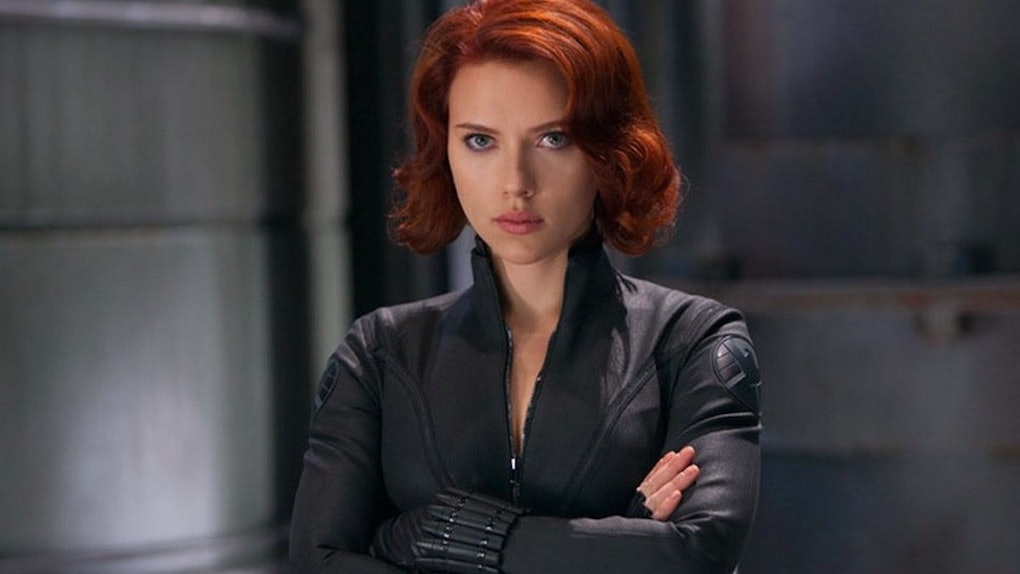 What Happened To Black Widow Before 'Avengers: Endgame'? Refresh Your Memory ASAP

Avengers: Endgame opens this weekend, and it's been a long year since the last Avengers movie took over theaters. Avengers: Infinity War opened in April 2018, and as fans are preparing for Endgame, they're racking their brains to remember what's going on with all of the Marvel Cinematic Universe's dozens of characters. It's easy to remember what's going on with a character like Captain America, whose standalone movie just came out earlier this year. But, what happened to Black Widow before Avengers: Endgame?

Black Widow, played by Scarlett Johansson, first appeared in Iron Man 2. The former Soviet spy, whose real name is Natasha Romanoff, is an undercover Agent of S.H.I.E.L.D. who works as Tony Stark's assistant. After that, Black Widow has appeared in three Avengers movies as well as Captain America: The Winter Soldier and Captain America: Civil War.

Although Black Widow doesn't technically have any actual superpowers, that doesn't mean she isn't powerful. As a spy in the Soviet Union, she was trained to be a skilled martial artist and sniper. She's also outfitted with a variety of high-tech weapons, including well-equipped gauntlets that she wears on her wrists. Now that she's reformed and is seeking redemption as an Avenger, she uses her skills and tools to fight evil forces in the universe.

Johansson spoke to Entertainment Weekly about the difficulties of playing Black Widow. She said:

It’s a lot of big sequences, fight sequences, and that’s challenging of course because of my character and Jeremy [Renner’s] character in particular, we don’t have any superpowers. Our superpowers are all our skill set.

It is a skill set that has come in handy for her. In Avengers: Infinity War, Black Widow teams up with the rest of the Avengers to fight Thanos, who has a plan to collect all the Infinity Stones and wipe out half of all life in the universe. During Infinity War, Black Widow finds herself fighting Proxima Midnight, one of Thanos' followers. Black Widow fights her, alongside Okoye, who first appeared in Black Panther, and Scarlet Witch, who debuted in Avengers: Age of Ultron. In a virtuosic display of their powers, the three women defeat Proxima Midnight. Unfortunately, it isn't enough to take down Thanos. He still manages to get his hands on all the Infinity Stones and make half the lives in the universe disappear with just a snap.

Black Widow last appeared for a brief scene at the end of Captain Marvel. Rhodey (Don Cheadle) rushes to tell her that Nick Fury's (Samuel L. Jackson) pager has suddenly stopped sending a signal. Black Widow and the other heroes are unsure what to do, until suddenly Captain Marvel (Brie Larson) herself shows up. It looks like Black Widow will be teaming up with Captain Marvel in Avengers: Endgame.

There isn't a lot of information about Black Widow's backstory or her life before she entered the Marvel Cinematic Universe. But, fans will get to find out more when the recently announced Black Widow movie. Johansson talked to Digital Spy about the standalone movie and said:

There's a lot of opportunity to mine that storyline. She's got a really rich origins story. There's a lot of places you can go – you can bring it back to Russia. You could explore the Widow program.

It sounds like there's a lot more to Black Widow's story that fans don't know yet, but it sure will be exciting to learn more.