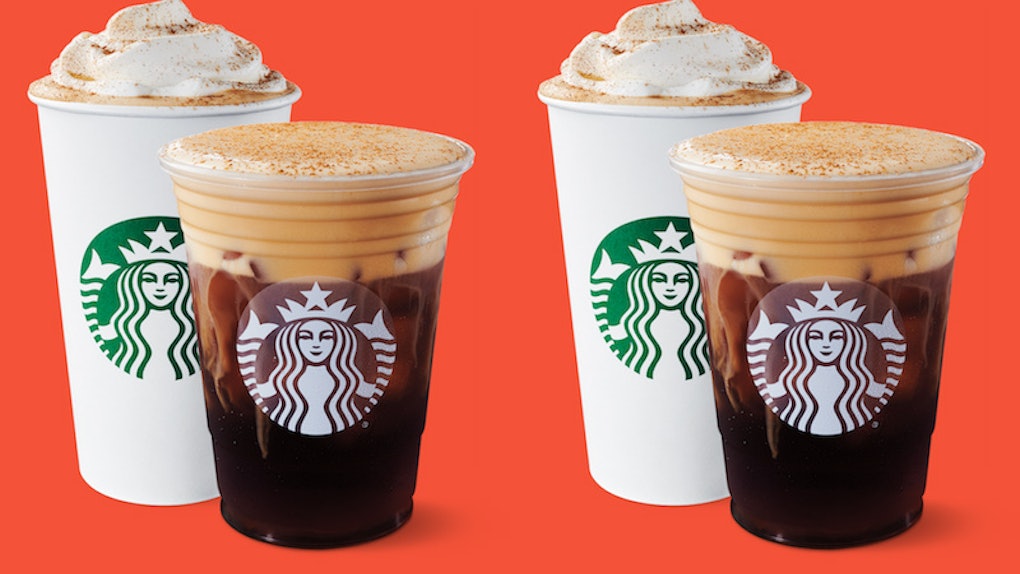 What Does Starbucks' Pumpkin Cream Cold Brew Taste Like? It's A Lighter Take On A PSL

It's almost time, you guys. Your beloved Pumpkin Spice Latte will officially be available at Starbucks on Tuesday, Aug. 27. But, if you thought that was the only good news the coffee giant had up its sleeve this fall, then you were sorely mistaken. On Monday, Aug. 26, Starbucks announced the release of its brand new Pumpkin Cream Cold Brew, and it just so happens to be the chain's first new pumpkin sip in 16 years. With a release this big, you probably want all the details. First and foremost: What does Starbucks' Pumpkin Cream Cold Brew taste like? If you're used to the PSL, you might want to prep your taste buds for a lighter flavor.

If you're just getting hip to the news of this new drink, I'll fill you in on a few more specifics. Fans of chilly beverages will be pleased, because the Pumpkin Cream Cold Brew starts out with Starbucks Cold Brew and vanilla syrup. Rather than dousing the drink with pumps of pumpkin syrup, this seasonal sip gets its flavor from the pumpkin cream cold foam that sits on top of the drink. To make sure the taste is perfect (and that it's totally 'Gram-worthy), it's all topped with a dusting of pumpkin spice topping, according to Starbucks.

Sounds like a great chilly alternative to the piping hot PSL, right? Thankfully, it seems to live up to the hype in the tastes department.

Tina Kolokathis, deputy editor of news & entertainment at Elite Daily, got a taste of the Pumpkin Cream Cold Brew, and she shares that it "gives you that fall taste without so much sugar." Why is that? Well, Kolokathis explains how the base tastes like a "cold brew with cold foam," but you get a "hint of pumpkin with the cream and the pumpkin spice sprinkled on top."

When it comes to comparing the new drink to the OG, she says, "The PSL is definitely more of a treat, and tastes very sweet, whereas the cold brew is more of an everyday order that isn't too sweet."

Starbucks' description of the flavor also hypes this drink as a milder PSL, explaining how the "Starbucks Cold Brew cocoa notes are perfectly complemented by flavors of vanilla and real pumpkin which results in a smooth, well-rounded beverage that balances the flavors of the season without being overly sweet."

Now, I love dollops of whipped cream on top of warm espresso sips as much as the next fall fanatic, but I must say it sounds like the Pumpkin Cream Cold Brew will be a great way to transition from summer to fall. Just because the fall sips hit menus in August doesn't mean temperatures automatically drop to "sweater weather," so a seasonal iced drink sounds like it will totally hit the spot.

Again, the new and returning fall drinks will be on menus in the United States and Canada as of Tuesday, Aug. 27, and they will be available for a limited time while supplies last. Other fall faves coming back include the Salted Caramel Mocha and the Pumpkin Cream Cheese Muffin. With a loaded menu lineup for the season, you'll have plenty of options to choose from as you take your go-to order from summer to fall. TBH, I'm very much here for a fall cold brew habit, especially with a sip as tasty as the Pumpkin Cream Cold Brew.

More like this
What Does Starbucks' Strawberry Funnel Cake Frappuccino Taste Like? It's A Summery Sip
By Cianna Garrison
These Cinco De Mayo 2021 Deals Include Free Tacos, $1 Slurpees, & $5 Margs
By Daffany Chan
Here's How To Find Asian-Owned Restaurants & Businesses To Support AAPI Communities
By Lara Walsh
Stay up to date