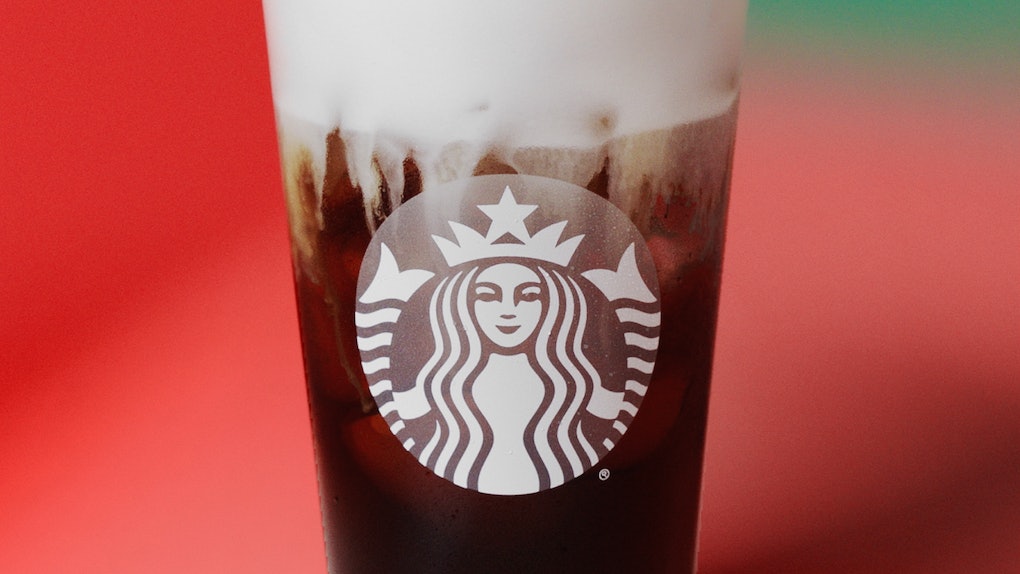 Months after dropping a new seasonal Pumpkin Cream Cold Brew, Starbucks is unveiling winter's answer to the fall sip — and TBH, it sounds even tastier than the original. You're not alone if you're wondering what Starbucks' Irish Cream Cold Brew tastes like. The festive iced sip will satisfy your sugar cravings without going overboard on the sweetness, so get ready to add a new holiday beverage to your rotation this season.

On Tuesday, Dec. 3, Starbucks surprised fans by unveiling its newest iteration on mixing flavored cold cream with its signature cold brew. According to the company, you'll be sweetening up your Starbucks Cold Brew with Irish cream syrup before it's topped with a layer of vanilla sweet cream cold foam and sprinkles of cocoa powder. Erin Marinan, the Starbucks product developer who modeled the sip after homemade Irish cream her family made, cites the cocoa notes from the cold brew as the perfect pairing for the chocolate in the Irish cream.

Tina Kolokathis, Elite Daily's Deputy Editor of News & Entertainment, got to try the limited-edition drink, and she says her first impression was that it is pretty similar to Starbucks' Pumpkin Cream Cold Brew, except with pumpkin flavors swapped out for cocoa.

Initially, she thought she was getting notes of hot cocoa in the cold foam, since she could smell the cocoa on top. But in the end, the drink is "more subtle" than the pumpkin variety, and it "tastes like a slightly sweetened cold brew with a hint of cocoa in the Irish cream."

This is the first time that the coffee giant has unveiled an Irish cream syrup, and you can customize any of your sips by adding the flavoring for an extra charge. A Grande Irish Cream Cold Brew will cost between $4.45 and $4.75. There's also the option to make the vanilla sweet cream cold foam topping with almond milk, coconut milk, or soy milk — if you'd rather go dairy-free.

You can head to your participating Starbucks locations in the United States and Canada for this limited-time sip starting on Dec. 3. However, I'd make sure to mark your calendar and plan an afternoon date with the new drink starting on Dec. 5, thanks to a new BOGO happy hour deal that runs every Thursday this month and includes the Irish Cream Cold Brew as well as Starbucks' other holiday drinks.

Like for all Starbucks happy hours, customers can head to their closest Starbucks storefront from 2 p.m. through 7 p.m. local time on Thursdays through the end of December for a buy one, get one free deal on any handcrafted beverage that's a size grande or larger. To partake, all you have to do is make sure you've downloaded the Starbucks app before you check out. Sounds like a great way to snag an Irish Cream Cold Brew.