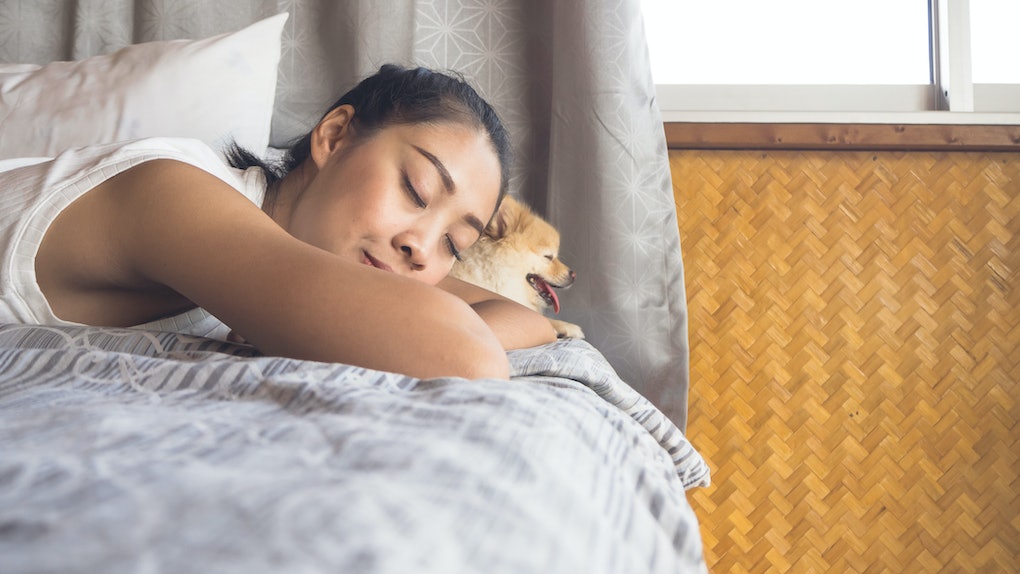 What Does Sleeping On Your Stomach Mean? Here's What Snoozing In Free-Fall Position Reveals About You

You’ve heard the phrase "you are what you eat," right? Well, what if I told you, you are how you sleep? There are a million and one studies that will tell you every move you make, every breath you take is a reflection of your personality, and it turns out your sleep position can share some secrets about you, too. One of the most common ways to sleep is on your stomach, so if that's your go-to snooze position, what does sleeping on your stomach mean, exactly? According to my research, there’s a lot of mixed signals.

Herman Fisher, co-founder and inventor of Spoon Sleep, tells Elite Daily that the most popular sleep position is to snooze on your side. Sleeping on your stomach, on the other hand — also known as the “free-fall” position — comes at a close second, Fisher explains. If you’re unfamiliar with this, it’s when a person lies flat on their stomach with their head turned in whichever direction they prefer, with their arms wrapped around and underneath the pillow.

Free-fall is definitely a comfortable position to snuggle up into when you're gearing up for a snooze. But, like everything else, there are pros and cons to sleeping on your stomach in regards to both your physical state and personality traits. Here are a few to look out for.

Sleeping on your stomach is called the "free-fall" position for a reason, friends.

According to NECTAR Sleep, those who fall asleep in the free-fall position (also referred to as "the skydiver") are often described as people who are "open, playful," and have "downright fun personalities."

Tummy sleepers are said to be free-spirited, and are up for trying new, challenging things. They go after what they want, when they want it, despite potential repercussions, because #YOLO, right?

2. You Can Be Overly Self-Assertive

Case in point, check out my girl Veruca Salt from Willy Wonka and the Chocolate Factory right here. You can't blame a girl for knowing what she wants and letting nothing — not even your favorite candyman — stop her from getting it.

But there's bold, and then there's brash, which is exactly what stomach-sleepers are often described as — ouch. Free-fall sleepers are noted for being incredibly blunt, so while going after whatever it is you desire is an admirable character trait, being snotty about it is not.

People who prefer to sleep on their stomach are also known to put up one hell of a front in terms of confidence. Despite their overwhelming self-assuredness and up-for-anything attitude, stomach-sleepers are recognized as having thin skin.

According to Sleep Train writer Kelsey Down, when you consider the body language of a stomach-sleeper, one could draw the conclusion that they aren't as sure of themselves as they'd like people to believe they are.

"It's a very defensive position," Down tells Elite Daily. "You've got your back to the rest of the world, protecting the most vulnerable parts of yourself."

4. You Feel Vulnerable In Your Relationships

When you're sharing a bed with your sweetheart, usually, in some way or another, you two are probably touching. Whether that means the two of you spoon throughout the night, one person's arm is cuddling the other, or there's butt-to-butt contact, it's a sign that the relationship is solid. Sleeping on your stomach, however, could be a billowing red flag.

According to Mattress Firm, people who sleep on their stomach while sharing a bed with their partner are showing signs of "anxiety, emotional fear, vulnerability, or lack of control in a relationship."

5. You're Prone To Back And Neck Problems

You'd assume that sleeping on anything but your back wouldn't have a direct effect on your spine, but according to Fisher, snoozing on your stomach can ultimately lead to a major strain on your lower back and neck.

The weight from your abdomen, which is the heaviest part of your body, can put pressure on your spine.

The spine is no longer in a natural symmetry when your back is out of alignment, and this can create different health issues related to tingling and numbness in limbs, tossing and turning, and even back and neck pains.

6. You Probably Have A Very Healthy Digestive System

If you're not a stomach-sleeper and are currently experiencing some difficulty in the digestion department, it might be worth giving this tummy stance a try.

LIVESTRONG reports that, according to Professor Chris Idzikowski of the Sleep Assessment and Advisory Service, falling asleep on your stomach can enhance healthy digestion. Additionally, because lying facedown makes digestion easier, your body is able to release gases and avoid inflammation.

More like this
Your Mars Sign Meaning Reveals A Lot About Your Sexual Needs, So Take Notes
By Roya Backlund
93 Clever Group Chat Names For Siblings, Because Your Family Ties Are Tight
By Jasmine Vaughn-Hall
The Netflix Reality Show You Should Watch, Based On Your Zodiac Sign
By Chelsea Jackson
Stay up to date