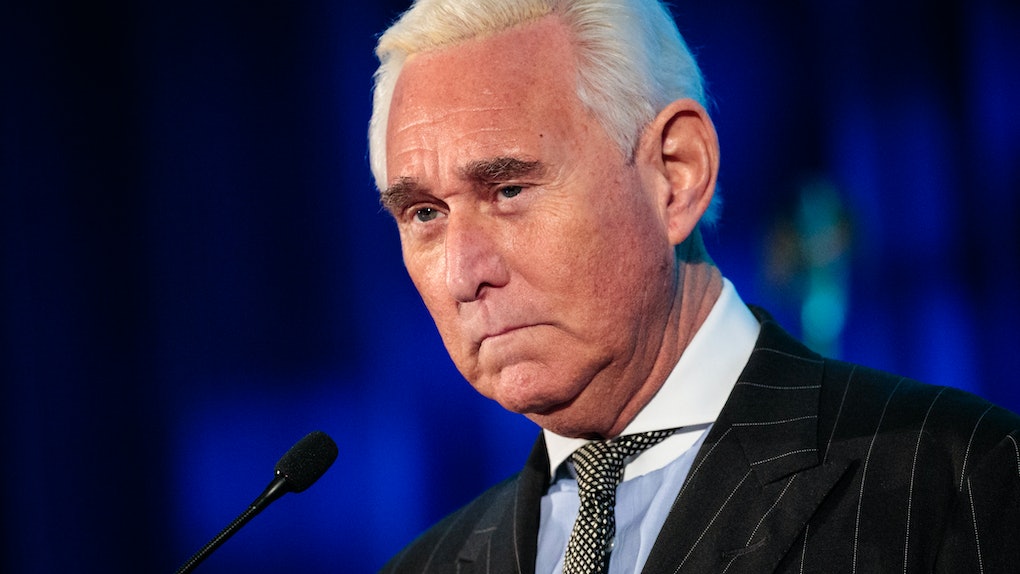 What Does Roger Stone's Indictment Mean For Trump? This Is Tricky

All eyes are on Roger Stone, a longtime associate of President Donald Trump who, on Friday, Jan. 25, was indicted on multiple charges brought by Special Counsel Robert Mueller's investigation into potential collusion between members of the 2016 Trump presidential campaign and Russia. Stone has said he was falsely accused and intends to fight the charges. However, Stone's arrest makes him the sixth Trump aide to be charged in the probe, which might have you wondering when, or if, the president will ever be nabbed in the investigation. So, what does Roger Stone's indictment mean for Donald Trump? Let's discuss.

Central to the issue are the charges brought against Stone, who has been a close friend of Trump for decades: one count of obstruction, five counts of making false statements and one count of witness tampering. The charges are in relation to his alleged relationship with WikiLeaks, the organization that, in October 2016, published emails from members of presidential candidate Hillary Clinton's campaign, which had been hacked by Russian operatives. According to his indictment, Stone allegedly sought the stolen emails from WikiLeaks at the direction of "a senior Trump Campaign official." Elite Daily reached out to the White House for additional comment, but did not immediately hear back.

But according to former federal prosecutor Renato Mariotti, who is not involved in the legal proceedings against Stone, his alleged crimes might not have much of an effect on Trump. Simply knowing about a crime, he points out, isn't a crime in and of itself. "Mere knowledge of a criminal activity is generally not a crime," Mariotti tells Elite Daily. "Reaching out to Russian operatives or WikiLeaks is not a crime." On the other hand, he says, "what would be a crime would be to help their scheme to distribute stolen emails succeed in some way or to agree to play a part in that or that distribution."

"The question here is, [the contact] to the Russia operation or WikiLeaks, was that done at the direction of Trump?" Mariotti adds. To be clear, as of Jan. 26 there is no evidence that Trump instructed Stone to connect with WikiLeaks, and the president has not been formally accused of or charged with any crime.

While Mariotti says it's too early to call how Stone's arrest factors into Mueller's investigation, he warns people against jumping to conclusions. "There is an assumption that people are making that this is building up to a grand conspiracy charge by Mueller, but it is careless and irresponsible to do that," he explains. "It may happen. It may not ... We don't know."

At least one thing is for certain, however. "This is what happens when you investigate complicated matters," Mariotti declares. He also states that, without strong evidence, proving the president and WikiLeaks had any potential agreement to commit a crime would be "hard to prove" beyond a reasonable doubt. In short: You'll just have to wait and see what Mueller turns up with, if anything.

In the predawn hours of Jan. 25, FBI agents arrested Stone at his Fort Lauderdale, Florida home on charges of witness tampering, obstruction of justice and making false statements in connection to the Russian hack in the 2016 presidential election. Elite Daily reached out to both Stone's representation and the White House for comment on the indictment, but did not hear back at the time of publication. The special counsel's office declined to comment. Lawyers for Stone denied any wrongdoing in a statement to CNN, however, and Stone himself said he will not plead guilty to the charges, per The Hill.

While the White House has denied that President Trump is involved with Stone's alleged crimes, the news has prompted fresh impeachment talks, with even Rep. Jerry Nadler (D-New York), the newly-placed chairman of the House Judiciary Committee, where impeachment proceedings begin, questioning the president's involvement on Twitter.

What seems to be most troubling is the contact between the senior Trump campaign official named in the indictment filing, who is said to be Steve Bannon, and WikiLeaks. Elite Daily reached out to representatives for Bannon for further comment, but did not hear back by the time of publication. Legal analysts told The Guardian that their communications "could represent criminal activity along those lines" or that "the alleged communication between the campaign and other parties could violate laws forbidding coordination between campaigns and outside political groups." The White House did not immediately respond to Elite Daily's request for additional comment.

“Focus on underlying conduct revealed in [the Stone indictment],” tweeted Ryan Goodman, former special counsel of the Department of Defense and co-editor-in-chief of blog Just Security. “The coordination between Trump Campaign and WikiLeaks via Stone gives rise to potential criminal campaign law violations."

Trump, however, doesn't exactly seem too worried. In a tweet shared on Jan. 25, he suggested that his longtime pal has been targeted by what he called the "Greatest Witch Hunt in the History of our Country," adding, "NO COLLUSION!"

In another tweet, posted back in December 2018 amid looming speculation that Stone might be arrested in the probe, Trump made similar comments about the investigation while pointing out apparent comments made by Stone saying that he would "never testify" against the president.

Clearly, this drama is just getting started. Stay alert, guys.