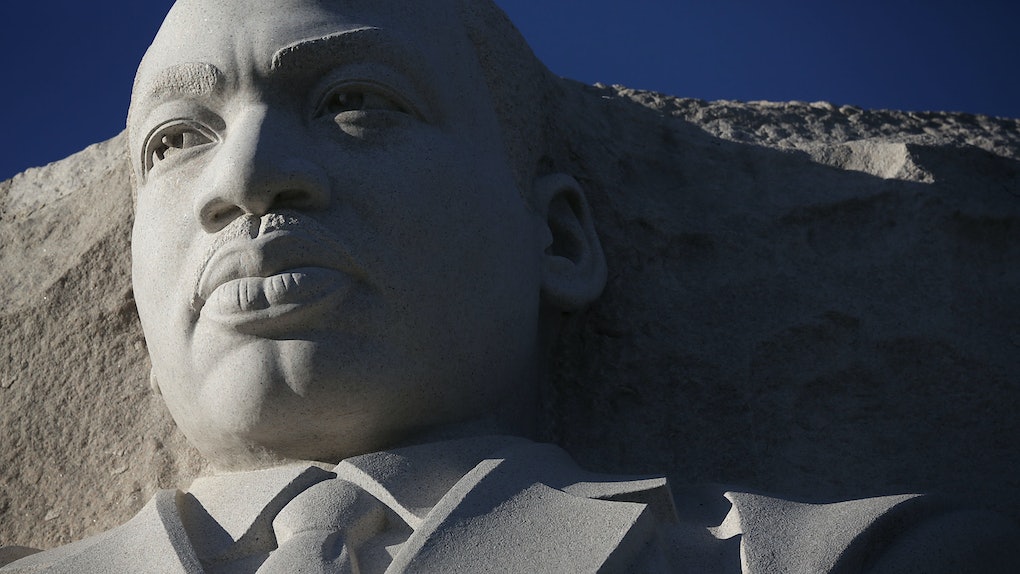 What Does MLK Jr. Day Represent? Here's What You Should Know About The Holiday

Martin Luther King Jr. was an Atlanta-born Baptist minister and civil rights activist, and he started his philanthropic fight for human rights in the mid '50s. As the determined face of the Southern Christian Leadership Conference, he fearlessly led several groundbreaking speeches with an undying goal to end racism and segregation — a major U.S. issue to this day.

MLK Jr. was a brave activist behind ending legal segregation of African-Americans in the U.S. In 1963, he delivered his famous "I have a dream" speech to a huge crowd of civil rights marchers around the Lincoln Memorial in Washington D.C. In 1964, he supported the Civil Rights Act, which ended segregation in public places. This was the same year MLK Jr. received the Nobel Peace Prize. The following year, in 1965, President Lyndon B. Johnson signed the Voting Rights Act, which protected African-Americans' right to vote.

In April 1968, MLK Jr. was assassinated by a gunman at a peaceful event in Memphis, Tennessee, where he led a march to support striking sanitation workers. As MLK Jr.'s death was truly devastating, countries around the world continued to view him as one of the single most inspirational and influential African-American leaders to this day.

After his death, Michigan Congressman John Conyers Jr. proposed to make MLK Jr.'s birthday — Jan. 15 — a national holiday. The King Memorial Center in Atlanta sponsored the first observance of the holiday in 1969, 15 years before it became a federal holiday. Before that, individual states — such as Illinois, Massachusetts, and Connecticut — passed their own state bills to celebrate Martin Luther King Jr.'s birthday.

Passing MLK Jr.'s birthday as a federal holiday led to immense controversy, according to TIME. Several Republican senators attempted to emphasize MLK's associations with communism, with the argument that any person opposing the holiday would automatically be dubbed a racist. However, President Ronald Reagan signed a bill in November 1983 to officially celebrate the holiday on every third Monday of January, starting in 1986.

I can remember every year back in elementary school when we would go to the library for a lesson on Black History Month, which was led by our school librarians. They told us the significance of MLK Jr. Day, and we learned a (slightly abridged) version of the civil rights movement. We also discussed the importance of racial equality. I was always left in awe when one of our librarians — an older black woman — recounted the story of MLK Jr.'s assassination, nearly in tears. I remember her quoting Coretta Scott King, saying, "this is not a black holiday; it is a people's holiday," and it stuck with me. I think about it every year.

Instead of taking your day off for granted, make sure to reflect on the holiday's importance and MLK Jr.'s accomplishments. And of course, think about what the holiday represents for human rights and black history. If you decide that you want to positively contribute to your community in honor of Mr. King Jr.'s benevolence, look into doing something philanthropic on MLK Jr. Day. It's beyond important to recognize and respect someone who so greatly contributed to our country, so make sure to honor him this MLK Jr. Day on Jan. 15.

Editor's note: This article has been updated to clarify several points.