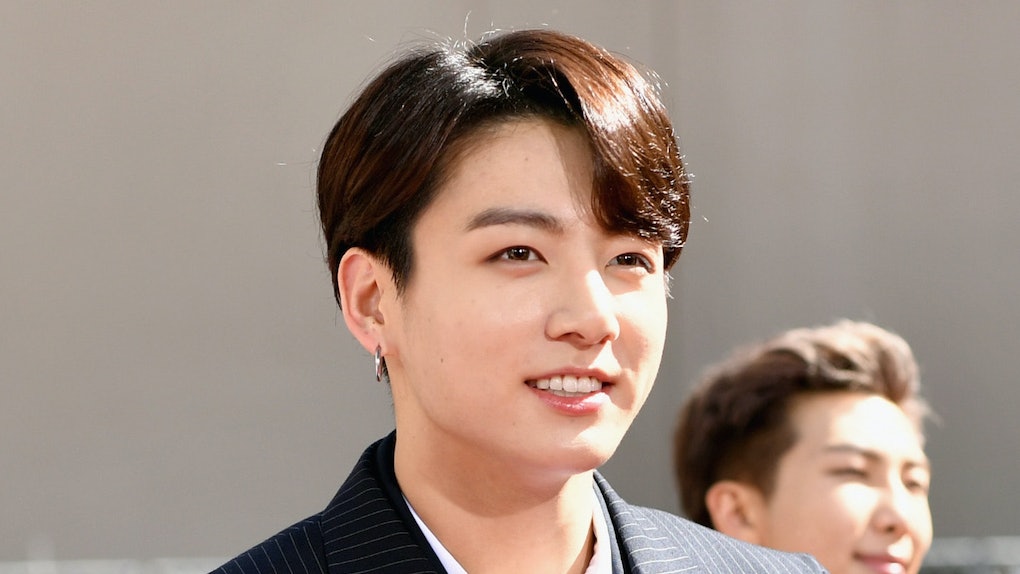 What Does BTS' Jungkook's "ARMY" Tattoo Mean? Fans Have A Theory

This is not a drill, ARMYs: I've got an update on Jungkook's tattoo! As you already know, Jungkook's tat is comprised of a ton of cute symbols, so there was already a lot of decoding to do from the moment fans spotted it. Now, based on the golden maknae's latest spotting, it looks like he may have added one more symbol to the bunch. If you are scratching your head and asking, "What does BTS' Jungkook's 'ARMY' tattoo mean?" then you've come to the right place. Let's unpack this together.

Jungkook's relatively new hand ink has been a hot topic of discussion ever since ARMYs caught a glimpse of it while the seven-member group made their way through Incheon International Airport in Korea on Sept. 16. If you recall, this appearance — however minor — was huge for ARMYs since the group was on a break from Aug. 11 to Sept. 15. Of course, this sighting was everything for ARMYs because they had patiently been waiting for BTS' return.

I'm sure fans were wondering how the band had changed over the month and what hair color each member would be sporting. So, you'd best believe eagle-eyed fans spotted Jungkook's new ink from a mile away. The beginnings of JK's tattoo technically made its first appearance in a photo Jimin posted for Jungkook's birthday on Sept. 1, but it was so faint, it's no wonder ARMYs missed it.

Up until today, Jungkook's tattoo featured "ARMY" written across his knuckles with plus signs in between, an emoji on one of his fingers, a "J" on another, a crown, a heart, and an unidentifiable illustration on his lower thumb near his wrist. Now, it looks like that tattoo has gotten even bigger with the new addition of the BTS logo. Fans spotted it in pictures of the group making their way through Incheon International Airport on Oct. 9 on their way to Saudi Arabia for their Love Yourself: Speak Yourself tour stop there.

The logo looks like an irregular hexagon with a line through it, which ARMYs recognize easily.

On its surface, it's obvious that Jungkook decided to personally shoutout his fans with his tattoo. Again, it consists of the word "ARMY" across (BTS' fandom name) and the new addition to the tat is clearly BTS' logo. Super straightforward.

Things get a little murkier when you consider all the symbols surrounding "ARMY."

According to a popular fan theory floating around on Twitter, the entire tattoo is a means of acknowledging the BTS fandom and Jungkook's relationship with his bandmates. Fans think each letter represents a member of the group. (The "A" with the line missing is an upside-down "V," the "R" and "M" is RM, the "Y" is Yoongi, and — seemingly adding weight to this theory — the random "J" was added to represent Jimin, J-Hope, and Jin.) The theory also holds that the plus symbols in between the letters of "ARMY" mean the group and their fans will always be together.

It's a super cool theory, especially considering there was a time when ARMYs wondered if Jungkook's "ARMY" tattoo — sans the new BTS logo — was real or not. See, some fans noted it appeared to be missing when Jungkook crashed J-Hope's Sept. 27 VLIVE and did the "Chicken Noodle Soup" dance.

But, to be fair, the video is blurry and Jungkook is dancing like he has ants in his pants, so there is a good chance the tiny tattoos were just too hard to spot. Of course, there are still fans who think the tattoo is temporary, but, for now, it looks like the ARMY tribute is not only alive and well, but growing. All I know for sure is that, if it turns out to be fake, I'll miss it when it's gone!