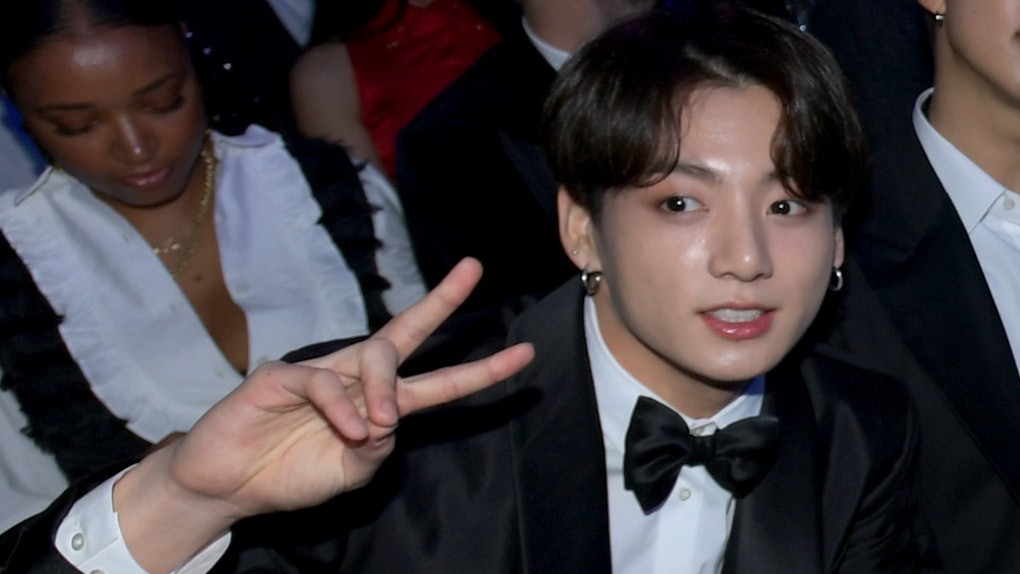 Attention ARMYs: If you haven't already downloaded the TikTok app, you're gonna wanna do it ASAP. Go ahead, I'll wait. Why? Because BTS just opened an account, y'all! You heard me. On Sept. 25, Big Hit rolled up to Twitter to announce that BTS' TikTok channel was live — and there are already two videos for us to swoon over. In the first, the boys threw out poses while "Boy With Luv" played in the background. In the second, RM yelled, "Our TikTok channel is finally open!" And in both clips, it looked like there was some kind of ink on JK's hand. So, is Jungkook's "ARMY" tattoo real? Because you can def kind of see it!

But let's back up for a sec. See, on Sept. 16, BTS was spotted at Incheon International Airport in Korea. At the time, a source from Big Hit explained that BTS had ended their period of rest and was flying out for a scheduled activity. Woot! Here's the thing, though. ARMY hadn't gotten a good look at the septet since the Lotte Duty Free Family concert back on Aug. 11 (outside of snapshots on Twitter), so it was mad exciting to see them — especially since they all looked so different from when fans last saw them. The most noticeable change in appearance was Jungkook's, who was now rocking much longer hair and what looked like some new ink on his right hand.

Considering how new ink can rile up ARMYs (I mean, can you blame them? Sa-woooon), it's no surprise Jungkook seemed to keep his right hand in his pocket while he made his way through the airport. But ARMYs are practically honorary members of the FBI. They spotted that tat from a mile away! They zoomed in on the vid and noticed that there was, indeed, a tattoo across Jungkook's knuckles, and that it read "ARMY." There was also a "J" tattooed above the "M" in ARMY and some other artwork on his hand (like an emoji, a crown, a heart, and an illustration on his lower thumb near his wrist).

So sweet! So cool! I mean, how amazing is it that if Junkook really did get a tattoo, he went and got one as a tribute to the massive BTS fandom? Could you even love him more?

Of course, Jungkook has not confirmed whether the ink is actually real. But in the TikTok videos posted on Sept. 25, you can still glimpse the tats on his hand.

So, tats are still there. The question is, are they real?

Well, there's always a chance the tats could be temporary. This wouldn't be the first time Jungkook got a henna tattoo. Remember when he got one of the "I love you" hand sign back in Oct. 2018 during Bon Voyage season three?

But I'm leaning toward the tattoo being real and I'll tell you why.

1) It appears to have been applied in stages.

If you zoom in really close into Jimin's birthday photo of Jungkook posted all the way back on Sept. 1, you can see the beginnings of the "ARMY" tattoo on his fingers, like the emoji on one of his fingers and the "A" on his first knuckle, but the plus signs between his knuckles and the illustration on his lower thumb are not visible.

That suggests that Jungkook got the tattoo in stages — which is something one might do when a tattoo takes a long time to complete or is painful, two things that seemingly would not be an issue if the tats were temporary. Then again, there is a possibility he just decided to get more temp tattoos after the first batch. But then there's the fact that —

2) All the tattoos appear to be intact.

Since it's been nearly a month since fans first caught a glimpse of Jungkook's sweet ARMY dedication and the ink is still there, I'm gonna go ahead and surmise that it's most likely real.

A henna tattoo can sometimes last up to three weeks, but considering Jungkook's tats are in a place that gets washed several times a day, I think it's unlikely that's the case here.

But real or temporary, Jungkook's fans are losing their minds about the whole thing over on Twitter:

"Jungkook finally growing out his hair, getting tattoos and just doing what he’s always wanted to do is the hottest thing," wrote one.

"Jungkook still got those hand tattoos so they ain't fake, I can now sleep in peace," wrote another.

"I still have a small moment everytime I remember Jungkook has tattoos," added third.

And from a fourth: "Jungkook's hand tattoos are THRIVING."

Real or not, I'm gonna have to go ahead and agree.

More like this
These Tweets About Jimmy Fallon's TikTok Dance Follow-Up Segment All Say It's Too Little, Too Late
By Brandy Robidoux
Lizzo's TikTok About DMing Chris Evans On Instagram Is Truly Hilarious
By Abby Monteil
Why Did Addison Rae Deactivate Her Twitter? Fans Think This Is The Reason
By Brandy Robidoux
Stay up to date