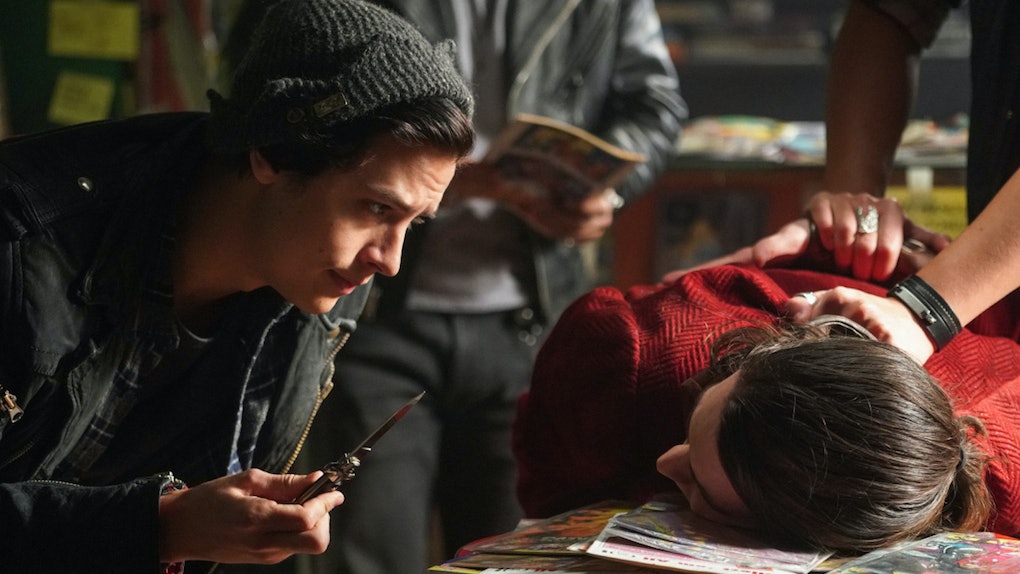 What Does Baby Teeth's Death Say About The Gargoyle King? 'Riverdale' Is Getting Weirder

Another Riverdale episode, another mysterious and occult murder. Just when fans had almost forgotten about the Gargoyle King and started to focus on the Farm, the branchy baddie reared his skeletal head once again. Spoiler alert: This post contains plot details from Riverdale Season 3 Episode 17, "The Raid." His latest victim was Archie's juvie buddy Baby Teeth... which raises a lot of questions. So, what does Baby Teeth's death say about the Gargoyle King? Let's go over what the latest Gargoyle King murder might reveal about Season 3's central mystery.

At the beginning of this week's new episode, Archie's friend from juvie Mad Dog informed him that Hiram Lodge's private prison (yes, the one from all the way back in Season 2) is now open, and that all the kids from juvie would be transferred there unless he can somehow stop it. Thankfully, Archie is not above blackmailing a mayor, and he's able to get all his juvie buds pardoned and set free with Veronica's help. Since they all have nowhere to go, Archie invites Mad Dog, Baby Teeth, and the rest of the juvie kids to stay at the abandoned gym that Hiram gave him. They start boxing for fun rather than being forced to, and also come together to help Jughead and the Serpents beat up the Gargoyle Gang and chase them out of Mad Dog's family's apartment building.

But sadly, Archie's reunion with his juvie buds is short-lived. Mad Dog decides to ignore Archie's advice and fight for Elio in order to make money to support his family, and Baby Teeth winds up on the wrong end of a Gryphons and Gargoyles mission card. One of the Gargoyle King's chalice's is found outside of Archie's gym, and in it is a quest card that reads "defang a wolf cub" and one of Baby Teeth's teeth.

As if that did not make it clear enough that Baby Teeth is dead now, FP Jones comes across the ex-con's dead body in the woods, in the same spot and position that Dilton Doiley and Ben Button's bodies were found in. Baby Teeth was prostrate in front of a Gargoyle King shrine, with blue-stained lips and the carving of a rune slashed onto his back.

But... why Baby Teeth? He was such a minor character that we had really only seen for a few minutes and knew basically nothing about. One thing that does seem telling, though, is that Baby Teeth was the target of a Gryphons and Gargoyles quest card, and not a suicide like all the rest of the Gargoyle King deaths up to this point. The only other person whom we have seen be the target of a quest card is Archie, although the validity of that card is in question since Hiram admitted he created multiple "kill the red paladin" cards. The only connection between Archie and Baby Teeth is the Leopold & Loeb Juvenile Detention Center.

Obviously, Hiram will be Archie and Jughead's lead suspect in Baby Teeth's death due to the card, but most Riverdale fans are pretty sure that something deeper than just Hiram Lodge is going on here. We will have to wait to see how this death shakes up the Gargoyle King investigation as the show continues.

More like this
Netflix's 'Bridgerton' Spinoff About Queen Charlotte Will Deliver So Much Royal Drama
By Cianna Garrison
Paramount+'s 'iCarly' Revival: Release Date, Cast, Trailer, & More
By Cianna Garrison
These Theories About Annabelle On 'Cruel Summer' Will Make You Think
By Rachel Varina
Stay up to date