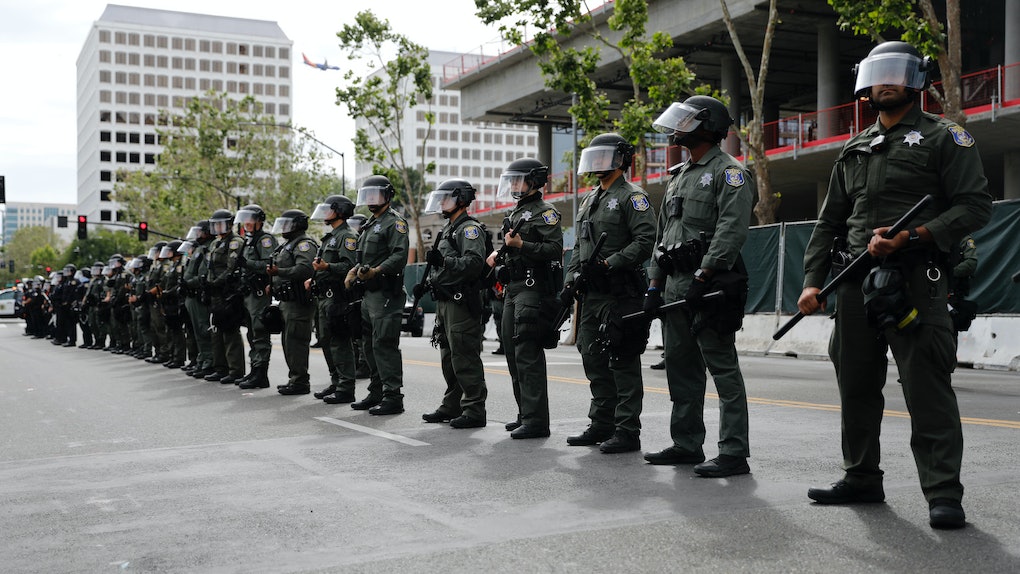 What Do Police Unions Do? There's A Lot To Unpack

As nationwide anti-racism protests continue, calls to defund police departments have brought renewed focus to law enforcement policies and the structures that protect officers. Amidst public pressure to defund police, one of the most powerful opposing factions are the police themselves — namely, the police unions which represent officers. The powerful organizations hold major political and financial clout, and are considered by police reform activists to be one of the biggest hurdles to enacting real change and holding officers accused of misconduct accountable for their actions.

At a surface level, police unions work like any other union, bargaining with the city on behalf of member officers for salaries, pensions, and health benefits, and generally advocating for their members. While only members pay union dues, even police officers who aren't officially part of the union can benefit from wage increases or improved benefits. However, police unions have been criticized for allegedly making it very difficult to remove officers accused of misconduct or to effectively discipline them, thanks to a number of tactics, including provisions written in union-negotiated contracts. “The elephant in the room with regard to police reform is the police union,” Minneapolis Mayor Jacob Fray told The New York Times in a June 2020 interview. He described them as a “nearly impenetrable barrier” to enacting real reform against racist and force-related complaints in police departments.

Stephen Rushin, a professor of Criminal Law, Evidence, and Police Accountability at Loyola University Chicago, analyzed 178 police union contracts around the U.S. in a 2017 article published in the Duke Law Journal and found that 88% had some sort of language that made it more difficult for superiors to hold police accountable for claims of misconduct. Some contracts included provisions placing time limits on the length of internal investigations, expunging records of alleged misconduct, and banning civilian oversight and anonymous complaints. When superiors do discipline officers accused of misconduct, by suspending or firing them, unions can use a number of different channels, including arbitration hearings, to get them reinstated. A 2017 Washington Post investigation found that between 2006 and 2017, nearly a quarter of officers fired for misconduct by the nation’s largest police departments had been rehired. Elite Daily reached out for comment on unions’ alleged roles in protecting officers accused of misconduct to the Fraternal Order of Police (FOP), the largest law enforcement officers’ organization in the United States; as well as the New York City Police Benevolent Association (NYCPBA), which represents officers in the New York City Police Department, the largest police department in the United States, but did not hear back.

Jennifer Shaw, the program officer for the left-wing think tank and grant foundation Open Society Foundation, works on issues of policing and the death penalty. She tells Elite Daily that police unions also often fund the campaigns of future elected officials, such as mayors, governors, city council members, and district attorneys, who end up with oversight of police departments. "Many elected officials depend on these donations and endorsements," she says. "They become beholden to the unions, and are less likely to support actions opposed by the unions." The FOP and NYCPBA did not immediately respond to requests for comment on police unions' political donations. According to The New York Times, one unspecified New York City police union has spent over $1 million on various races over the past six years. Meanwhile, The Los Angeles Times reported that over the past decade, the Los Angeles Police Department (LAPD)’s union has spent millions of dollars on lobbying in both an unofficial and official capacity. In 2013 alone, the LAPD union donated more than a million dollars to a candidate in that year’s race for mayor. Elite Daily reached out to the union involved, the Los Angeles Police Protective League (LAPPL), for comment on the reported donations, as well as how political donations such as these may influence elected leaders, but did not hear back by the time of publication. In Los Angeles, the mayor is responsible for appointing the Board of Police Commissioners, which is in turn responsible for setting overall police policy. According to The Guardian, in a late 2019 letter circulated by the Los Angeles County's Professional Peace Officers Association (PPOA), president Tab Rhodes asked its 8,000 members for $2 million in donations to “establish collaborative relationships” with state legislation.

As a result of these lobbying efforts and bargaining, police unions have been able to promote policies centered around less regulation while allegedly using their political clout to shield officers accused of misconduct from outside scrutiny. "Police union contracts may require the destruction of discipline records after 2 years or allow officers to wait for a week or, in some states, 30 days, before submitting to an interview during an active investigation after a non-lethal or lethal shooting," Shaw says. "Over the years, these contract provisions tie the hands of any police chief seeking to hold officers accountable for misconduct."

In many areas, the relationship between police and local officials can be troubling. In St. Louis, Missouri in October 2017, the city's first Black prosecutor, Kim Gardner, proposed a separate unit in the prosecutor’s office that would independently investigate alleged police misconduct, according to The New York Times. While her proposal initially enjoyed widespread support from city lawmakers, the local union was able to shelve the proposal while hiring a lawyer who fought to limit her scope in looking into police misconduct. Gardner has since accused the St. Louis police department of retribution, and is suing them and the city for allegedly failing to launch a timely investigation into some threatening letters she reportedly received during a prosecution case, according to NPR. The St. Louis Police Department declined to comment to Elite Daily about Gardner’s lawsuit and claims against the department, saying the department does not comment on pending litigation. Meanwhile, city officials in other areas, like New York City Mayor Bill DeBlasio have refused to outwardly condemn the NYPD for apparent misconduct, including a video that appears to show officers driving a squad car into a crowd of peaceful protesters in May 2020. As of June 2, the NYPD was investigating the incident, and no officers have been publicly charged. Other officials, like New York Governor Andrew Cuomo, have walked back statements about cutting back on police budgets in an attempt not to seem “soft” on crime.

Even when more restrictive policies governing police use of force are mandated, advocates and experts have alleged union heads may signal to their rank-and-file officers that they don't need to follow them — which supporters of defunding the police have argued is one reason why implementing measures such as banning chokeholds and installing body cams don't go far enough. The FOP did not respond to Elite Daily’s request for comment on allegations that union heads may have disregarded existing use of force reforms.

When department heads do discipline officers for misconduct, officers can also turn to unions for legal help, including arbitration hearings, which often take place behind closed doors. Shaw says that in many cities, officers can appeal to a civil service review board or another administrative appellate body if they're not happy with a police chief's disciplinary action. If this organization decides to rule against the chief's decision, the police department is usually required to reinstate the officer, sometimes with back pay. In 2014, Pittsburgh Public Safety Director Mike Huss told The Pittsburgh City Paper that 70% of officers fired by the city were reinstated by an arbitrator from 2009 to 2013.

While Shaw says that there are no measures in place where the public can directly influence the decisions of police unions, constituents can put pressure on politicians to hold police unions and, thus, their officers, accountable. For example, in 2015, police disciplinary records were only public in 12 states. As a result of recent scrutiny of police brutality, states like California and New York, in 2018 and 2020, respectively, have moved to allow access to records in an effort to create more transparency. While more states have moved towards allowing the public to access disciplinary records, there can still be significant barriers to accessing them or degrees of how public they are.

Shaw also says that the leadership in police unions, which is often not representative of its constituents, can serve as roadblocks for instituting real change, even if the officers themselves want it. "The problem is that police union leadership tends to be older, sometimes even retired, more white and more male than the police department as a whole," she says. According to The Marshall Project, out of the 15 largest union departments in which a majority of members are people of color, only one had a Black union leader as of June 2020. Shaw urges union members to vote out leadership if they want to see change. "These union leaders often have years of seniority and lots of political power within their union and department."

Although changes are being made, Shaw says there is still a long way to go. "Police unions understand that reducing the police budget will result in the reduction in police officers who are dues-paying police union members," Shaw says. "Unions can be expected to use every tool available — political power, labor laws, and the fear-mongering language such as claims that defunding the police will lead to a rapid rise in violent crime."