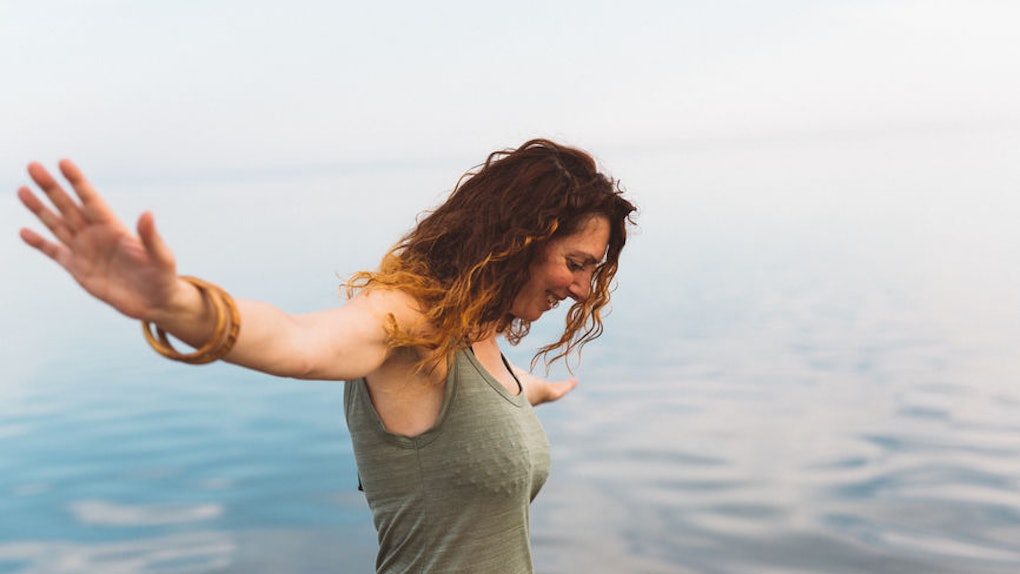 What Do Dreams About Flying Mean? The Sky's The Limit When It Comes To Dream Interpretation

Have you ever been walking, maybe in your hometown, when suddenly you feel the air between your feet and the ground? You look down and notice you’re floating — wait, no, you’re flying. It’s a bird, it’s a plane, it’s YOU! You're literally soaring. You’ll never have to pay for air travel again! And then, you wake up — just before free-falling from the sky. It was only a dream, but it felt so real. As you rise from your slumber, you can't shake your weightless fantasy, and you spend most of your day wondering what dreams about flying actually mean — you know, for your grounded, IRL self now that you're awake.

Flying dreams are common lucid dreams, meaning you become aware that you’re dreaming in that moment. In this type of dream, you may even be able to control the characters, environment, or narrative (like, Inception-style). However, this isn’t necessary for a dream to be lucid. According to research published in the scientific journal PLOS One, lucid dreaming usually happens during the REM (rapid eye moment) phase of sleep, aka one of the deepest stages of your overall sleep cycle. Lucid dreams can happen spontaneously, and some people can even train themselves to dream lucidly.

Generally speaking, lucid dreams are super complicated to understand, but make no mistake, they've been a thing for a long, long time. Per the book Conscious Mind, Sleeping Brain: Perspectives on Lucid Dreaming, the first recorded lucid dream came from ancient Greek philosopher Aristotle, who described the experience in an essay titled On Dreams as something that really does challenge your ability to recognize whether you're awake or asleep, in almost any given moment.

More recently, though, a 2014 study published in The American Journal of Psychology found that over 83 percent of 684 surveyed participants said that they experienced lucid dreams during their adolescent years. These dreams were about 14 minutes on average, the research found, and they usually involved having sex, talking with other dream characters, and yes, flying.

Dreams about flying, whether they're lucid or non-lucid, could mean a couple of different things. Both Sigmund Freud and Carl Jung — renowned psychologists who analyzed dreams as part of their research — seemed to agree that all dreams represent unfulfilled desires of some kind, though the two experts had a tendency to disagree on what those unfulfilled desires actually were or how they should be addressed.

According to the Classics in the History of Psychology project from York University in Toronto, Ontario, Freud, in classic Freudian fashion, thought dreams about flying were due to nocturnal erections for men, which would then, I guess, explain why men feel like they are “overcoming gravity” in these types of dreams.

Psychotherapist Jeffrey Sumber agrees with Freud that flying dreams tend to be a dude thing, but from his perspective, it has nothing to do with erections. Back in 2011, Sumber told HuffPost that, while flying dreams are usually more common for men than for women, they often represent a man's desire to break free from life’s pressures. "Usually, they occur when we are dealing with issues of freedom, momentum or a lack thereof," he explained. "These dreams can be purely informational in the sense that they highlight an experience we are having, but have not yet been conscious of."

Of course, that's just one interpretation, and when it comes to dreams, there are tons of ways to interpret them, and there's very rarely one "right" answer. Having said that, according to certified dream analyst and dream expert to the stars, Lauri Loewenberg, both men and women can experience flying dreams on the reg, and from her perspective, they can actually, in a sense, represent good fortune. “[It can mean] something in your waking life is going really well," she tells Elite Daily. "Typically, the message of this dream is: Things are great right now; the sky is the limit. Keep doing what you're doing.”

If Lowenberg's interpretation feels like it doesn't quite apply to you, she suggests asking yourself questions like, “What is lifting your spirits right now? Are you realizing a high goal you have set for yourself? Do you have really high hopes for anything in particular? Are you reaching a higher level of status, a higher level in career, or a higher level of spirituality? Have you recently broken free from something that had been weighing you down?” In other words, challenge yourself to think outside the box a little in terms of what "flying" and being "weightless" could really mean in your own waking life.

Psychologist and dream expert Ian Wallace also thinks flying dreams can be a sign of something positive in your real life. He told The Telegraph in 2016 that dreams that involve flying often mean you’re letting go of a burden of some kind, which can then lead to “the opportunity for your imagination to take flight and get a particular plan or idea off the ground." Wallace explained, "You realize you have the opportunity to rise to the challenge and liberate yourself from a situation that may have been weighing you down.”

Whether your flying dreams are lucid or not, all dreams are subjective, and it really depends on who you are and what's going on in your life when it comes to interpreting these nighttime visions. Maybe, as Sumber's interpretation suggests, you've been playing Queen's "I Want to Break Free" on repeat because all you want in your real, waking life is to rise above certain pressures that you feel are weighing you down. Or perhaps you're feelin' Lowenberg and Wallace's analyses more: You're crushing it IRL right now, and you're rising to the challenges that once held you back. Or maybe you've simply trained yourself to have lucid flying dreams, for no other reason than because you just like the way it feels.

Bottom line: These analyses are just tools, and the only person who can really tell you what your dreams mean, is you.