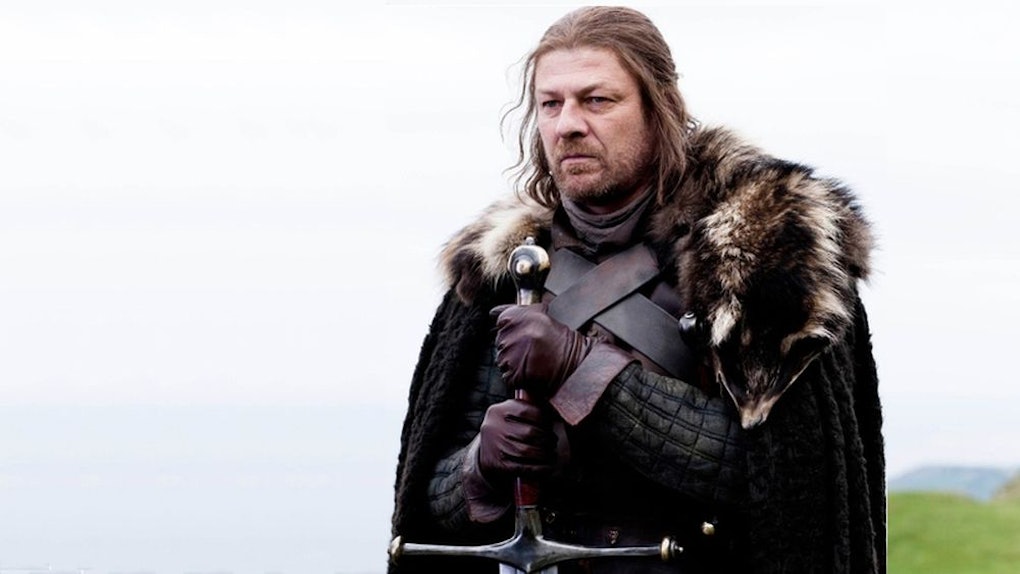 What Did Ned Stark Whisper Before He Was Killed On 'Game Of Thrones'? We Finally Know

There are some Game of Thrones mysteries in Westeros that will never be solved, no matter how far the show outpaces the books. Why is Ramsay Snow so evil? Did Tywin Lannister know about Rhaegar's annulment? But there are some mysteries that date back to Season 1, which never should have been mysteries — it's just that fans didn't know what was a clue and what wasn't. The biggest of these is what Ned Stark whispered on Game of Thrones just before he died.

Some have thought it would be a confession of Jon Snow's parentage. (After all, it's not like Illyn Payne, the executioner, could tell anyone... he has no tongue.) Others thought he might be whispering his sister's name, or "I kept my promise," in that he never revealed the truth of Jon's father. Maybe he was whispering Sansa or Arya's names, in hopes that Payne might help them escape. Theories have abounded throughout the series, in hopes that perhaps one day we would find out, maybe through Bran Stark's Three-Eyed Crow abilities. (Personally, I was hoping for it to be "Hail Hydra.")

But so far, Bran hasn't heard what his father whispered, despite having seen Ned beheaded in multiple visions. That's because, according to Sean Bean, who played Ned Stark, what Ned whispered wasn't actually of any importance.

Talking to HuffPost, Sean Bean revealed that all he was whispering was a little prayer, not unlike most people who are executed in broad daylight. He agrees "it appears" to be something important, but in fact, not so much.

In fact, Ned Stark is a fairly religious man in the books. He believes in the Old Gods, the kind of deities that stretch back to the time of the Children. That's back when greenseers who used trees to see through time and space were not confined to far beyond the Wall. Those gifted like Bran were simply part of the culture.

So Bean's choice to have Ned pray during his final moments would actually be something Bran would hear. Or, more correctly, the Three-Eyed Raven before him would have heard. It would be a prayer for mercy and grace.

That's what Bean was going for:

It’s quite subtle in that many people wouldn’t pick it up. It was an interesting thing to do for me at that point. There’s not much you can do really, you’ve got your head on a block. That’s about the only thing you can do is murmur.

Except it did not occur to Bean (or to a lot of the actors involved in Season 1 of Game of Thrones) how completely insane the fans are. Even the most subtle prayer for a quick death can spawn thousands of fan theories before the truth can even get a pair of shoes on.

As for Ned Stark maybe having some sort of cameo in the final season, Bean gets these questions every year and fields them graceful. When asked if the showrunners ever said there was a chance to come back he demurs: "No, they’ve never said that."

And yeah, I’ve heard rumors, but not from very good sources that I might be back. But I think I’ve done my time there, and I created a good character. It’d be rather strange to see him resurrected.

With only six episodes to wrap up the story, it's not like there's a lot of room, anyway. Game of Thrones' final season will premiere on HBO in 2019.

More like this
This 2021 'Game Of Thrones' Season 8 Trailer Is So Confusing... & So Good
By Ani Bundel
Here's How To Vote For The Next 'American Horror Story' Theme Among 6 Options
By Cianna Garrison
This Reported Update About HBO Max's 2021 'Friends' Reunion Is Great News
By Cianna Garrison
Stay up to date