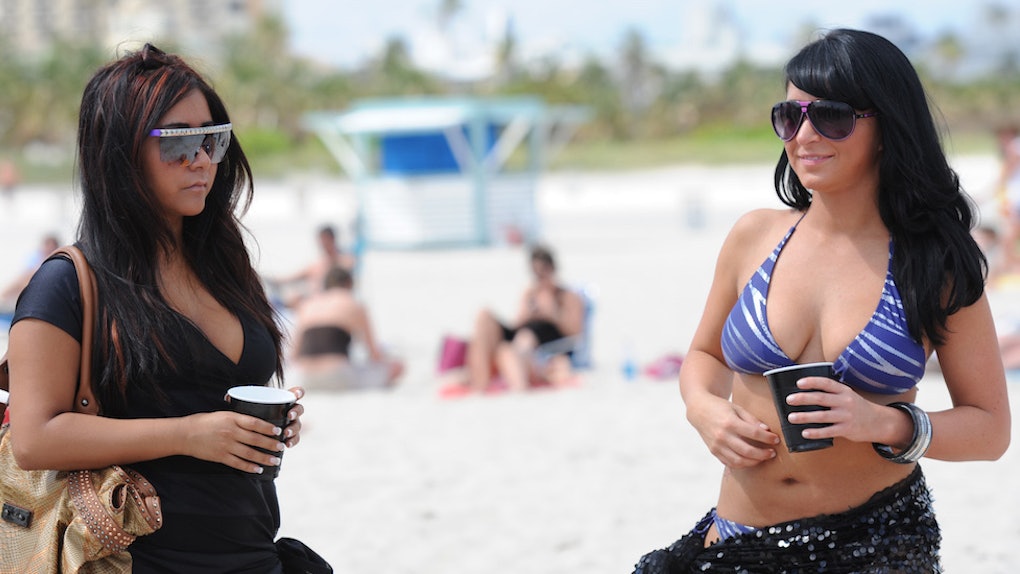 What Did Angelina Say In The Article About Snooki? Here's What Started The Drama

The Staten Island ferry has officially docked in Miami, and with Angelina's return to Jersey Shore family on Thursday night's Jersey Shore Family Vacation, the controversial castmate brought a ton of drama with her. Although she managed to smooth things over with the guys pretty easily, Snooki and JWoww were not ready to forgive Angelina for all of their past fights. In particular, Snooki was especially upset about a tabloid interview that Angelina gave shortly before Family Vacation began filming. So, what did Angelina say about Snooki in that article that made Snooki so mad? Get the full scoop on what their beef was about right here.

The article in question that caused most of Snooki and Angelina's initial fighting was published by the tabloid In Touch back in September of 2016. In the interview, Angelina criticizes Snooki's lip injections, accusing the Jersey Shore star of trying to copy her look. She goes on to say that she does not think Snooki looks much different with her new lips, whereas she herself looks completely different after her injections. You can read the full quote below:

She's trying to copy my look. It’s funny how she goes and gets her lips done at the same exact place that I got mine done. Yeah, so now all the times on [Jersey Shore] she used to call me ugly, now she’s trying to look like me ... I don’t really think [the new lips] are doing much for her to be honest with you. I don’t know what the hell that's about but, whatever. But with me, I look totally different with it, you know?

Back when that In Touch interview was published, it sparked a brief Twitter feud between Snooki and Angelina. Snooki saw the story and wrote that she was disappointed in Angelina for talking after reading the article.

Snooki went on to accuse Angelina of "talking crap" about her, but Angelina defended herself by saying that she has tried to be cool with Snooki for years since her stint on Jersey Shore ended and just wants to move on.

It may have seemed like the drama about that lip injections interview ended there, but Thursday night's latest episode of Jersey Shore Family Vacation proved that Snooki had not forgotten about the blow-up. When Angelina surprised everyone by turning up in the Family Vacation shore house, it was immediately clear that Snooki and JWoww were the most upset by her presence. While Angelina professed that she had changed her ways since her incendiary time on the first two seasons of Jersey Shore, Snooki was not having it, pointing to the In Touch interview as proof that she was still dissing her castmates in the media.

While Snooki and Angelina continue to fight about what was actually said in that article (Snooki claims Angelina called her ugly, but Angelina says she never did), it becomes clear that the Jersey Shore Family Vacation cast must be cut off from the Internet and cannot actually pull up the article in question to try to clear this up. When they get to the bar, though, Snooki quickly commandeers a waitress's cell phone and pulls up interview. After re-reading Angelina's full quote (from above), Snooki judges that Angelina was not actually being as mean as she had thought, although did find the wording to be a bit shady.

But after all that fighting, it surprisingly winds up being a happy ending between Snooki and Angelina. The formerly feuding pair get wasted together and decide to move on from their past drama. Now, let's just hope that actually can last!

More like this
TikTok's #NotTheMainCharacter Trend Shows The Supporting Role You Connect With Most
By Marisa Casciano
HBO Max's 2021 'Friends' Reunion: Teaser, Release Date, Guest Stars, & More
By Ani Bundel
These Theories About Annabelle On 'Cruel Summer' Will Make You Think
By Rachel Varina
Stay up to date