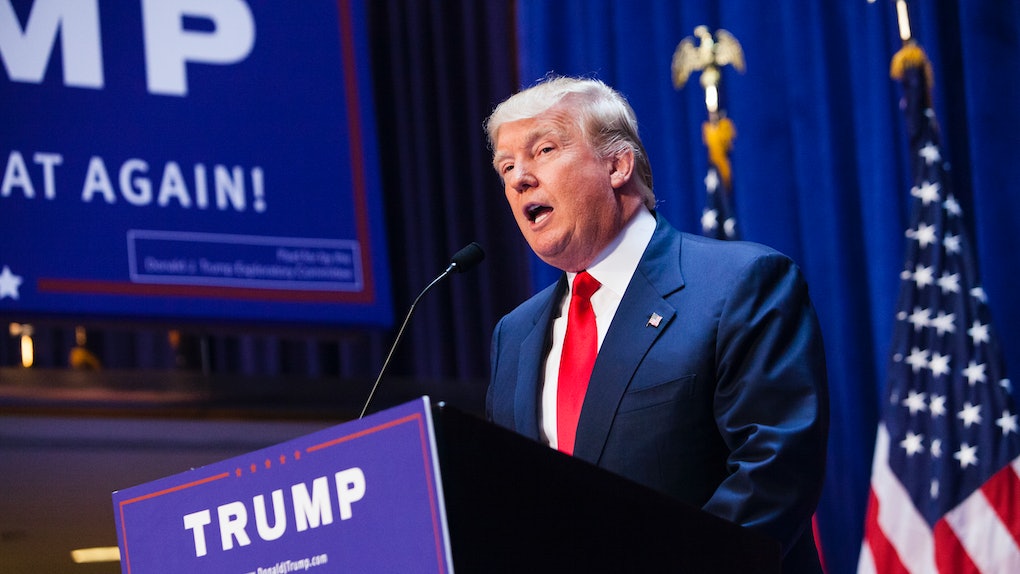 What Are Trump's New Restrictions On Asylum Seekers? This Would Add A Burden

In the memo sent to Barr and McAleenan, who has taken over as replacement for former Department of Homeland Security (DHS) head Kirstjen Nielsen, Trump called for officials to collect a fee from asylum seekers who are filing their asylum claims and applying for work permits. Though there are currently no estimates on what the fees will be, the memo instructs that the "fee for an asylum application not to exceed the costs of adjudicating the application." Trump also moved to prevent migrants entering the U.S. without proper documentation from receiving work permits until they've been issued protection. According to BBC, under the current asylum laws, asylum seekers who enter the U.S. both with or without proper documentation are eligible to work while their claims are processed, a process that can take months or even years. The White House did not immediately respond to Elite Daily's request for comment on the change in policy.

Abed A. Ayoub, National Legal & Policy Director for the American-Arab Anti-Discrimination Committee (ADC), noted in a tweet that without the ability to find work, asylum-seekers might not be able to pay the fee associated with processing their applications. Others, like 2020 Democratic candidate Julián Castro, outright denounced the fee policy. After the news of enhanced restrictions broke, Castro tweeted, "Families are fleeing violence and turmoil to seek refuge at our borders and Donald Trump wants to charge them a fee to gain asylum. Truly sickening."

The memo also calls for officials to make a decision about all asylum applications within 180 days. According to a fact sheet from the National Immigration Forum, an organization that advocates for immigrant rights, the length of the asylum process is already supposed to take 180 days under the Immigration and Nationality Act but de facto can take between six months and several years because of the backlog of applications. According to The New York Times, there are currently around 800,000 pending asylum applications. The memo didn't suggest how to deal with the backlog of cases.

Though the restrictions outlined by Trump won't take place immediately, the memo calls for the attorney general and the secretary of Homeland Security to propose regulations within 90 days that would enforce the new asylum rules.

Immigration has been a major policy focus during the Trump administration, and the administration has frequently been criticized for what some have seen as cruel or inhumane policies. In 2018, the administration caused an uproar with its "zero tolerance" policy which resulted in thousands of migrant children being separated from their families, for weeks or even months. Public outcry eventually prompted Trump to sign an order to keep families together. The administration has at various times also pushed to close the U.S.-Mexico border in response to migrants, defended the use of tear gas on migrants including children at the border, and added limits to the types of violence which would allow an asylum seeker to qualify for protection. According to the International Rescue Committee (IRC), an organization that responds to humanitarian crises internationally, the Trump administration has been consistently creating and encouraging policies that make seeking asylum more difficult in certain cases, in what it calls a "depart[ure] from decades of precedent." The White House did not immediately respond to Elite Daily's request for comment on the matter.

The new regulations around Trump's rules, if the 90 day restriction is followed, are slated to be rolled out around the end of July or the beginning of August. Stay tuned.

More like this
The More Contagious B-117 COVID Variant Is Now The Most Common Strain In The U.S.
By Rhyma Castillo
These Memes About "Putting Back" The Ever Given In The Suez Canal Are Everything You're Feeling
By Rhyma Castillo
Ivanka Trump's Women's Initiative Failed Inspection, & It's A Mess
By Rhyma Castillo
Stay up to date