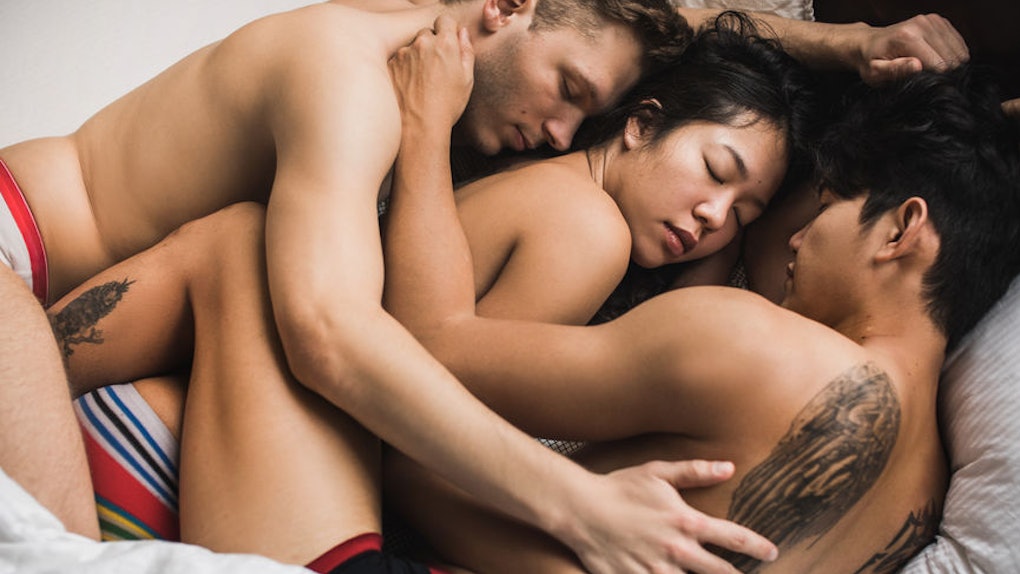 As someone who never learned about them in sex ed, never saw them played out in movies or on TV (except for that one low-key sad episode of Entourage), and doesn't have any friends who have had them, how am I supposed to know what they're like? Well, luckily, a recent Reddit AskWomen thread is here to clear some things up. In the thread, ladies share their own personal experiences with having threesomes, and here, I share their best, most informative responses with you. Go forth and learn, my people!

It was fine but it wasn't great.

So we did, at my apartment. She knew that I was basically straight, and I was mostly the recipient of attentions during the deed. It was ... fine? I had a little freakout after the left, didn't feel comfortable sleeping in my own bed that night for whatever reason. We never did it again.

They plan on doing it again.

It turned out great and we plan to do it again.

It was one of the biggest highlights of her sex life.

I’ve had several threesomes. None of them happened randomly, and the best ones with with my husband and our ex boyfriend. We were all into each other and it felt very fun and natural. I consider these threesomes one of the biggest highlights of my sex life, and I’d jump at the chance to do it again

Doing it with someone you're in a relationship with can provide difficulties.

It all depends on how you feel about your partner.

I've been in many--as a couple with a third, as a third, and as just three people having fun. I'm bisexual and keenly, keenly into group sex. I'm both a voyeur and an exhibitionist (but only if consent is involved in all directions--I don't want to have sex in public where strangers who are not actively interested in watching are unpleasantly surprised), so group sex is an ideal situation for me. Obviously being bisexual is different than it would be for straight people--straight people usually only enjoy group stuff if they're the focus of attention from two people of their preferred gender, or if they're a voyeur and are enjoying spoiling their partner with someone else. With gay people, well, you don't have the sexuality hiccup at least, if it's a group of lesbians or gay men.

But for the "as a couple how do you share" part of your question, it's partially because I'm wildly confident in my sexual prowess, and not in the least possessive. I don't think possessiveness is a healthy trait. Which doesn't mean I think everyone should be having group sex, heh, that's stupid, but, I do wish fewer people felt like they had some sort of "ownership" of their partner.

There was no awkwardness or jealousy.

It was spontaneous, not discussed beforehand at all with a female friend of mine and my male partner. We were drunk, she and I flirted often and it just happened.

Everyone says this is not the way to do it, but we were fine and had a good time. No hurt feelings, no awkwardness, no jealousy. I’m no longer friends with her but for entirely separate reasons.

OK, you're welcome for that quick little Part II to your high school sex ed class. Carry on!