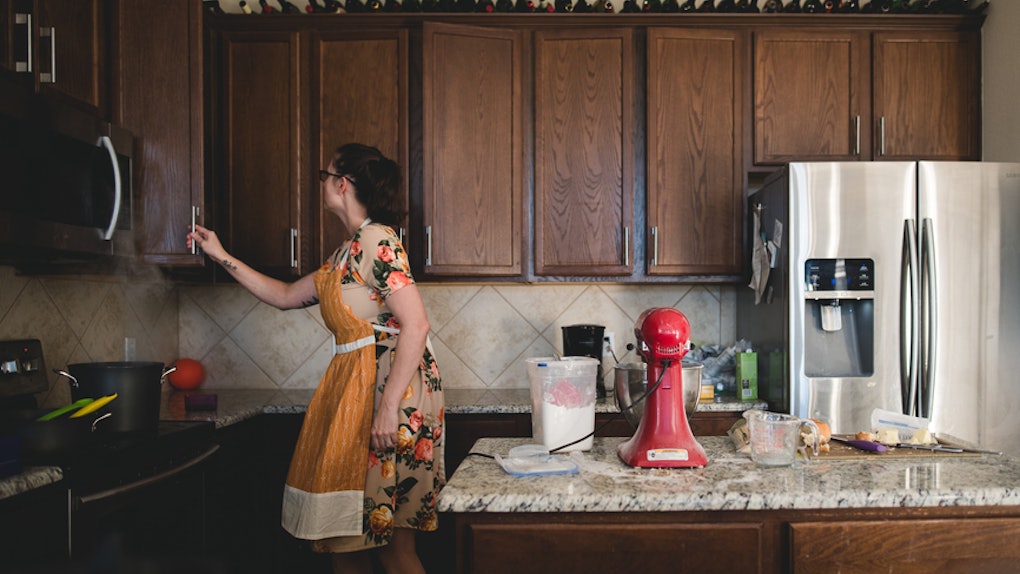 What Are Pantry Pests? They May Be Living In Your Kitchen, So Here's What You Need To Do

When you think about your hygiene, your mind probably wanders to germs. You think about cleaning the bathroom, washing your hands, and maybe bleaching the kitchen counters — but do you even know what pantry pests are, let alone worry about them? As it turns out, germs might be the absolute least of your worries when it comes to cleaning your kitchen. Instead, you might want to spend a little bit more time thwarting those itty bitty insects that are taking up residence in your cabinets.

According to the Penn State College of Agricultural Sciences, pantry pests are insects that "attack" foods that are tucked away in your cabinets, such as flour, cereals, herbs, spices, chocolate, and more.

But how do those creepy little intruders actually get in there? Well, the answer is kind of disturbing: They might come in from the outdoors, but according to Penn State, most of them are brought into your house already inside the food products you're stocking up on. Yuck.

Unfortunately, pantry pests are pretty difficult to spot with the human eye, which makes it all the more appalling. So yes, if you're thinking what I'm thinking, you're probably right: You've most likely already swallowed a pantry pest or two in your lifetime.

But before you throw out literally everything in your kitchen, consider this: Pantry pests are more likely to be in spices than anything else.

The most common foods for housing pantry pests, according to the Huffington Post, are spices like paprika, cayenne pepper, and chili powder — aka pretty much any pepper-based spice you've got in your cabinets.

The reason why pantry pests seem to love spices more than anything else in your kitchen is pretty interesting. Jody Green, a board-certified entomologist at the Nebraska Extension in Lancaster County, told the Huffington Post that spices are super rich in minerals and vitamins, "and paprika and cayenne have high prevalence of insect filth compared to other imported spices." Basically, Green explained, these pepper spices can provide insects with a hospitable environment to thrive in, because they contain the nutrients necessary for beetles to survive (even when the peppers are dried out and crushed) for long periods of time.

The most common pantry pests, according to HuffPost, are the drugstore beetle and the cigarette beetle. Great names, right?

The drugstore beetle is a small, oval-shaped insect that's approximately 2 millimeters long and brown in color. So, yeah, it's going to be pretty hard to spot when you're sifting through a bowl of brown rice. The cigarette beetle is a similar size, light brown in color, and got its name for its history of eating into stored tobacco containers. Yum!

Of course, to a certain extent, these pantry pests are kind of unavoidable. No matter how spotless your kitchen is, you still have to purchase food externally and bring it inside, and it's simply inevitable that you might bring a little insect friend home every once in a while.

Even though it's kind of yucky to think about, you can take some comfort in the fact that these bugs don't really pose any danger for your health. According to the pest control service Rose Pest Solutions, pantry pests don't carry or spread diseases, or anything like that, so if you do accidentally ingest one, there's no reason to panic. Honestly, you probably won't even notice them at all if you do eat them.

If you're one of the lucky ones who spots a pantry pest in your food, you should obviously throw it away, but before you do so, be sure to take a closer look at the package that the food came from. Also, keep in mind that pantry pests, like most insects, flourish in warm and humid conditions, according to the Food Network. In other words, it's more likely that you'll spot these little guys in the summertime than during any other season, so keep an eye out as the seasons start to change.

What you don't want to happen is for the insects to flourish and breed in your food, as infestations can happen really quickly.

For this reason, you should always rotate the products in your pantry, Green explained to Huffington Post. Use your oldest products first, and inspect them closely before throwing them into the frying pan.

And, like I said, worst comes to worst, you eat a tiny, microscopic bug. It's gross, sure, but it's not the end of the world, guys.