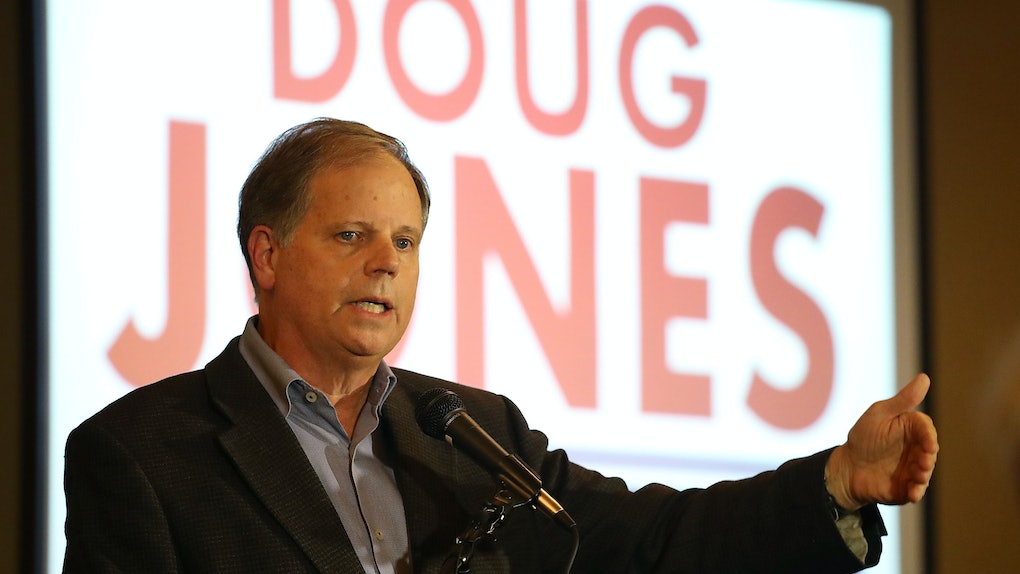 What Are Doug Jones' Stances? The Democrat Is Trying To Turn Alabama Blue

On Dec. 12, Alabama will vote in a special election, electing a new senator to represent a state whose roots run deeply red. On the one hand you've got Republican candidate Roy Moore, who has the endorsement of the president, but has received national attention after facing allegations for pursuing teenage girls when he was in his 30s. (Moore has largely denied allegations of wrongdoing.) On the other hand, there's Democratic candidate Doug Jones, who has never held political office, but has a chance of changing Alabama's historically Republican seat for the first time since 1992. Here's what you need to know about Doug Jones, the Democrat who may turn Alabama blue.

In 1997, Jones was appointed as the United States attorney for a Birmingham, Alabama district by Bill Clinton. He was the lead prosecutor in the historic 2002 lawsuit against two Ku Klux Klan (KKK) members for the 1963 bombing of a Baptist church in Birmingham, in which four African-American girls were killed. He was also apart of the prosecution of Eric Rudolph, who attacked a Birmingham abortion clinic in 1998, killing one person, according to CNN.

The Democrat is pro-abortion and has said, "I fully support a woman's freedom to choose what happens to her own body," according to WBHM. On the overall issue of health care, Jones has said that former President Barack Obama's Affordable Care Act needs improvements, but should not be eliminated altogether. According to his website, Jones said that "Health care is a right, not a privilege limited to the wealthy and those with jobs that provide coverage."

During an interview with MSNBC in September, Jones described himself as "a Second Amendment guy," while asserting that there should be "limitations" and background checks to the process by which people obtain guns. This less polarizing stance is despite the fact that President Donald Trump said he would be "bad for the Second Amendment."

If Jones, who has raised less than $300,000 in campaign funds, wins, it would likely cause controversy in the GOP-dominated state. Jones and Moore have alternated between leading the polls this past month, swinging in Jones' favor initially after allegations against Moore surfaced on Nov. 9. Since then, polls have indicated Moore with a 3 point lead ahead of Jones. This may be because many Republican leaders, including the president, have publicly endorsed him and have supported Moore's denial of the allegations.

Another reason polls may be letting Jones down is because of recent media criticism of Jones' campaign flyers. The Root published an article criticizing a flyer that read, "Think if a black man went after high school girls anyone would try to make him senator?" Clearly, he's making a statement about racial inequality in hopes of attracting black voters in Alabama, but the message didn't translate so well.

According to the U.S. Census, Alabama’s voting-age population is 26 percent black, and in this particular special election, African-American voters are expected to have a major affect on the outcome. If Jones can swing the black vote in Alabama, he may have a chance at winning, according to The Washington Post. However, many African-American voters in Alabama have expressed concerns for both candidates.

There's less than a week until the special election, and either candidate's success will bring a great deal of controversy. If Moore wins, then a national debate will be sparked about a senator being elected into office in the midst of sexual misconduct allegations. If Jones wins, then Alabama will break a 25-year record of being a red state. Either way, it's a race to pay close attention to as it approaches.