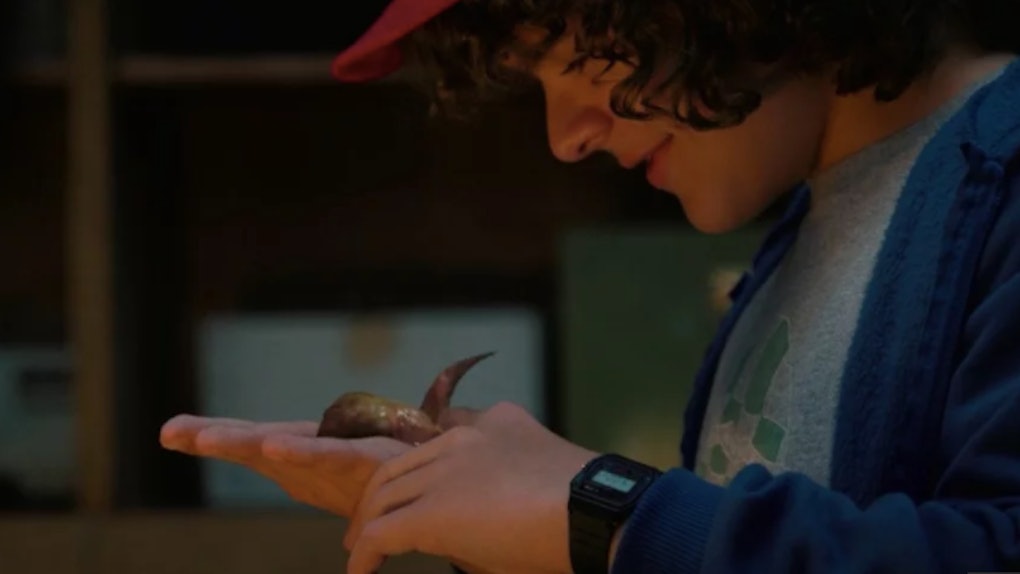 What Are Demodogs On 'Stranger Things'? Here's Everything To Know About Season 2's New Creatures

*Warning: This post contains spoilers for Stranger Things 2, read on at your own risk.* OK, Stranger Things 2 is officially out and I have a lot of very important and not at all irrelevant questions for the Duffer Brothers. First of all, WHY did Mews have to die? Secondly, is Steve going to get his own Babysitter's Club spinoff anytime soon? And finally, perhaps most importantly, what are Demodogs? The sketchy little demon monsters have been giving me nightmares since the premiere of Season 2 and I need answers.

If you're a Stranger Things fan, then you're well aware of the danger that Demodogs posed to Hawkins in Season 2; indeed, it was very similar to the danger posed by the OG Demogorgon in Season 1. They run amuck all over the damn place, terrorize everyone and kill Joyce's poor, helpless boyfriend Bob. The chief Demodog, Dart, started out as a cute(ish) little slug thing, but he and his brethren became anything but cute by the season's end.

Though these Demodogs are like the Demogorgon in the sense that they're products of the Upside Down and hungry for human flesh, they're not quite the same as the creature that kidnapped Will and wreaked havoc in Hawkins in Season 1, so the question remains: What exactly are Demodogs?

Well, there doesn't seem to be a biological explanation or concrete answer regarding what Demodogs are, but, based on what we see of them in Season 2, it's pretty easy to deduce they are amphibious creatures — not unlike pollywogs — that feast on humans, travel in packs, and operate via a hive mindset. More than likely they're descendants of the Demogorgon from Season 1, and probably grew from the Demogorgon larvae Will coughed up into the sink in the Season 1 finale. As far as what controls the Demodogs, that's still up in the air, but my guess is the Shadow Monster has something to do with it.

Judging from Dustin's Demodog "pet," D'Artagnan, these creatures, unlike the Demogorgon, can form bonds. If they couldn't, Dustin surely would have been eaten by Dart when he ran into him late in Season 2 in the tunnels under Hawkins. While little else is known about these creatures, one thing is for sure: We probably haven't seen the last of them.

That's right, the ominous ending to Stranger Things 2 left things wide open, and let's not forget there is a Demodog just chillin in Joyce's freezer, so who knows what's in store for us in Stranger Things 3.

Late last year one of the show's creators, Matt Duffer, promised Season 2 would be "a little darker" and a "little weirder." Clearly Stranger Things 2 delivered on that promise, but now the question is how will Season 3 be even darker and weirder? Will the Demodogs be back? What about the Shadow Monster? Will there be an even more terrifying monster unleashed from the Upside Down?

Noah Schnapp, the actor who plays Will on the show, seems to think the Shadow Monster isn't entirely gone from Will's body, he recently told The Hollywood Reporter,

I personally think it's not all out of him. I feel like it can’t be. There’s this massive monster taking over all of Hawkins, and all you have to do is light a few fires and turn on a few heaters, and he’s gone? It just doesn’t make sense to me, really. He’s still there—I just don’t know how.

If that's true, then we're in for another crazy season in Hawkins. One of the show's creators and executive producers, Ross Duffer, recently spoke with The Hollywood Reporter about the finale and what we can *potentially* expect to see next season, as well; he says,

They’ve shut the door on the Mind Flayer, but not only is it still there in the Upside Down, it’s very much aware of the kids, and particularly Eleven. It had not encountered her and her powers until that final episode. Now, it knows that she’s out there. We wanted to end on a little bit of an ominous note.

I guess we'll just have to wait and see what's in store for us next season, but, in the meantime, we can keep trying to figure out what the hell a Demodog really is.