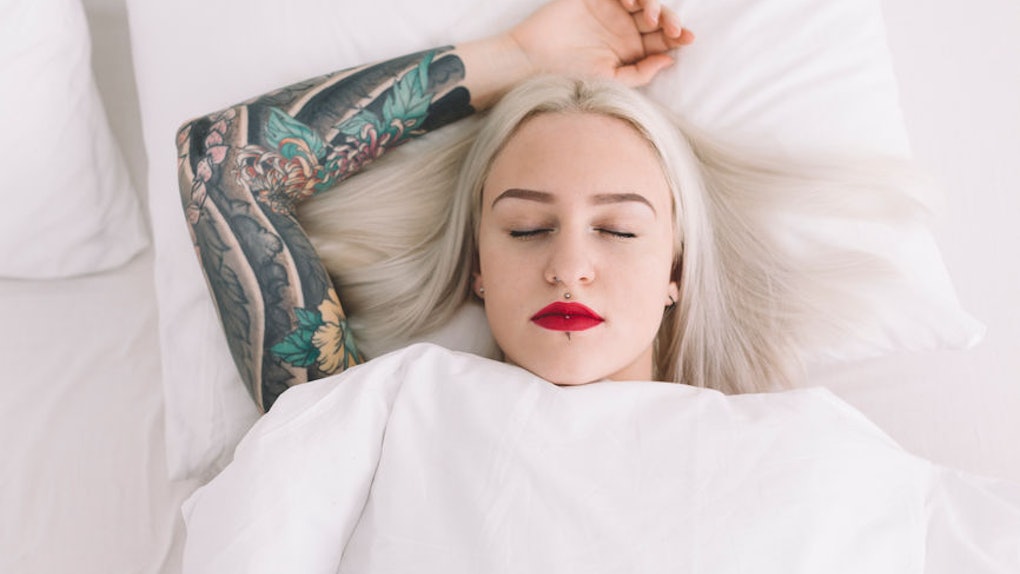 What Are Active Dreams? Here's Why You Talk In Your Sleep & Act Out Your Dreams

One of my favorite things growing up was going on vacation with my three siblings. Oftentimes, all four of us would cram into one hotel room together, annoying each other long after bedtime. Things always got even funnier in the morning, when we'd compare stories of weird things we all did throughout the night. While one of us would always talk in his sleep, another would repeatedly kick the person beside her. In case you don't know, when you do these seemingly strange things throughout the night, like talk in your sleep, it usually means you're having an active dream. But what exactly are "active dreams," and do they have any special meaning behind them? Like, should I actually be listening to what my brother says when he rambles on in his sleep?

First of all, there's actually an official way to refer to these odd sleep behaviors: According to the National Sleep Foundation, rapid eye movement sleep behavior disorder (RBD) is characterized by physically acting out your dreams. See, generally speaking, during rapid eye movement (aka REM) sleep, most people's bodies remain relatively motionless, almost in a state of temporary paralysis. But people with this sleep disorder might talk, shout, or even fly out of bed whenever they enter a REM stage of their sleep cycle. And I know the fact that it's called a "disorder" might make you feel worried if this is something you do in your own sleep, but the National Sleep Foundation says there typically aren't any major negative effects it can have on you, and "the good news is that RBD can usually be treated successfully."

Plus, if you're someone who's famous for chatting away while you're fast asleep, you're really not as alone as you might think. "Sleep walking and sleep talking occurs in roughly 25 percent of children and then around one percent of adults, so it’s not like it’s this unbelievably rare type of scenario," Michael Breus, Ph.D., a sleep specialist and author of the book The Power Of When, told SELF back in 2016.

In fact, according to Kimberly Friedmutter, member of the UCLA Health Systems Board, certified hypnotherapist, and author of the book Subconscious Power, your unique sleep behaviors might even be a sign that you have a very active brain. "Active dreaming is associated with creative people during busy or active times," she tells Elite Daily over email. And if you want to harness some of that creative power behind your active dreams, try writing down your nighttime visions once you're awake. Heck, you can even try jotting down a question for your subconscious to work on while you sleep, Friedmutter suggests. "The subconscious is a fantastic problem solver," she says.

But if you're someone who doesn't really like the fact that your SO is legit scared of you sometimes because of the weird things you yell out in your sleep, there are some ways to reign in your active dreaming habits. For example, if you like to have a glass or two of wine before bed, try skipping your evening nightcap for a while, because going to sleep with alcohol in your system might mess with your REM cycle and lead to those active dreams. According to The Drinkaware Trust, which is an alcohol education charity based in the UK, drinking too much alcohol before bed can keep you in a shallow sleep all night. Basically, the organization explains, "as the night goes on you spend less time in this deep sleep and more time than usual in the less restful, rapid eye movement (REM) stage of sleep."

Additionally, if you're moving around a lot or talking in your sleep, Intermountain Healthcare recommends making sure you're actually getting enough sleep each night, as the organization says sleep deprivation can potentially increase these instances of active dreams. In fact, according to Dr. David White, chief medical officer at Philips Sleep and Respiratory Care, sleep deprivation has a pretty strong link to sleep talking, so it's definitely crucial that you're clocking in those six to eight hours of rest that your body needs.

Luckily, though, being an active dreamer shouldn't really decrease the quality of your sleep overall, says White. "Although both RBD and sleep talking may mildly disrupt sleep, poor quality sleep is not usually a major problem," he tells Elite Daily over email. "Afflicted people are not generally sleepy during the day from poor quality sleep."

Of course, if you sleep next to your SO every night, or if you happen to share a bedroom with a roommate, your active dreaming might be disruptive to their sleep. But, thankfully, if the other person needs to wake you up for whatever reason, it shouldn't be too hard to pull you out of that state: The American Academy of Sleep Medicine says that, normally, it's pretty easy to wake up a person who's acting out their dream. Plus, once the person is awake, they're usually able to recall really vivid details of the dream, if you're interested in hearing about them (TBH, I would be).

Bottom line: Active dreams, and RBD in general, are pretty harmless, and if you ask me, it all sounds kind of fascinating. So if you're someone who has these types of dreams on the reg, try to make a point to write them down once in a while — you might just come away with some seriously mind-blowing stories.

More like this
Can I Exercise After A Flu Shot? Experts Recommend Listening To Your Body Post Vaccine
By Georgina Berbari
Your Favorite Way To Escape From Reality, As Told By Your Moon Sign
By Roya Backlund
Each Zodiac Sign Has An Animal That Goes With It & Here's Yours
By Valerie Mesa
Stay up to date