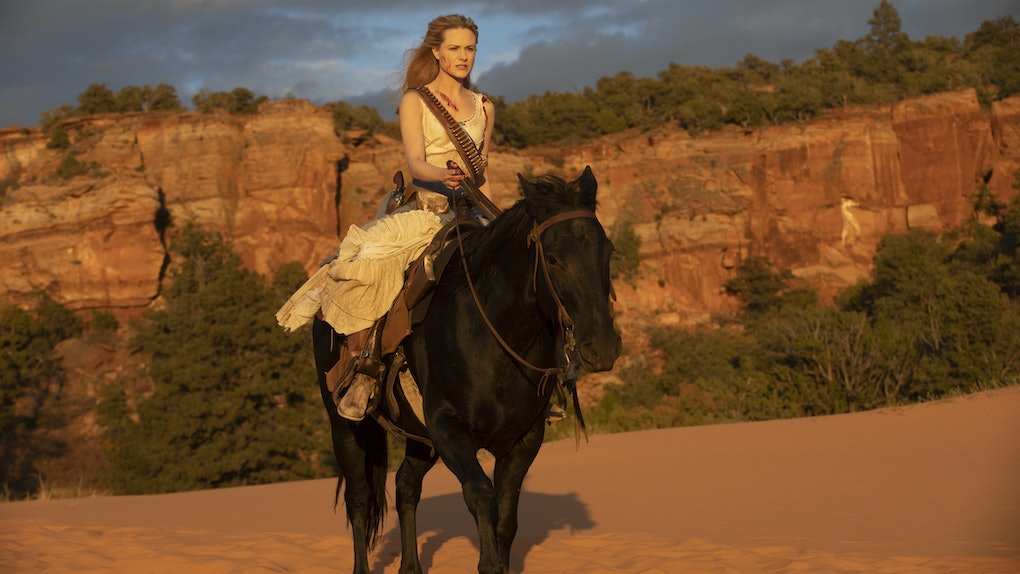 'Westworld' Season 3 Will Be A "Whole New World," So Start Theorizing Now

Westworld ended Season 1 with an act that changed everything in the show. When Dolores shot creator Robert Ford, she freed all the hosts from their programming, whether they knew it or not. Season 2 ended in a similar fashion, though on a much larger scale. With Dolores-as-Charlotte allowed to leave the Delos Island and head to the mainland, the show was now forever changed, with the main character no longer restricted to the parks and the labs beneath. With such a significant development, it's not surprising to hear Westworld Season 3 will be a "whole new world" when it returns to the airwaves.

Season 2 of the show eased the audience into the idea of the world outside the park, using flashbacks to introduce the concept of Dolores (and the other hosts) having experienced life outside the park on occasion. In every instance, though, the hosts' time outside the park was purpose-driven by their owners, either to be used as presentation fodder to bowl over the investors or as attractive servants during parties thrown at the Delos residence.

Now, for the first time, hosts will be leaving the park under their own power and on their own personal mission. However, this mission isn't known to the audience and probably will not reveal itself until deep into Season 3.

Even so, showrunners Jonathan Nolan and Lisa Joy suggest whatever fans expect from a season set outside the park, it's not even close to the reality of what they are planning. Speaking to The Hollywood Reporter on their Season 2 Emmy haul (Westworld came in only second to Game of Thrones in individual Emmy count, with 21 nominations), Nolan would only reveal the coming season would be nothing like fans have seen thus far.

I think it's a radical shift. What's compelling and appealing about these characters is that they're not human. As we said in the show, humans are bound by the same loops the hosts are, in some ways even smaller. You couldn't expect human characters to withstand and survive the kind of story that we're telling. The hosts have a different version of mortality, a different outlook. I think clearly with Dolores, as she's laid out, there is a longer view here, a larger set of goals. They're existential. They span eons. And that's a fascinating level of story to engage in.

Lisa Joy was even more direct:

Considering the length of time between Westworld seasons, rebooting the show with a new pilot is probably a smart move. Season 1 aired in fall of 2016, and Season 2 didn't come along until nearly 18 months later this past spring. Though Nolan and Joy have gotten down to the business of creating new scripts for the next installment, HBO has made it clear they expect the process once again to take longer than usual, and the 10 episodes comprising Season 3 may not arrive until as late as 2020.

Until then, Westworld Season 2 will hopefully score Emmy gold this coming fall. The Emmys air on NBC on Sept. 17, 2018.

More like this
This 2-Way Mirror Theory About 'Cruel Summer' Could Explain The Whole Thing
By Rachel Varina
Netflix's 'Shadow And Bone' Virtual Experience Is Full Of Grishaverse Gems
By Ani Bundel
When Will 'Riverdale' Season 5 Return In 2021? Its Mid-Season Break Is Long AF
By Rachel Varina
Stay up to date