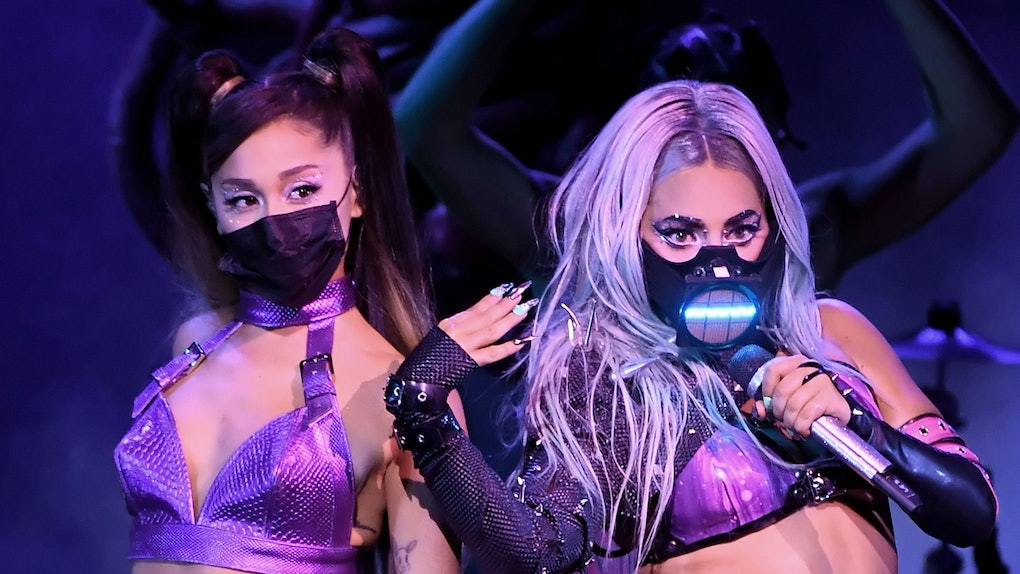 Was Ariana Grande At The 2020 VMAs? Fans Are Super Confused

Ariana Grande fans were glued to the MTV VMAs on Sunday, Aug. 30, in anticipation of seeing their queen perform live for the first time in months. While Grande delivered an epic collab performance with Lady Gaga, it didn't take long for viewers to notice the duet was the only time Ari was *present* at the show. The performance had fans wondering: Was Ariana Grande even at the 2020 VMAs? The details are confusing.

Ahead of the show, Grande raved about MTV and the measures they took to ensure the safety of all performers and crews as they filmed their performance amid the coronavirus.

"Happy VMA day," she captioned an Instagram pic. "So excited for u see our first rain on me performance tonight ! @ladygaga is f*cking incredible and i’m so honored to share this moment with her and u all. also just want to say thank you to @MTV being so diligent in making this such a safe & healthy experience for all of the performers and crew involved. it’s so greatly appreciated and i can’t imagine how difficult it was to figure out! see u all so soon!"

So of course, fans expected to see Grande on stage at the show, but things were more complicated than her just showing up.

After Gaga accepted two awards on behalf of herself and Grande for their smash hit "Rain on Me," Twitter users were super confused why Grande only showed up for the performance. Many fans picked up on the fact that their performance was pre-taped, but still, people wanted to know why Grande didn't make a live appearance.

According to Page Six, in order to enforce safety measures, many performers, including Grande, did their red carpet interviews, practiced their rehearsals, and taped their performances earlier in the week to limit exposure to other artists and VMAs crew.

No one can blame Ari for playing it safe and doing whatever she had to do in order to practice social distancing. At the end of the day, at least she delivered an epic performance with Gaga, live or not.